After a 12-year wait, the seventh-generation Nissan Z is finally here, and it looks like it’ll be the Japanese sports car enthusiasts have been clamoring for. Unlike the Miata, it’s got plenty of power. Unlike the GR 86, it’s turbocharged. Unlike the Supra, it has a manual transmission. Could the Nissan Z be the best of all worlds?

And yes, the name is Z, Nissan Z. There’s no more numeric designation in the name. That’s because, as expected, the engine actually drops in size. But what it loses in displacement from the 370Z’s naturally aspirated V6, its new 3.0-liter gains with twin turbos. The engine churns out 400 horsepower at 6,400 rpm and 350 pound-feet in a broad torque curve spanning from 1,600 to 5,600 rpm. Those are the same power specifications as the engine that powers the Infiniti Q60 Red Sport – and we’re certain that’s no coincidence.

Both trim levels – Sport and Performance – will come with this engine. That’s 68 more ponies than the outgoing 370Z, and 18 more than a Toyota GR Supra; it’s also a 30 percent increase in torque. Nissan didn’t reveal 0-60 times, but says 0-60 times improve by an estimated 15 percent. That should put it in the 4.2-second range. Nissan also promises good throttle response, thanks to small-diameter turbochargers and a turbo speed sensor. The engine also utilizes e-VVT electronic variable valve timing on the intake side to adjust valve lift on the fly.

The sheetmetal looks quite similar to that of the Z Proto concept. Minor changes to the door handles and the addition of side marker lenses and a fuel filler cap were necessary for the leap to production. It’s a handsome design that references the game-changing 240Z and the 1990-96 300ZX, which was the last twin-turbo Z we got.

Hard points look similar to that of the 370Z for a reason: the new Z shares its 100.4-inch wheelbase to the decimal point. But it would be unfair to call it a 370Z clone with a new skin. Nissan says it has overhauled the unibody and chassis for improved rigidity and its suspension features new geometry. The front aluminum double-wishbones, for example, provide an increased caster angle to improve straight-line stability. Nissan says the rear multi-links have also been reconfigured, but didn’t provide details.

The aspect that really hurt the outgoing 370Z late in its life, though, was the interior. Its decade-old technology really made the car seem like a dinosaur. Thankfully, that has been wholly rectified. 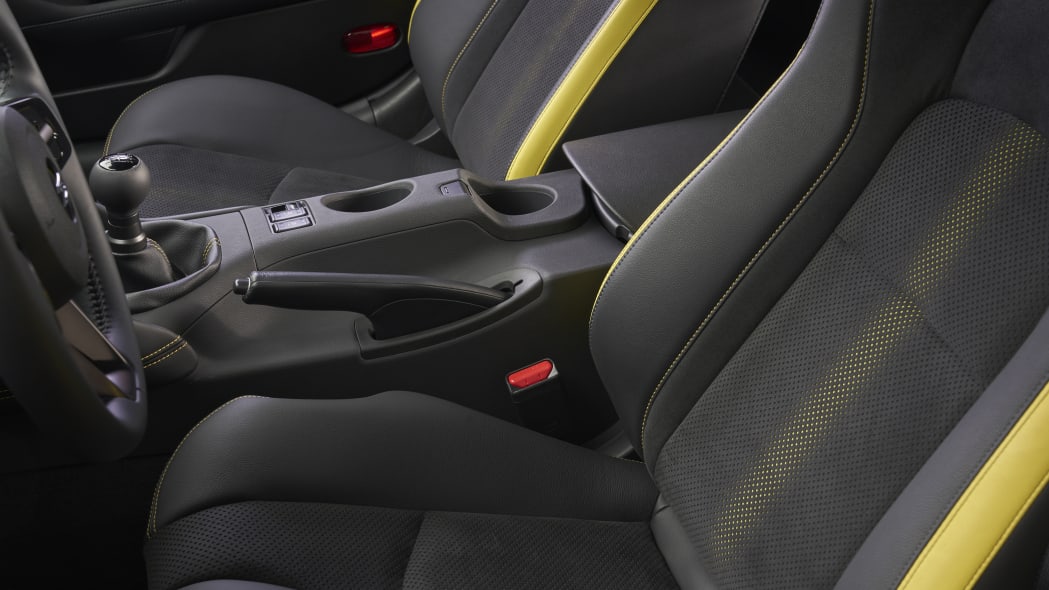 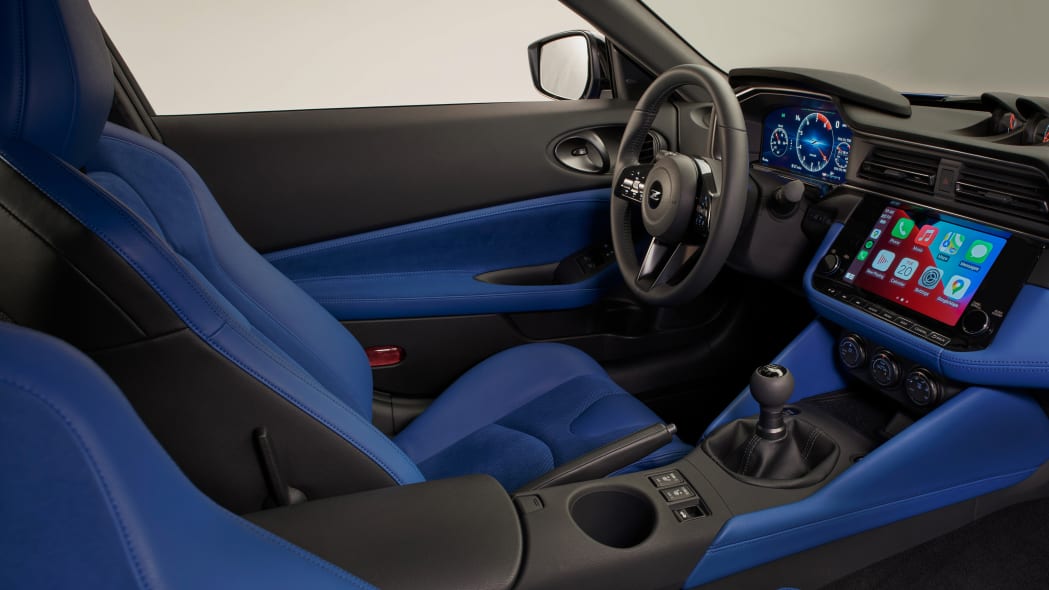 The first thing you’ll notice is the presence of a new three-mode, 12.3-inch digital instrument display. “Normal” shows a balanced mix of vehicle stats and navigation; “Enhanced” moves the tach and speedometer to the edges for maximum navigation map area. “Sport” mode adds a g-force meter and boost gauge while placing the tach front and center. A shift light at the top allows drivers to see it without taking their eyes off the road.

The center stack is even more improved, topped with a traditional three-pod cluster that shows boost pressure, turbine speed (for some reason?) and battery voltage. Below that, the Z is finally modernized with a standard 8-inch infotainment touchscreen that offers Bluetooth (hallelujah!), Android Auto/Apple CarPlay, satellite radio, and hands-free text. Two 12-volt power outlets and two USB ports (Type-A and Type-C) are included as well.

The centerpiece of the interior, though, is the aforementioned manual transmission. The 6-speed feeds power through an Exedy clutch and a carbon-fiber composite driveshaft – items that were pretty exotic for a production car when the 370Z debuted. Launch assist control is available on Performance trims, helping deliver jerk-free acceleration and the 370Z’s pioneering rev-matching feature returns for a second act. A 9-speed automatic is also available, and can be outfitted with aluminum paddle shifters borrowed from the GT-R. 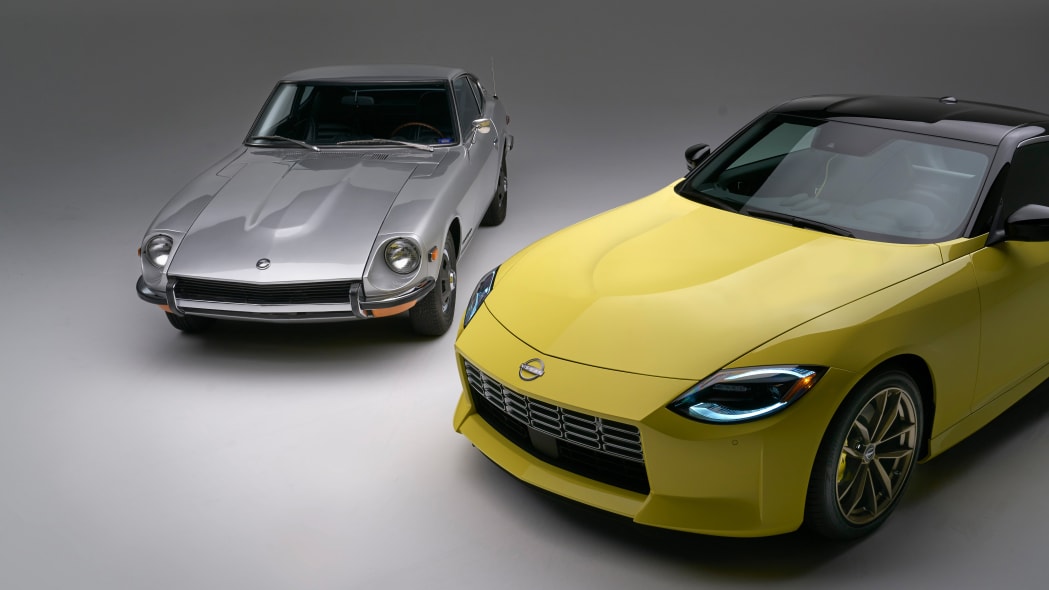 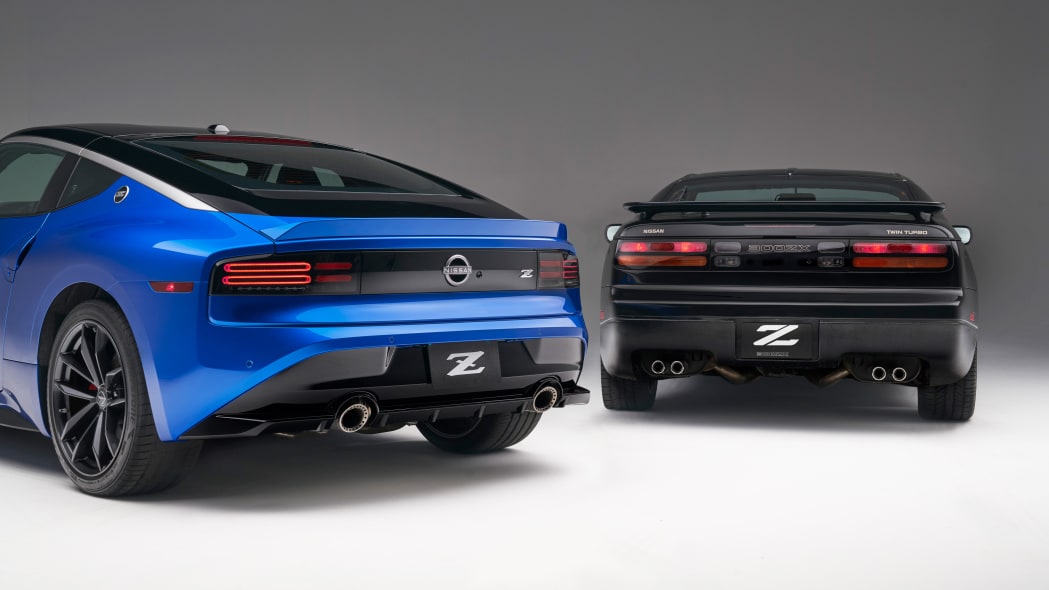 The 2023 Nissan Z will be available in a variety of colors. Black Diamond Metallic, Rosewood Metallic, and Gun Metallic will all be available as monotones. Brilliant Silver, Boulder Gray, Seiran Blue, Ikazuchi Yellow, Passion Red TriCoat, and Everest White Pearl TriCoat will come with a contrasting black roof. We finally have a wider choice of interior colors as well, with black, red and blue rounding out the trio of options.

Nissan is getting in on the launch editions as well, with a Z Proto Spec that will be limited to just 240 units for the U.S. It’ll be distinguishable by yellow brake calipers with the Z logo and bronze 19-inch RAYS aluminum-alloy wheels. Inside, it’ll be adorned with exclusive leather-appointed seats with yellow accents, yellow stitching throughout the cabin, and an exclusive shift knob on manual-equipped cars.

Pricing has not been announced. We expect to know more about that as the 2023 Nissan Z nears its on-sale date of spring 2022.