The Ford Mustang Mach-E as we have known it has lacked “the punch.” Oh, it delivers the immediate low-end torque delivered by every EV, and can plant you firmly into its soft front seats well enough. A 0-60 time of 4.8 seconds for the Premium AWD is nothing to sneeze at. But the punch to the chest you get when nailing the right pedal, as in a Tesla or Polestar 2? That feeling that can take your breath away, knock the sunglasses off your head and make you laugh at its absurdity? Nope, nada, missing in action … until now.

Welcome to the party the Ford Mustang Mach-E GT. For those unfamiliar with good, old-fashioned Mustangs, those two extra letters have signified the presence of a V8 engine and therefore a palpable performance upgrade over the four- and six-cylinder base engines. The Mustang GT is also where most car enthusiasts even begin to consider Ford’s pony car. And honestly, as impressive as every other version of the Mach-E has been, that’s probably going to be the case for the electric crossover Mustang, too. The GT is the one you want.

Nail the accelerator from a standstill and you get the punch. Goodbye sunglasses, enjoy the back seat. The GT produces 480 horsepower and 600 pound-feet of torque, which is definitely a performance upgrade over the next rung down, the Premium AWD at 346 hp and 428 lb-ft. The additional GT Performance upgrade has the same 480 hp, but produces 634 lb-ft. 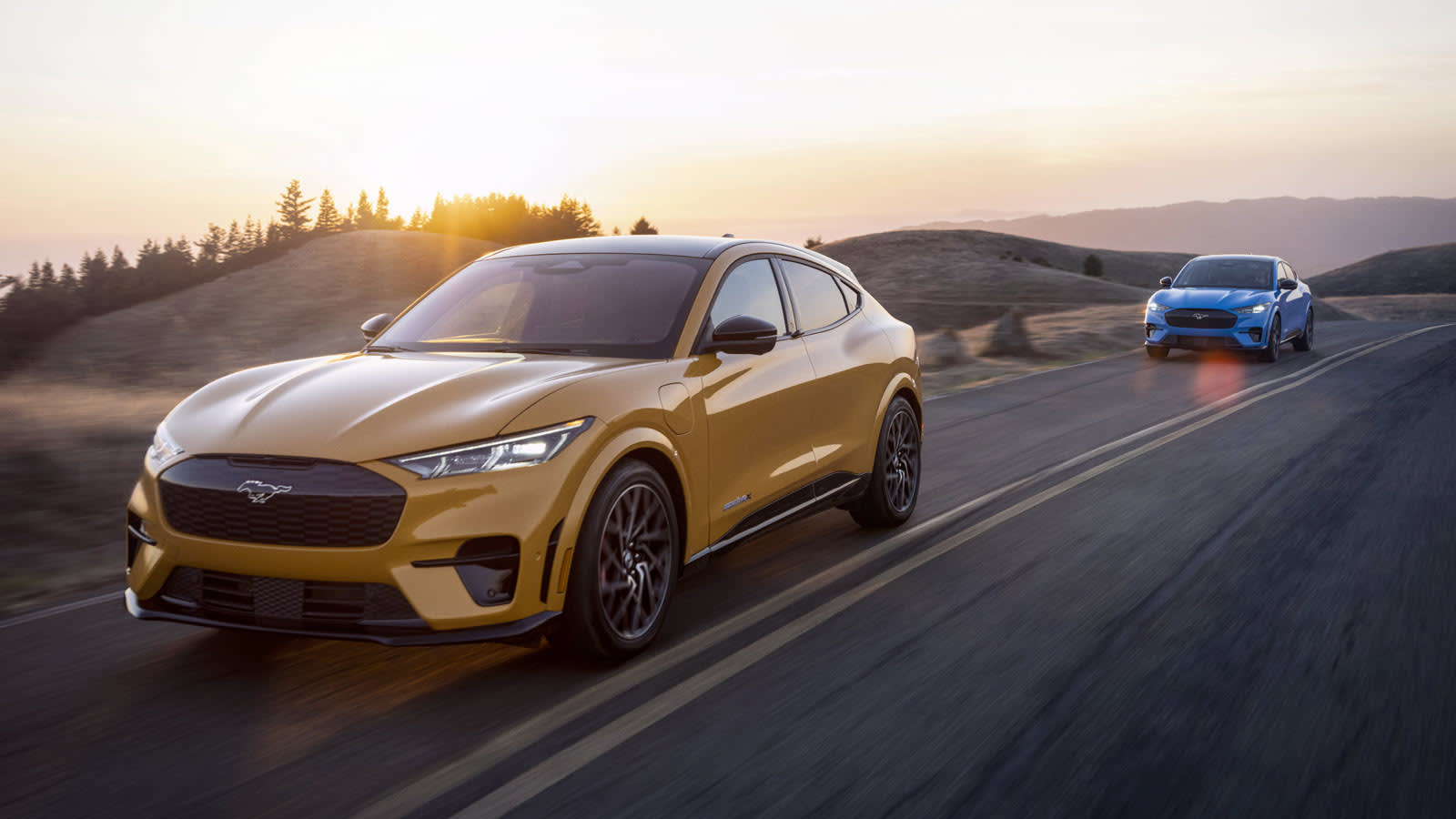 Ford’s stopwatch clocks the GT from 0-60 mph in 3.8 seconds, with the GT Performance’s extra torque and stickier summer rubber cutting that time down to 3.5 seconds. That’s 0.4 seconds slower than the quickest Tesla Model 3 Performance, but … shrug. There’s more to cars than a stop watch.

OK, so in the case of EVs, there’s also electric range, and here the GT is outdone (like basically every other EV) by Tesla. The GT carries an EPA-estimated range of 270 miles, which is the same as the Premium AWD. The GT Performance drops to 260 miles. Now, if it significantly outperforms its EPA range as other Mach-Es have in real-world testing, while Tesla slightly underperforms as it has, the effective difference between that same 315-mile Model 3 Performance won’t be that great. Theoretically at least. There would still be a significant difference compared to the Model 3 Long Range version, which is rated at 353 miles, and is only 0.4 seconds off the GT’s 0-60 time. Though, again, shrug.

In the end, though, the more you punch it in the GT, the worse that range is going to get. It shares the same 88-kilowatt-hour “Extended Range” battery as the Premium and California Route 1 trim levels, and although it does gain some extra efficiency due to its lower suspension, your mileage will very much vary. 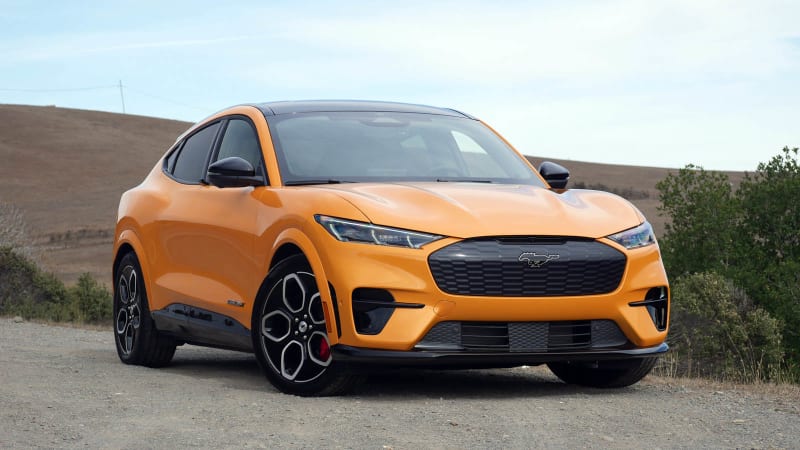 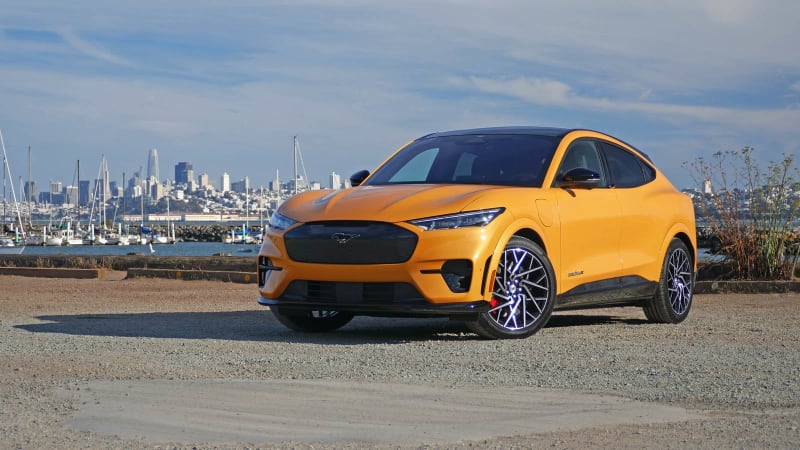 Speaking of that suspension, there’s more going on with the GT than just the extra power and torque. The suspension is indeed 10 millimeters lower, and features unique tuning. It’s notably firmer, resulting in much tidier body motions through successive tight corners. The entire Mach-E feels smaller and less crossovery now as a result. We even autocrossed the thing as part of the first drive event and it didn’t seem like a ridiculous thing to do. Handling theoretically gets upgraded with the GT Performance (above right), which gets Ford’s Magneride magnetically controlled dampers, but we honestly didn’t experience that much of a difference between the fixed suspension in the GT and adjustable one in the GT Performance. Yes, Magneride firms things up in Sport mode — sorry, “Unbridled” mode — but it’s not such a significant difference that you should feel bad about skipping the GT Performance.

That’s especially so since Magneride also doesn’t do much for the ride quality, which is often as much a reason to select it as its handling benefits are. Both suspensions offered in the Mach-E GT provide a definitively firm ride. Choppy pavement can toss you around a bit, and with a family aboard, it might draw complaints. It’s sport-tuned without question, and even with Magneride, you have to accept the trade-off its improved handling brings. That said, we could live it with quite happily.

The GT’s steering was also tuned to be sportier, though the difference is less obvious compared to the Premium AWD (in that we didn’t notice at all without back-to-back drives). There is also minimal effort difference between Normal — sorry, “Engage” — mode and “Unbridled,” though that’s honestly not that big of a deal. There doesn’t need to be. As it is, the Mach-E GT’s steering is precise and appropriately weighted, though it still feels pretty artificial and could use more feedback for a performance-oriented vehicle, crossover or no. It continues to be the one dynamic element that should clearly be more like a Mustang’s, and therefore draw a closer family connection. It’s certainly one reason why a Porsche Macan and 911 feel related despite being wildly different mechanically. 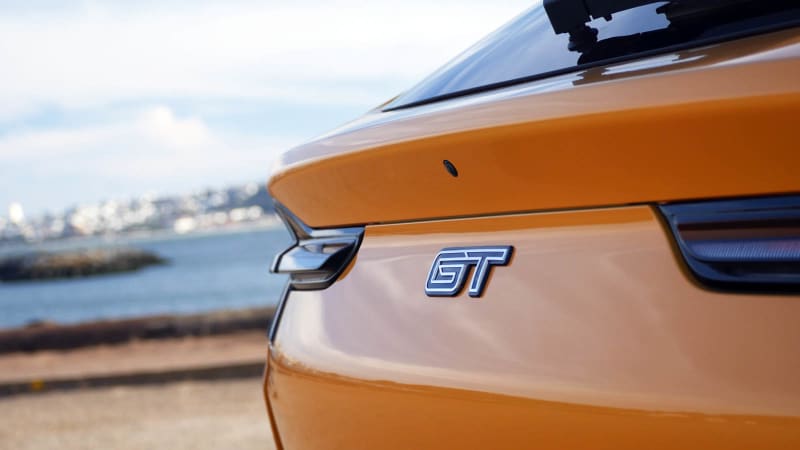 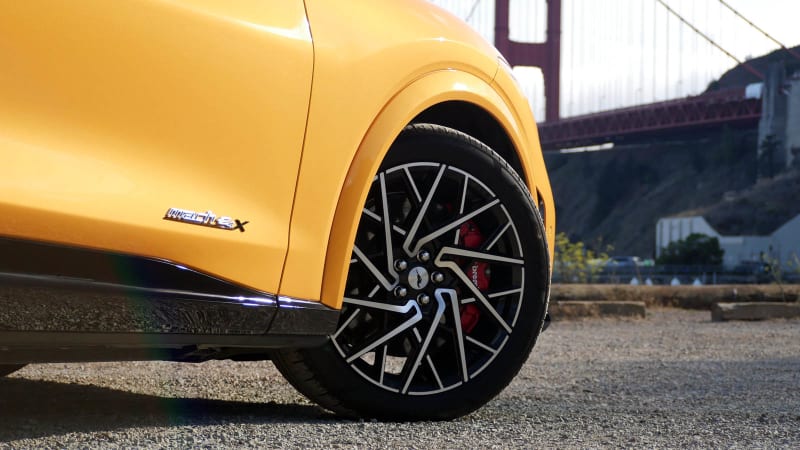 The GT also gets larger brakes with red calipers (362 mm in GT, 385 in GT Performance), as well as an extra “Unbridled Extend” mode intended specifically for short stints on an autocross or other comparable track scenario. In order to address the inherent limitation of electric motors in this environment, and specifically, their cooling, “Extend” mode limits maximum power in order to maintain more consistent power, eliminates regenerative braking in order to prevent extra electric current from going through the system, and proactively cools the batteries. Throttle and brake mapping is also changed along with traction control settings. Again, we actually did autocross the Mach-E GT, and that was at the end of the day after numerous other journalists had hammered away at it for hours. It seemed no worse for extreme wear.

There’s also one more GT Performance upgrade, and it may actually be the most valuable of them all. While the regular GT shares every other Mach-E’s flat, squishy seats that tend to oddly pinch the middle of my lower back, the GT Performance exclusively gets new Ford Performance seats with actual bolstering, including for the shoulders. We’re not talking the regular Mustang’s Recaros here, though, and those extra bolsters don’t seem tight enough that they’d be an issue for huskier folks. More importantly, the seats are a bit firmer and were therefore more supportive during a comparable amount of time spent in the saddle of both GT versions. For what it’s worth, I also didn’t find them pinchy. Much like those Recaros, the GT Performance seats need be optional on more Mach-E variants. If it’s a Mustang, it should have Mustang-like options. 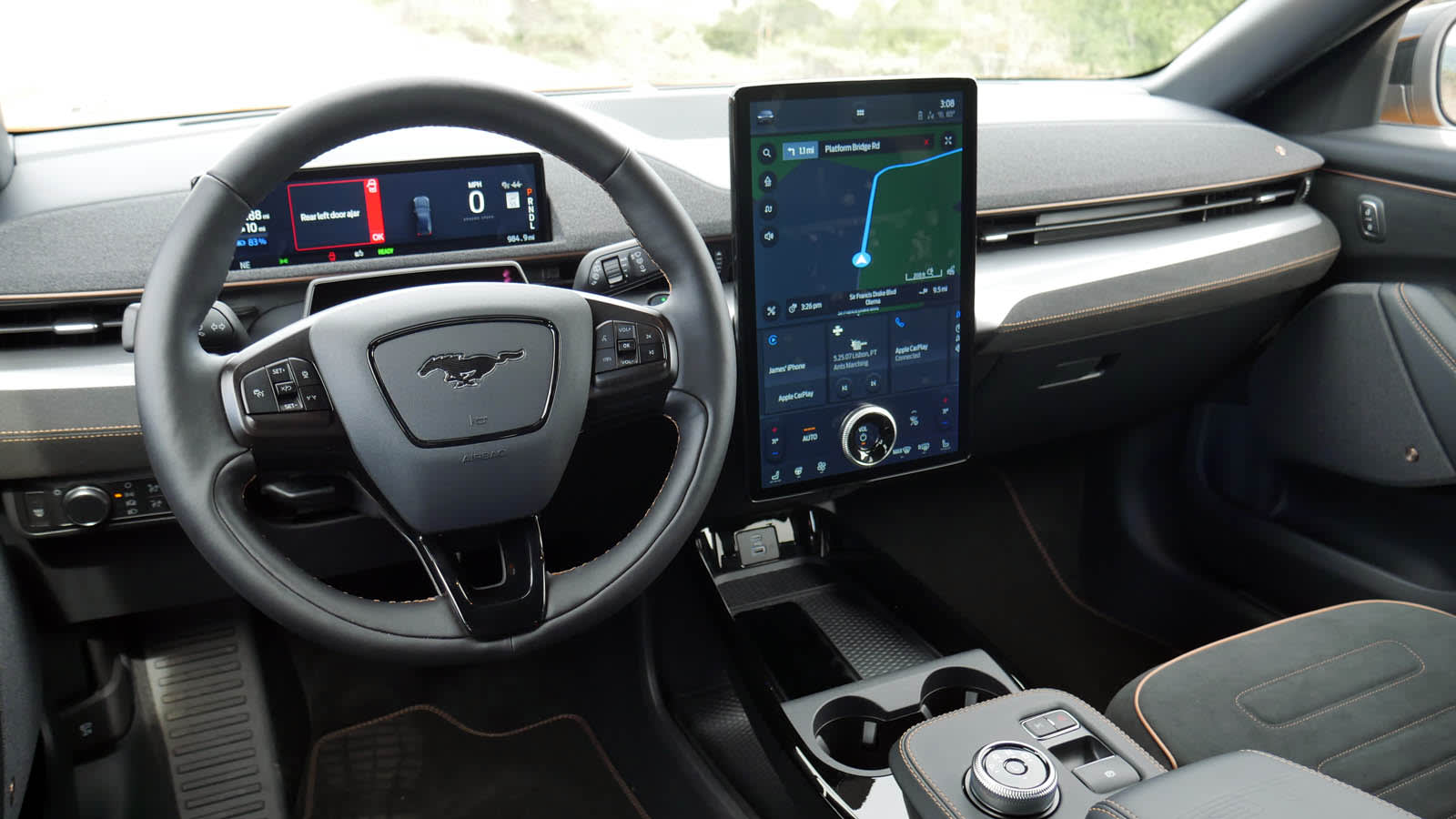 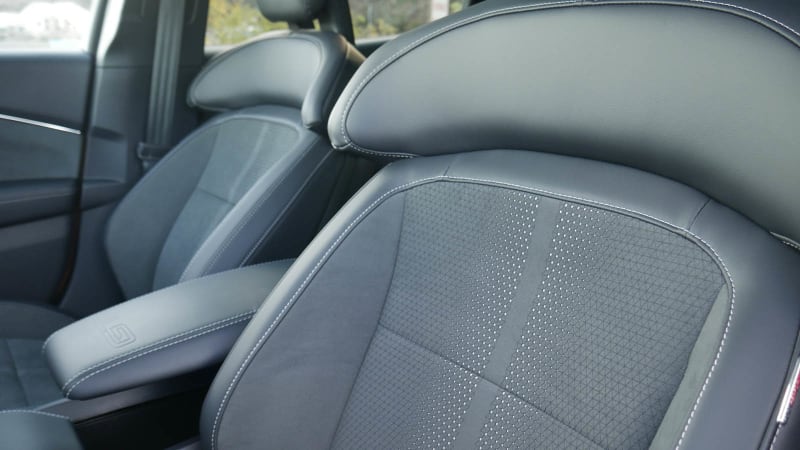 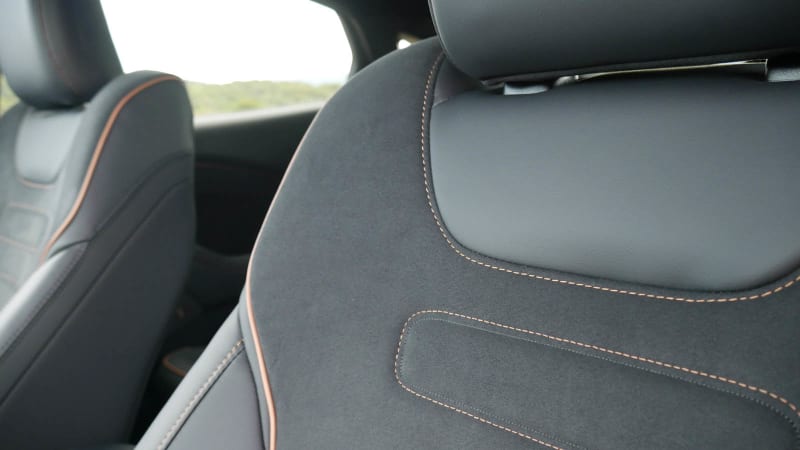 And if it’s an EV, you shouldn’t always have to drive it. For that, the Mach-E can now be outfitted with Ford’s Blue Cruise advanced adaptive cruise control and hands-free steering system. This was my first time testing it, though Autoblog has previously and more thoroughly reviewed it. I might have given it a more extreme test than Joel Stocksdale did, though, as I was driving on the tight, winding stretch of Highway 101 north of the Golden Gate Bridge that can get a bit hairy given the amount of other cars. There were a few clenching moments, and I kept my hand primed near the wheel, but the system did indeed perform as required. I can’t say I really enjoyed sitting there with my hands on my knees while watching an unremarkable strip of highway lined with shopping centers (turns out steering a car can be mildly entertaining, who knew?!), but hey, it worked.

Visually, you can identify the GT thanks to its blacked out grille, which to these eyes at least, represents the Mach-E at its best. The pony emblem inside it even lights up, which was apparently far more difficult to achieve than you might imagine. At the back, the pony is replaced by a GT badge, just like the regular Mustang. Inside, there is different ActiveX simulated leather upholstery and the available option of snazzy bronze accents on the seats and dash. The dash trim is also upgraded with a metallic finish, while we were pleased to see that Ford has performed an over-the-air update to the instrument display. It addresses our complaint that the speedometer and battery level were minimized in favor of a prominent driver assistance graphic. It’s sensible enough now that it was hours before we realized we once had that complaint (though we still wish Ford offered different design options, perhaps some form of retro one to inject a bit more Mustang).

Add it all up and the Mach-E GT is absolutely the one you want. Firmer ride aside, why wouldn’t you? Unfortunately, things cost money. The GT starts at $61,000, including the destination charge and not including the $7,500 federal tax rebate or state-level rebates. The GT Performance starts at $66,000.  By contrast, a similarly equipped Mach-E Premium AWD with the same Extended Range battery goes for $56,900. The base GT seems like it’s worth the premium, but seats aside, the GT Performance seems less so. The GT also starts about $3,000 north of the Model 3 Performance, and although its acceleration and range are worse, we have time and again stated the Mustang Mach-E is the better-built car with an interior that meets our old-fashioned tastes for things like a separate instrument panel and air vent adjusters. There’s also a lot to be said for its greater interior space, quieter cabin and general refinement. Oh, and the Mach-E definitely now delivers “the punch.”