The 2022 Porsche Macan GTS is the closest thing to a mega hot hatch that we’re going to get from Porsche. Drop the air suspension down into its lowest height setting, crank the seat down, and drop the hammer. What comes next is a rollercoaster of a technical treat that’s far different than anything you’ll experience in another compact SUV.

Porsche taking the Macan so seriously is nothing new. Its small SUV has been an utterly astounding performer from the start of its first and only generation. To our delight, it’s aged like a fine German Riesling, which is in character for any Porsche product. We already know the Macan’s future, as Porsche has lightly sketched it out for us. This mid-cycle refresh for 2022 will be the last before the battery electric version comes out. In a way, this updated Macan is serving as a stop-gap between now and the next-gen car. Porsche needed its best-seller to stay fresh and hot on dealer lots, and while the GTS we’re driving won’t be the volume version, it’s now the hottest of them all. More on that in a bit, though.

For 2022, the most obvious change to the entire Macan line is the face. Porsche has redesigned the grille and side air intakes to fully engorge the front end, ditching any semblance of separation between the two elements. It’s just one big, black, gaping maw that dominates the front from hood-to-bottom. Some neat patterning and texture helps break up the sea of black plastic, but there’s no getting around its new, jarring appearance. If you don’t like it in photos, we can promise you it looks better in person, but our eyes still prefer the pre-refresh design. Other exterior changes include a new rear diffuser with the same textured finish as the grille and new wheel options. Our personal favorites are the 21-inch RS Spyder wheels (pictured) on the GTS — they’re without a doubt the best wheels we’ve seen on a Macan yet.

It’s inside the 2022 Macan that you notice its most vital and important updates. The center console of the Cayenne (and a number of other Porsche products) is adapted for duty here, which means the hard buttons are all replaced with touch-capacitive buttons spread out on a sheet of piano black trim. It looks cleaner (at least before it’s coated in dust and fingerprints) than the outgoing button-strewn console, and it brings the Macan’s interior design language up to date with other Porsche models. Also in line with other Porsche models is the new steering wheel, which is pulled straight from the 911. 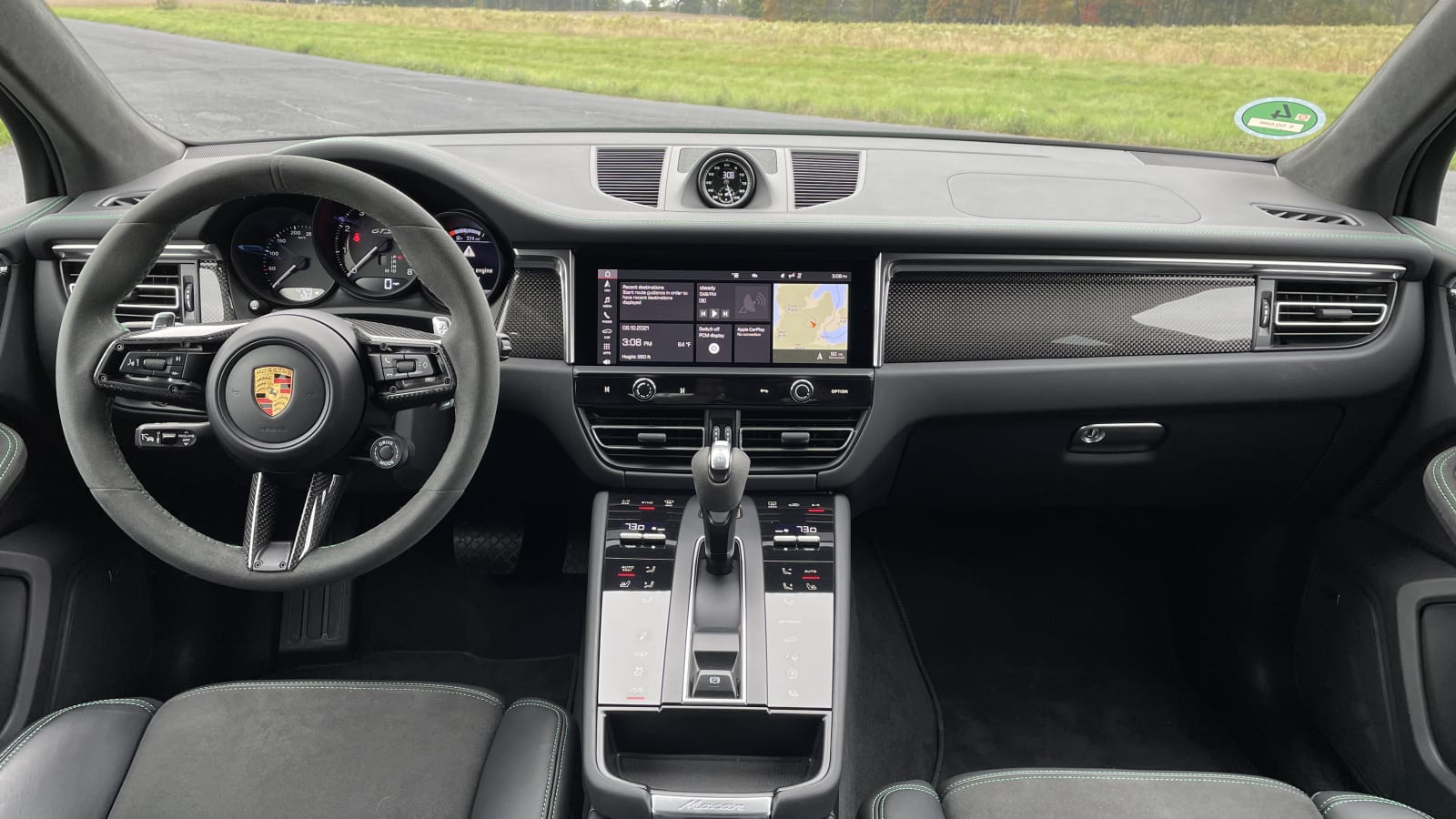 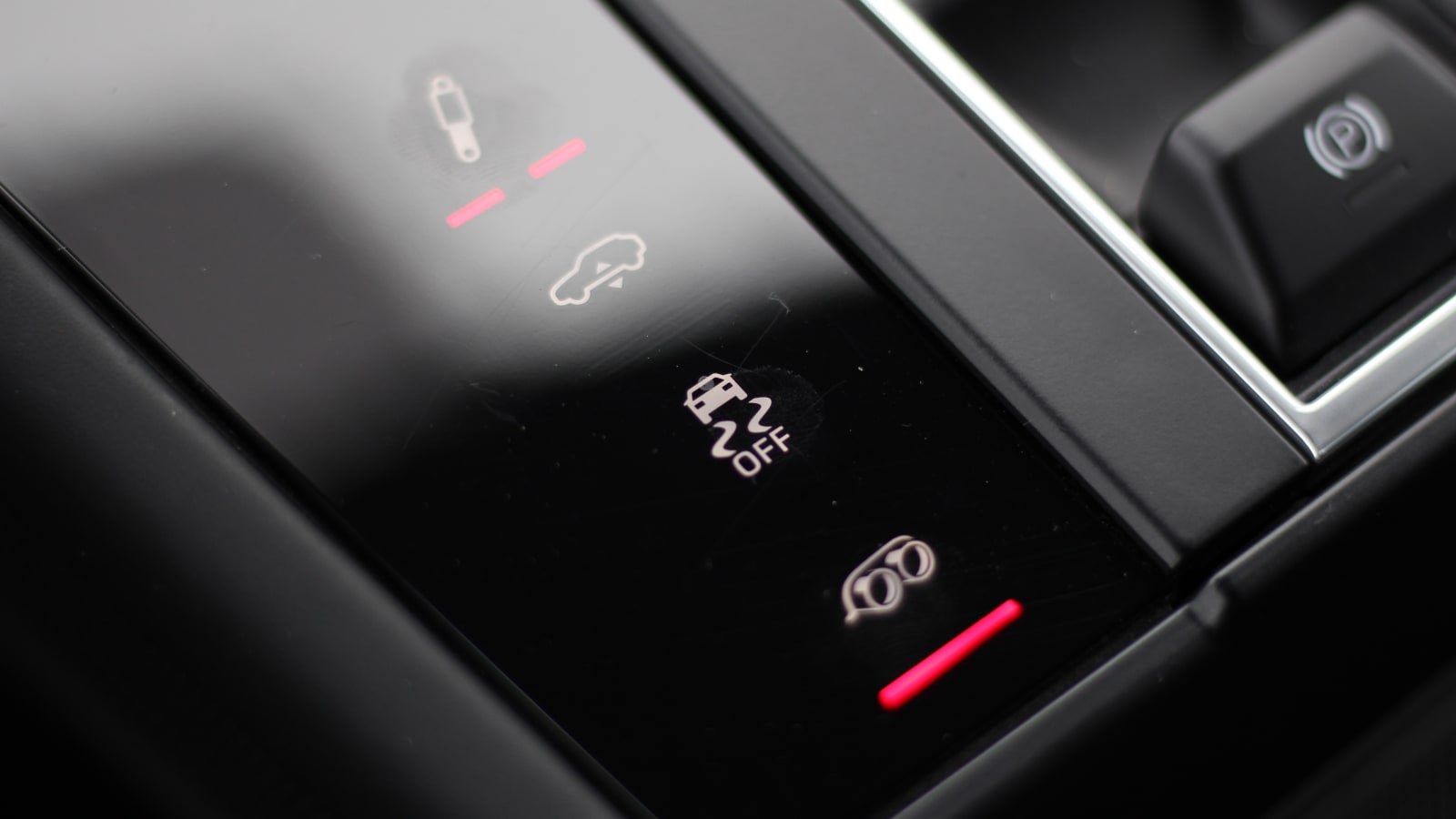 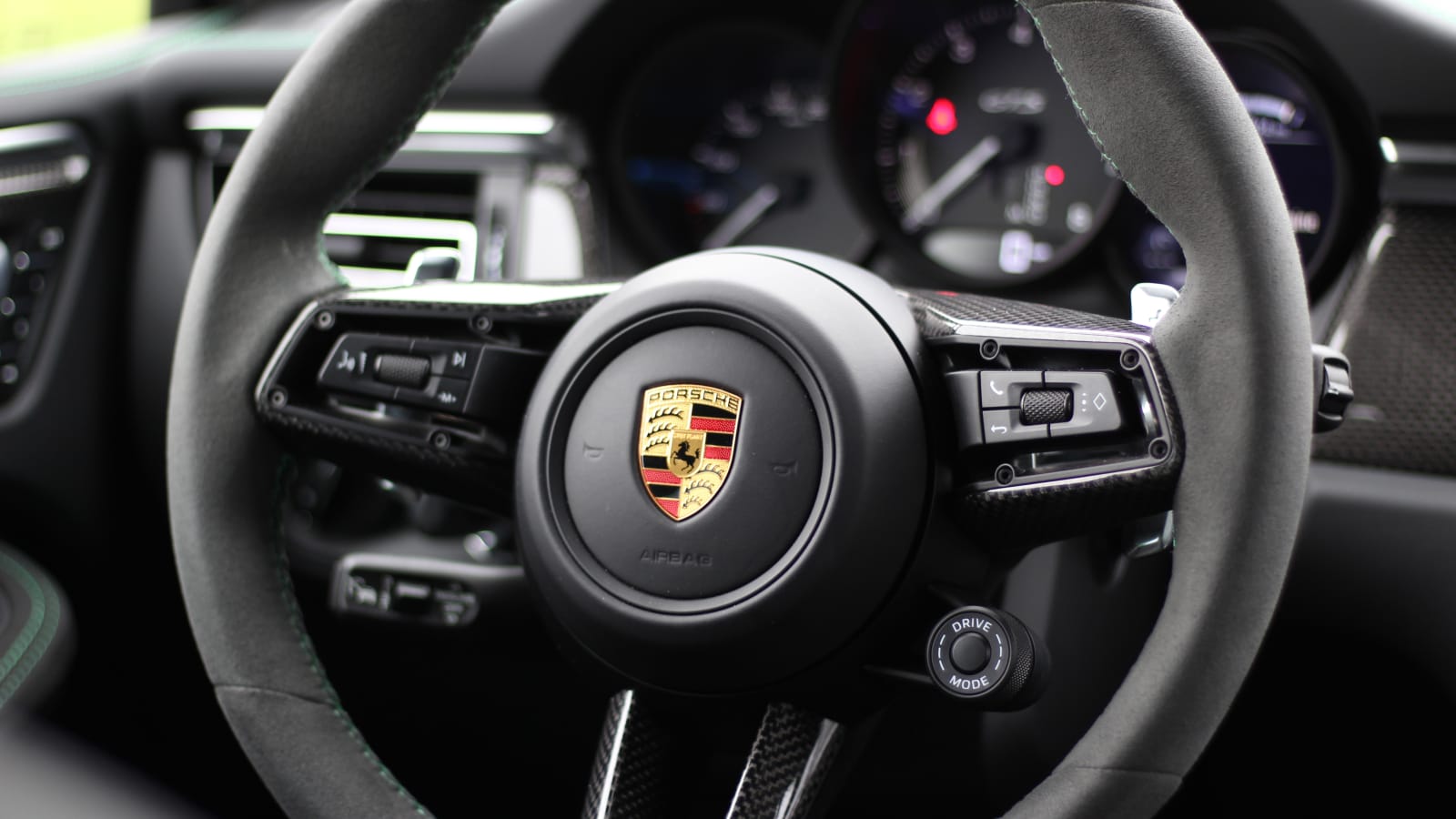 Sitting within the new, fancier console is a different gear lever that’s been shortened to better integrate into the new look. Above the console and gear lever is the same 10.9-inch infotainment touchscreen as before, and unfortunately, it’s still not capable of running Android Auto. That functionality is coming to Porsche’s updated PCM 6.0 infotainment system, but the 2022 Macan isn’t running that software, so wireless Apple CarPlay is the most we get. Also carrying over unchanged is the instrument cluster. The Macan is still rocking the mostly analog cluster it had before, skipping the mostly digital cluster (the analog tachometer remains) that the Cayenne, Panamera and 911 get. It’s perfectly fine, but the graphics in the single digital screen are looking their age at this point versus other Porsches.

A fair number of equipment changes come along for the 2022 ride, as well. Every model now comes standard with proximity entry (that should’ve been standard long ago), auto-dimming Sport Design mirrors, the adaptive headlights and heated front seats. You also get lane-departure warning, automatic emergency braking and rear parking sensors standard, but any other driver assistance systems are in the pay-for options list.

As for the GTS that we’re driving, it’s now the range-topping Macan. Basically, the Turbo model is KO’d and its top-dog 2.9-liter twin-turbo V6 good for 434 horsepower and 406 pound-feet of torque is swapped into the GTS. Meanwhile, the old de-tuned 2.9-liter that powered the previous GTS (375 horses and 383 lb-ft) drops down the ladder to the 2022 Macan S. The new GTS has a 0-60 mph time of 4.1 seconds with the Sport Chrono Package, which is identical to the old Turbo, but its top speed of 169 mph is 2 mph faster. Autobahn bragging rights: Check. 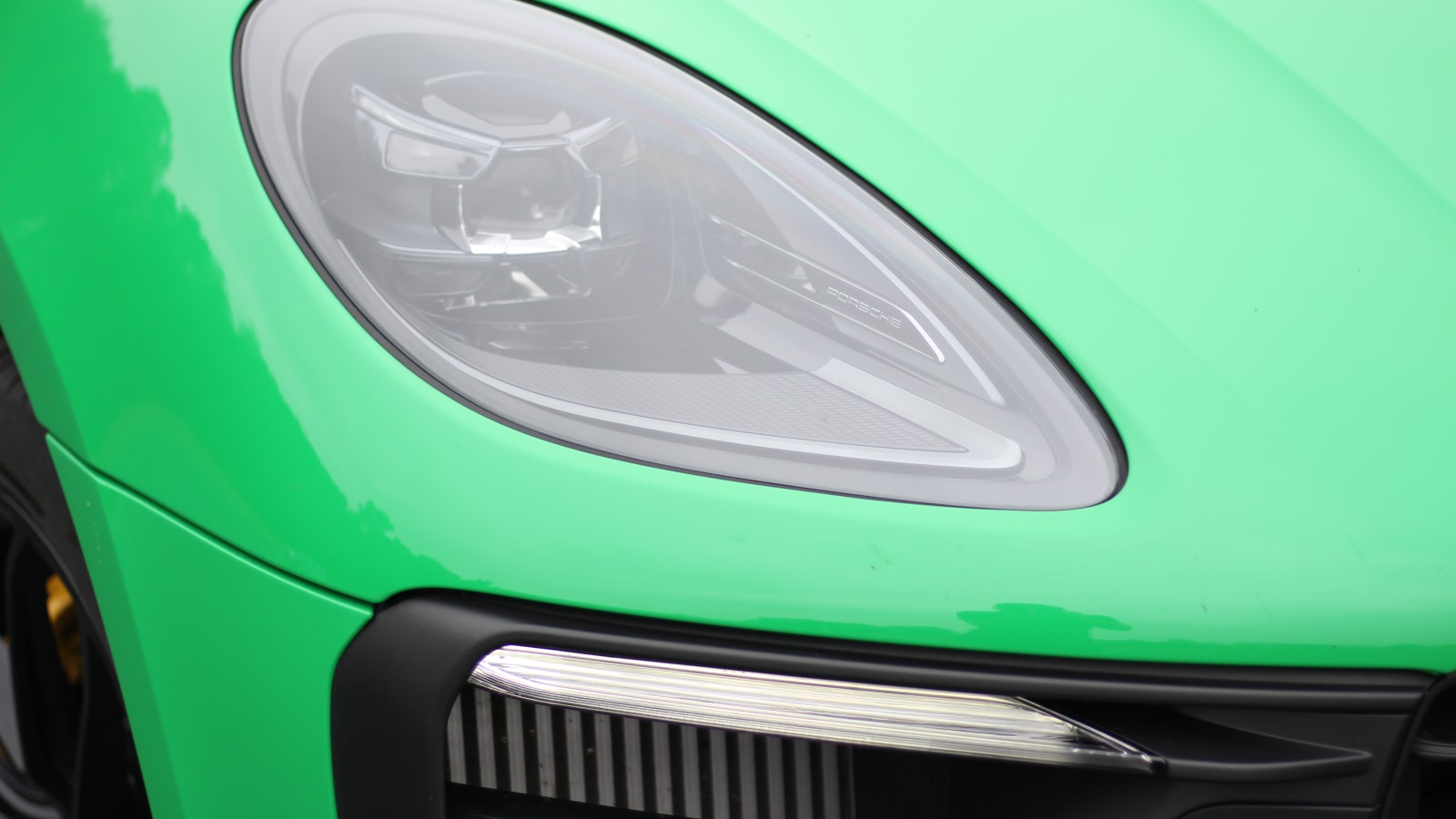 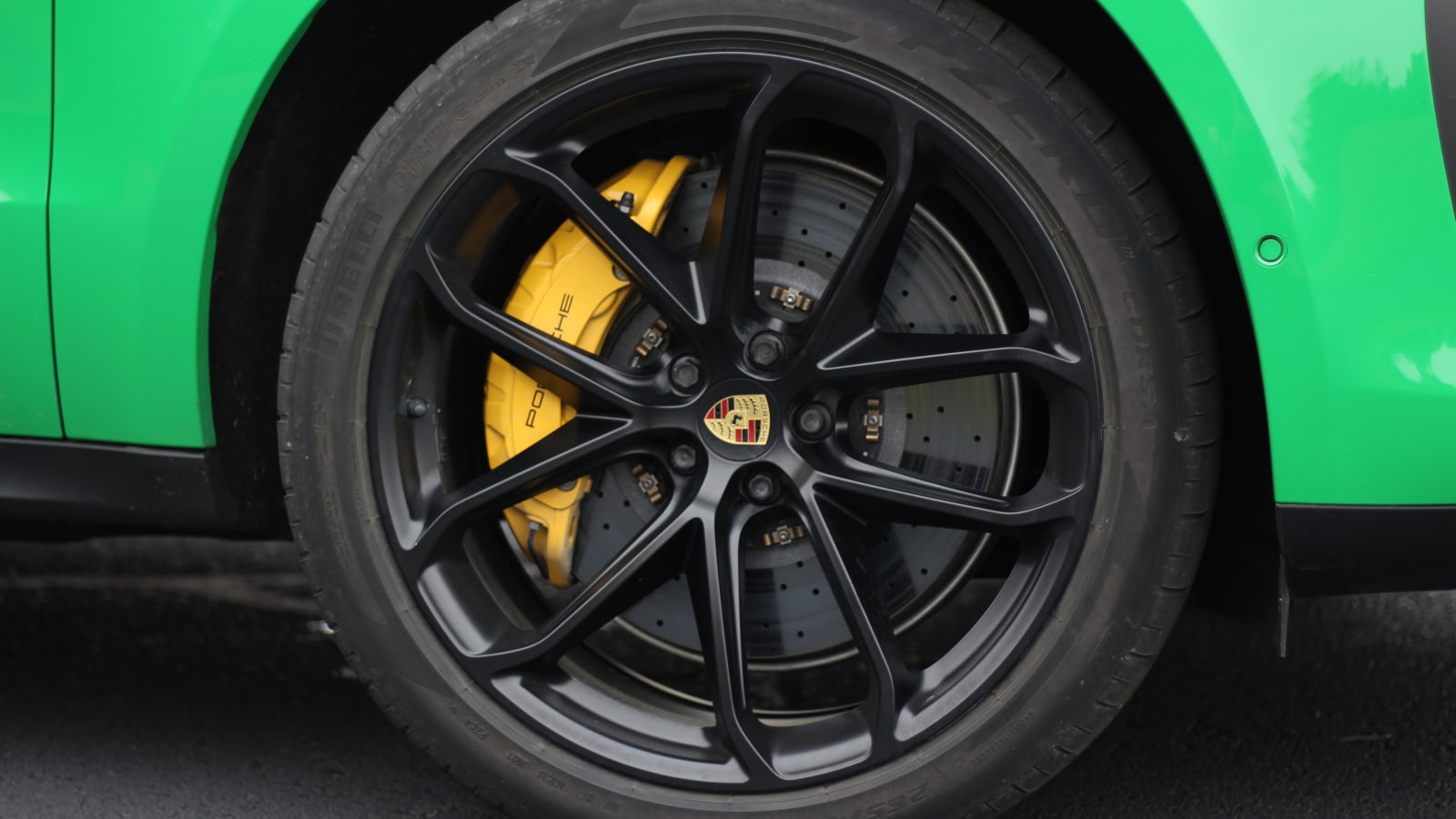 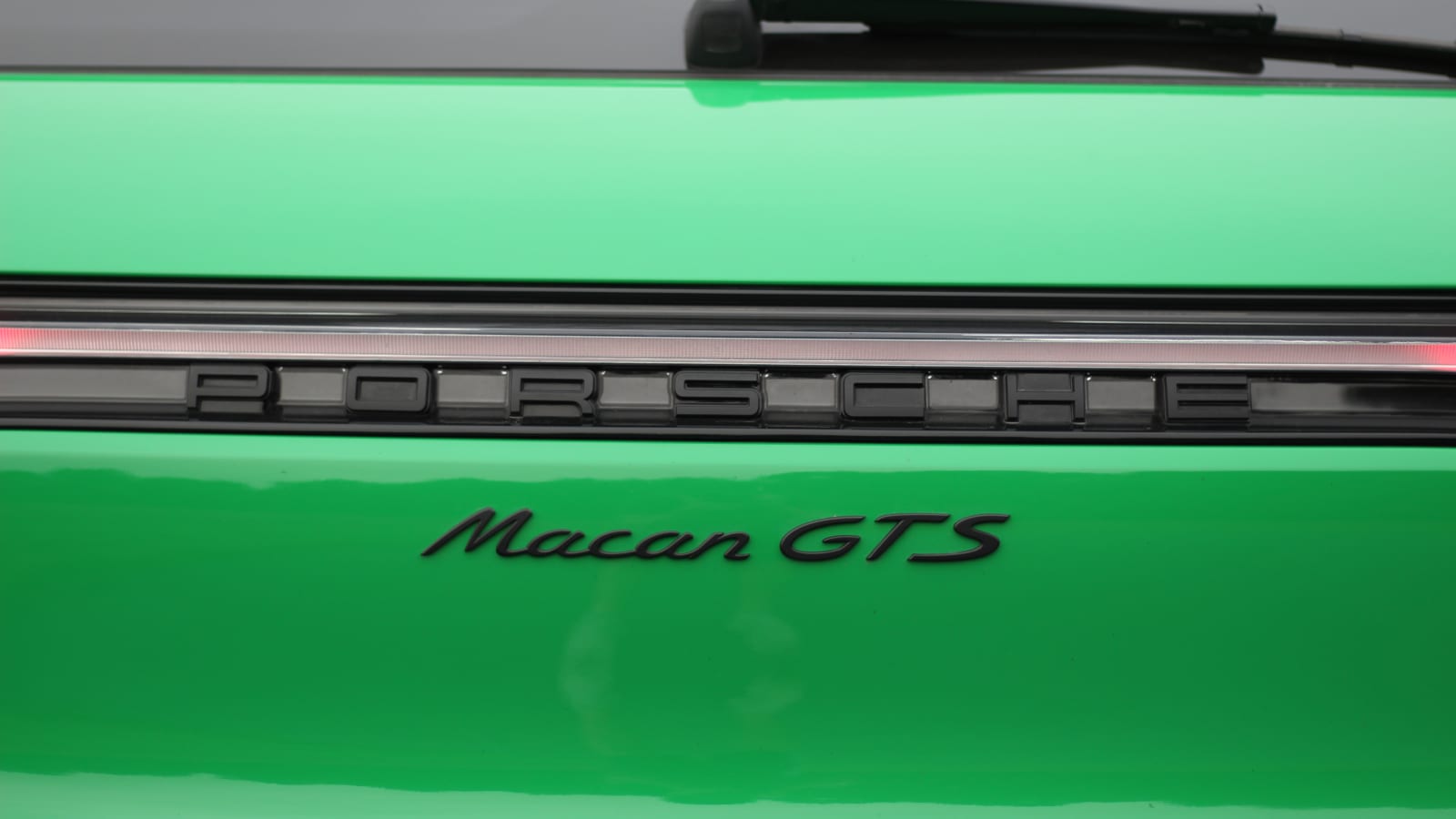 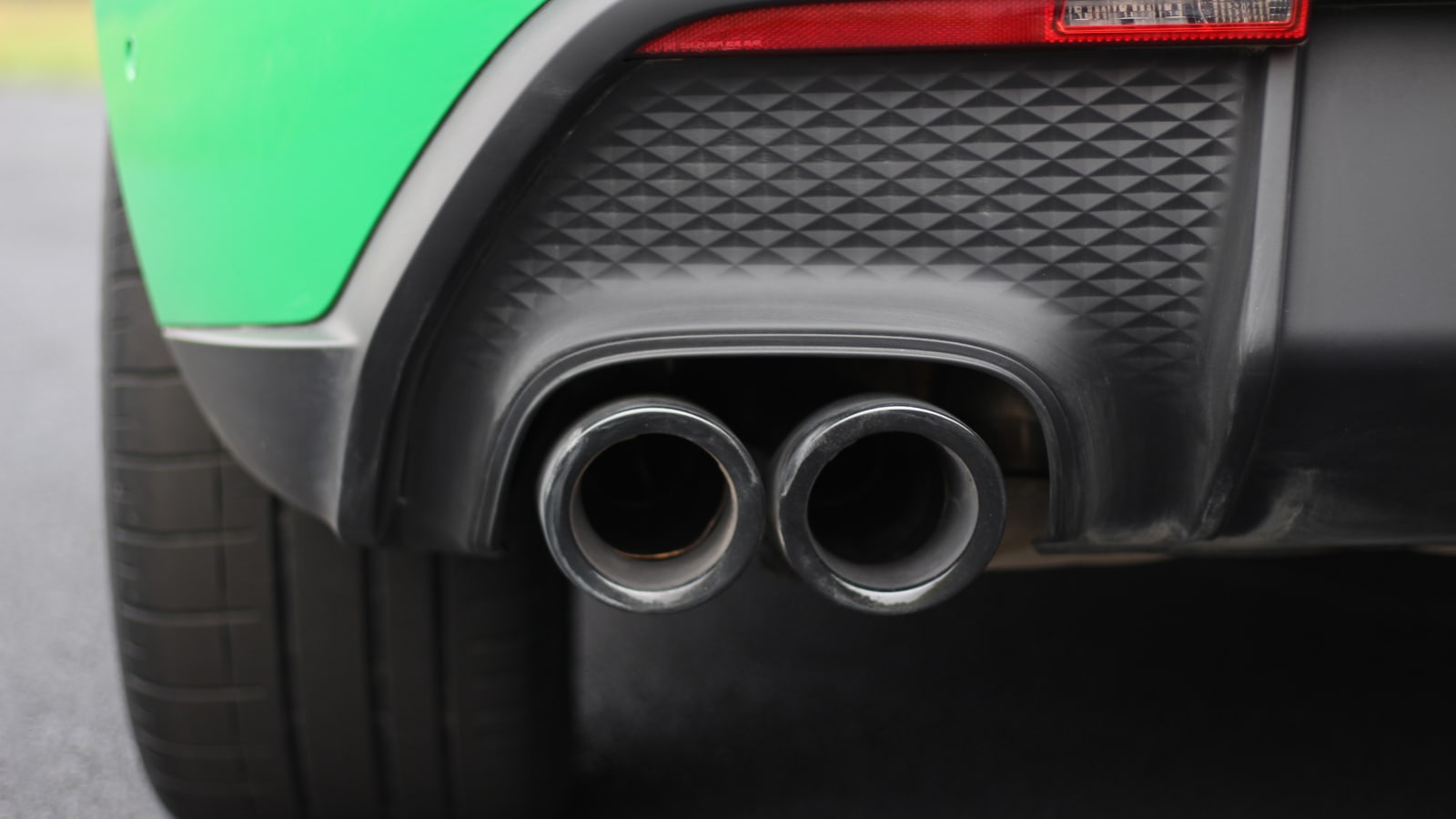 Per usual with Porsches, the launch control system is hilariously fun. It revs up to 5,000 rpm, then lifts the nose up like a boat as it slams you back into the heavily-bolstered seats. Where the Turbo’s exhaust was a little tame, the GTS-specific exhaust system is not. The full effect is best felt under bridges and overpasses where you get to hear it spit a gnarly tune out under throttle, then burble and pop on the overrun. No other Macan goes or sounds as good as the GTS now.

Porsche’s adaptive air suspension for the GTS carries over, but it’s been tuned to be even stiffer than before, and the previous GTS suspension was already more hardcore than the Turbo’s. Newly calibrated dampers mean the GTS is now 10% stiffer on the front axle and 15% stiffer on the rear. Porsche says the new damper tune features a greater breadth of adjustability, too, so you have improved comfort in Normal mode, and higher stiffness in Sport Plus. Additionally, the Macan features new bump stops and strut mounts that Porsche says enhance damping forces and improve body control.

With everything in full attack, there’s no better-handling small SUV you can buy. We’ll also note that our tester had the $12,010 GTS Sport Package that adds Porsche Torque Vectoring+, the Sport Chrono Package, 21-inch GT Design wheels wrapped in Pirelli Corsa summer rubber and a laundry list of appearance equipment. If you want the special wheel and tire package that gives this Macan its insane levels of grip (seriously, it’s nuts), you need to spec this rather expensive package. But it’s worth it. 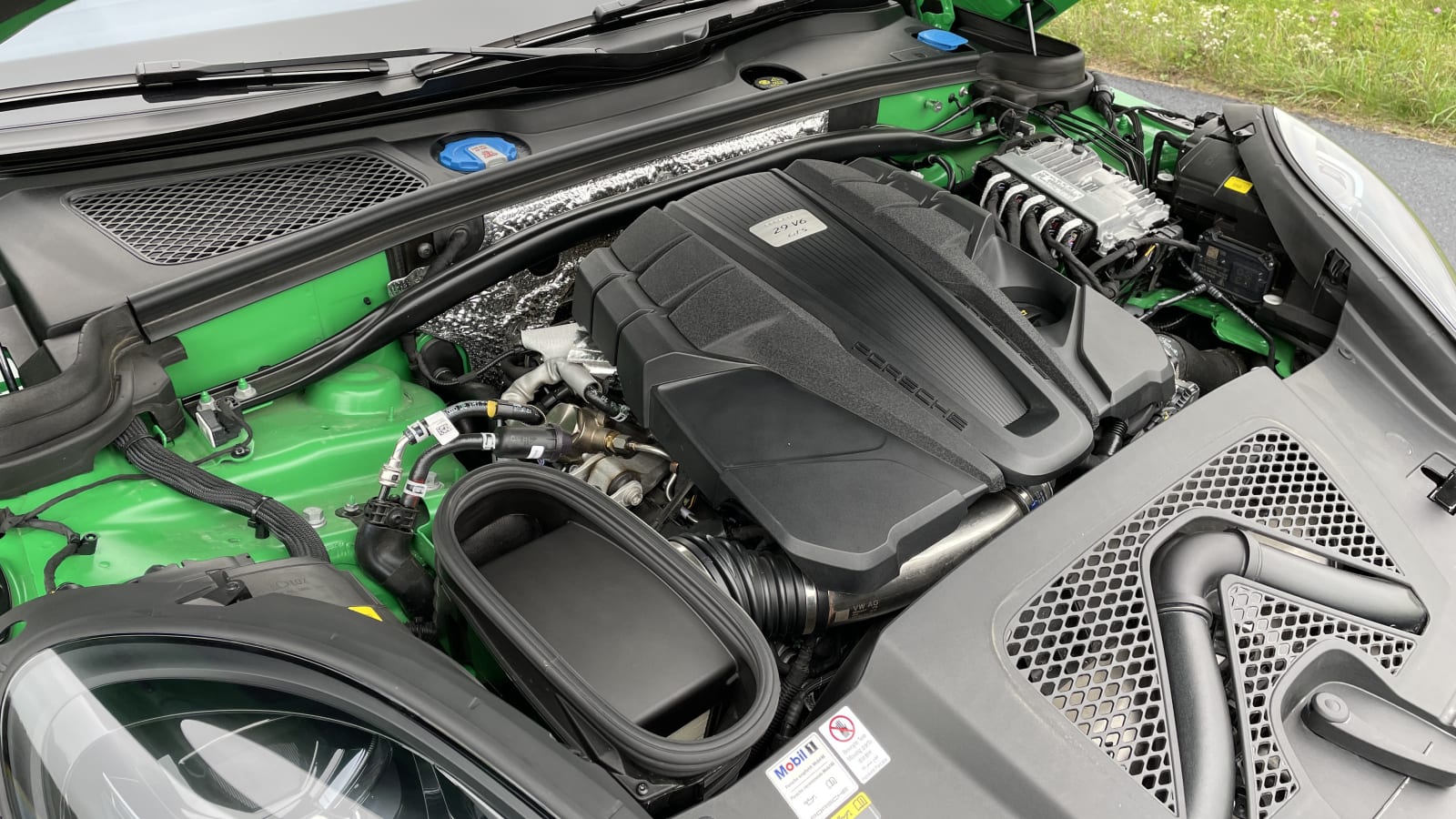 Try as you might, it’s practically impossible to catch the Macan GTS out. It corners with absurd flatness, remains balanced and easily guidable through a corner, then sticks like glue on the way out. Just flatten your foot through curves, and the car will sort it all out with maximum and visceral effectiveness. Porsche’s almost reached the level of being too clinically good with this car. Others like the Alfa Romeo Stelvio Quadrifoglio or Mercedes-AMG GLC 63 S seemingly encourage you to be a little silly or irresponsible with the throttle to get a tail wag here and there. With the Macan? Nope. It’s dead set on keeping you focused on the mission ahead, and making sure that every last ounce of torque is used on moving you forward, not sideways.

That’s not to say the Macan GTS is devoid of fun. We had oodles of it on a crisp, fall afternoon, wringing out everything this Python Green Porsche had to offer. And then when you’re done banging off wicked-quick shifts with the seven-speed PDK, you can cruise home in luxurious comfort, just as you should be able to in an SUV. The ride is controlled and firm, but never harsh. It’s such a far cry from the racetrack-stiff and lowered experience found in the Sport Plus mode that it emphatically confirms the Macan GTS’ ability to be a dual-threat daily driver and fun-mobile all in one. 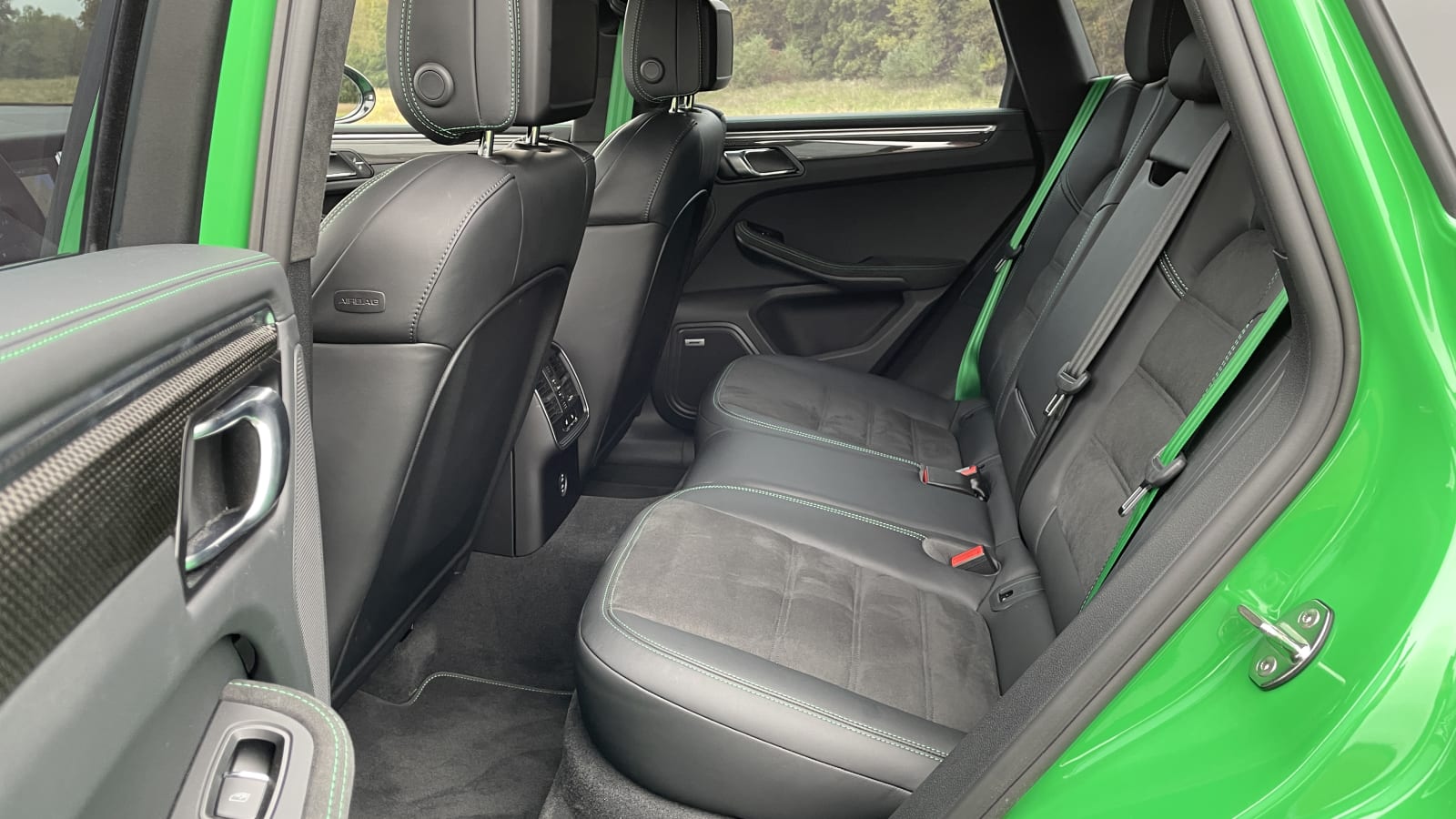 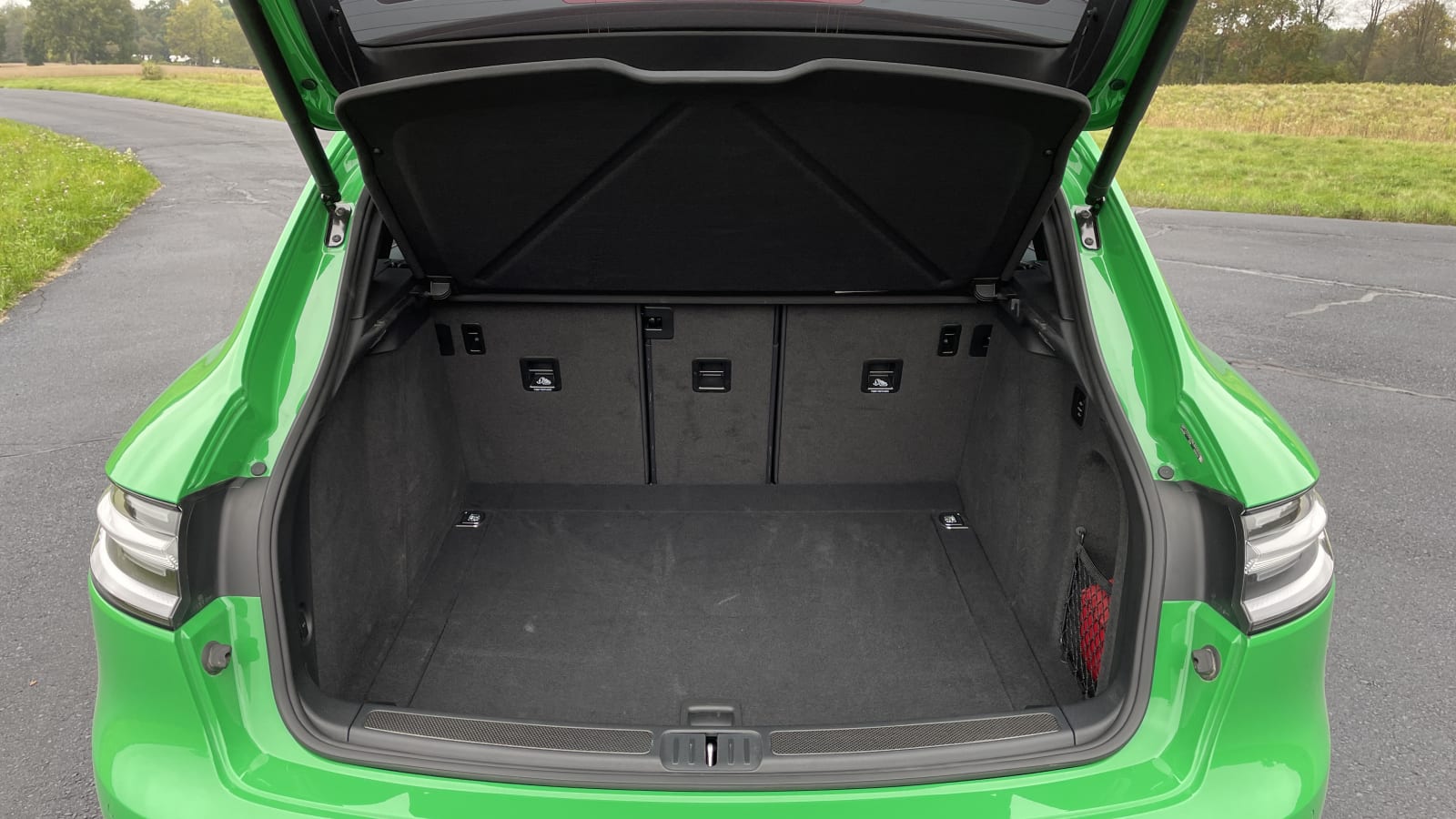 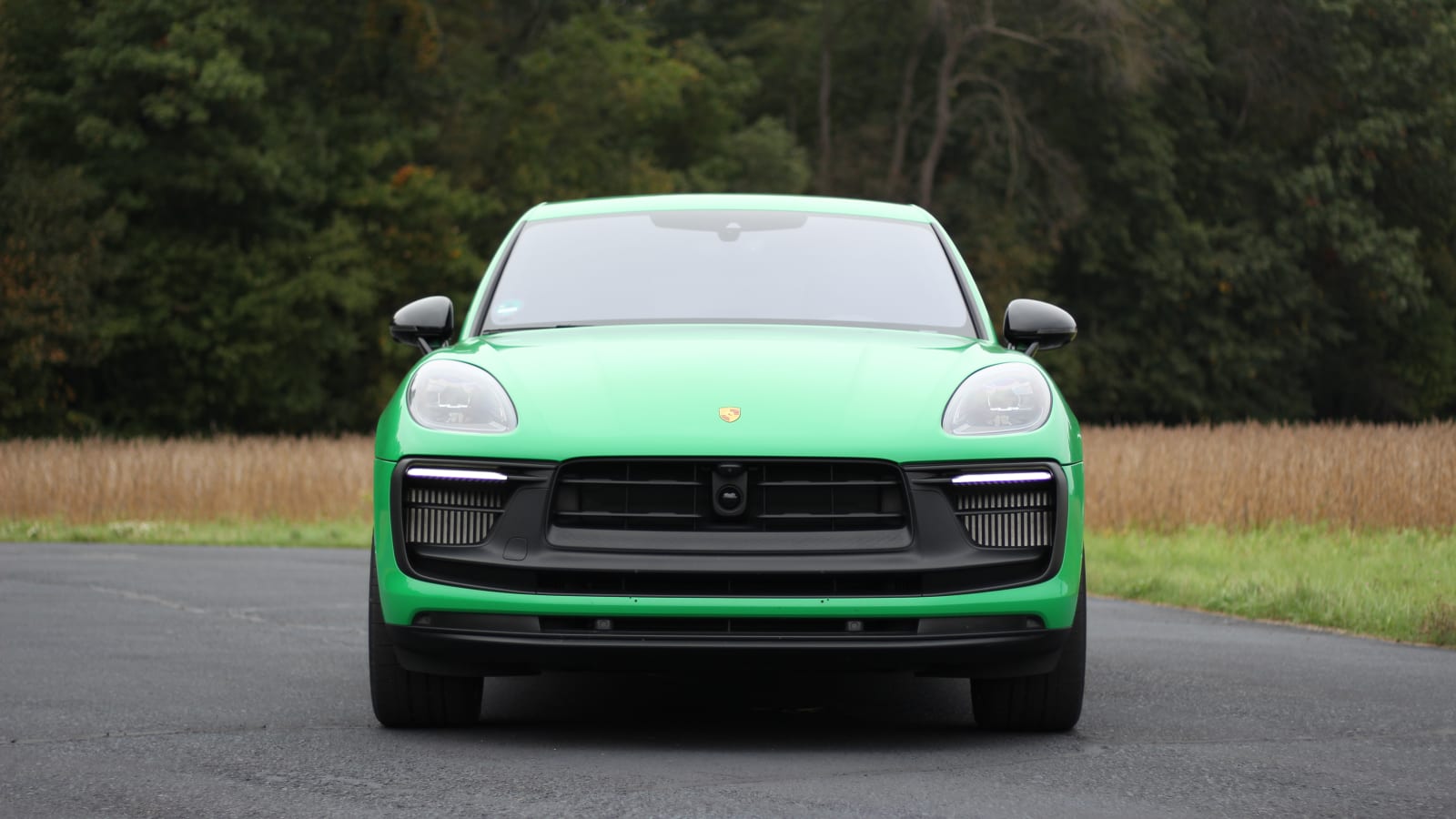 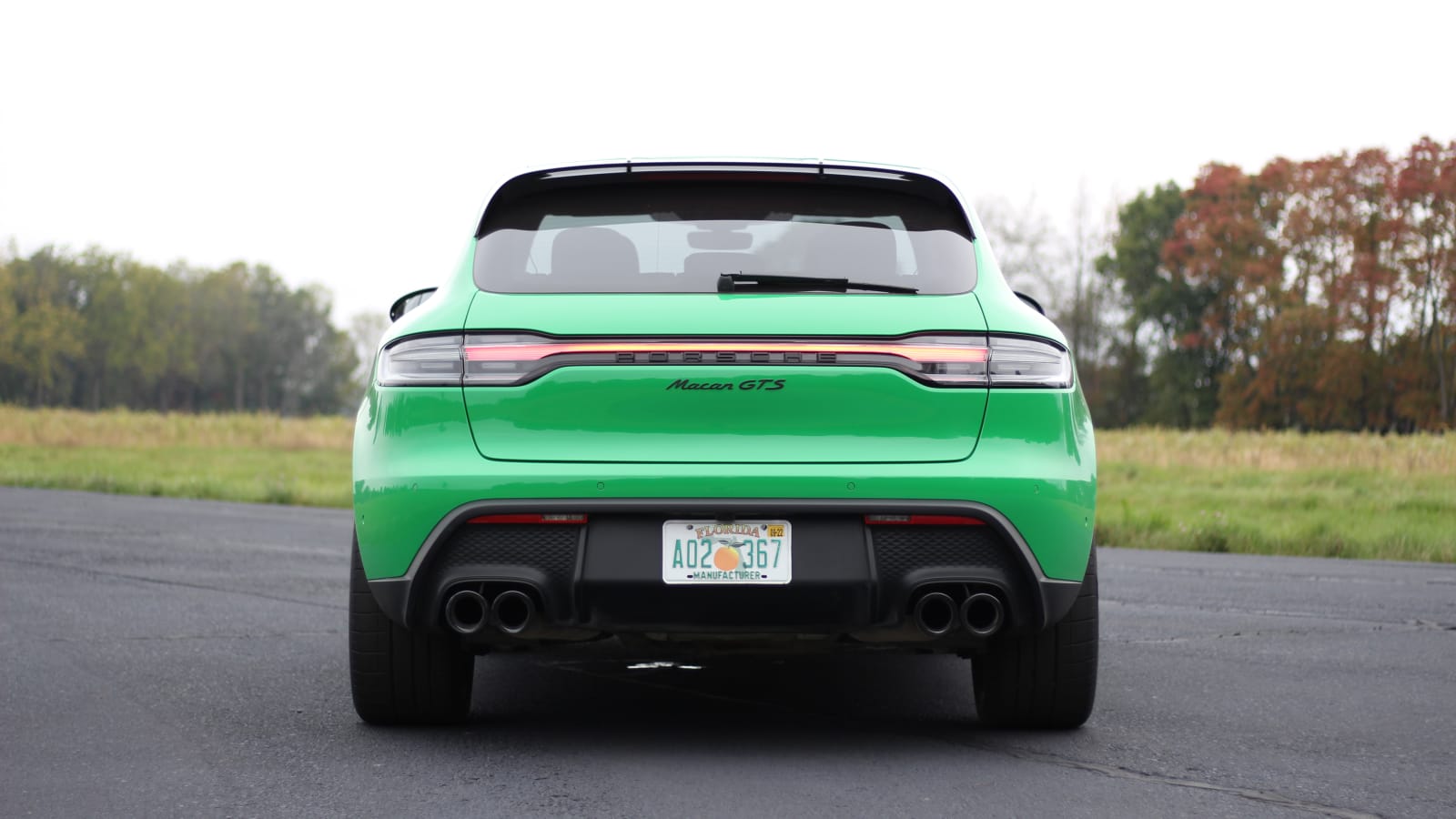 There are newer, more tech-laden and luxurious super SUVs to choose from, but Porsche continues to prove that it’s the best if what you’re looking for is sheer performance and driving excellence. You’ll pay the typical Porsche prices for that superiority, as our tester came out to $104,410 after options. The GTS is $81,250 before options — which is actually $4,700 less than the 2021 Turbo model — but don’t think you’ll get out the door at that base price.

If peak Macan is what you’re after, this is now your answer. We aren’t privy to all of Porsche’s plans, but with the electric Macan just around the corner, it’s hard to imagine this gasoline crossover getting much better than it is today. And that’s totally fine, because the 2022 Macan GTS is and will continue to be a superlative vehicle for years to come.