BMW i3 eDrive35L headed to the Chinese market next year

BMW submitted images to the Chinese Ministry for Information and Industry Technology (MIIT) for certification of a new electric sedan called the i3 eDrive35L, the images finding their way into the MIIT’s public database and Auto Express. It’s been known for a while that BMW has an electric sedan planned for the Chinese market, expected to hit the market in next year or in 2023; camo-clad versions have been spotted in China and Europe. It wasn’t clear that the sedan would adopt the i3 name. With the i3 hatch that we know having left our market, and said to go out of production next year globally, it’s possible the electric 3 Series sedan will wear that name around the world.

That’s down the road, though. This i3 will only be for China, based on the long-wheelbase sedan that is only sold in that country. The changes are minimal, identifiers being the blanked-out kidney grille between restyled headlights, a reshaped front bumper with narrow intakes, deeper side skirts, a rear bumper with no exhaust outlets and blue trim, and aero wheels. According to the filing, those wheels will be 18-inchers on 225/50 tires, or optional 19-inchers in 225/45 rubber. Also in the filing, BMW claimed the sedan weighs 4,473 pounds and come with air suspension as standard. Other specs call out this car’s similarity to the i4 eDrive40 electric sedan coming to the U.S. next year, namely the single electric motor with 335 horsepower juiced by an 84-kWh battery, and a top speed limited to 118 miles per hour. 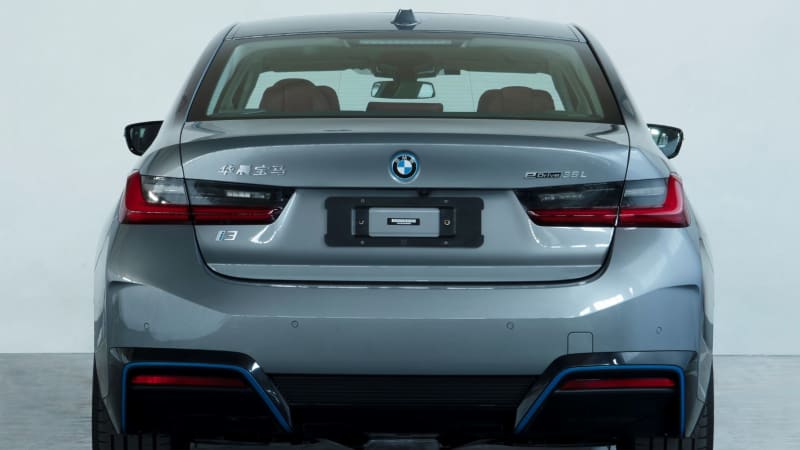 This i3 is slated to enter production at BMW’s joint-venture factory with Chinese automaker Brilliance next year, alongside the iX3 electric SUV. Since the model this sedan is based on is only sold in China, we think it’s a long shot for export to other markets. An electric 3 Series on BMW’s new Neue Klasse platform that replaces the CLAR and front-wheel-drive FAAR architectures is thought to be headed for global markets in 2025. Before then, we expect electric variants of the 5 Series and 7 Series on CLAR bones to join the i4 eDrive40 and i4 eDriveM50 here.