Rolls-Royce promised it would be developing the Spectre electric car “in plain sight,” and here’s some decent proof of that in spy shot form. Outside of the initial teaser photos released by Rolls-Royce earlier this year, we haven’t seen any other details of the electric Rolls. That’s changed today, as one of our spy shooters captured a test Spectre both on the pavement and on a flatbed.

The most intriguing angle of view is directly from the front. We can just make out that this Rolls appears to be wearing a version of the upcoming stacked headlight look previously spied on soon-to-come BMW models like the next-gen 7 Series and refreshed X7. The close-up view also provides a look at the traditional Rolls-Royce grille and the lower front bumper design. Perhaps Rolls will sort out a more elegant solution by production time, but the sensor module in the center of the lower front bumper is a bit of an eyesore.

Heading to the rear, we see some taillights lit up, but it’s difficult to make out what they might look like in final production form. These could simply be test lights and not represent what the actual production lights look like, too. As for the rest of the rear, the lower bumper is quite the piece. It juts out way beyond the bodywork and in no way looks like the finished product. 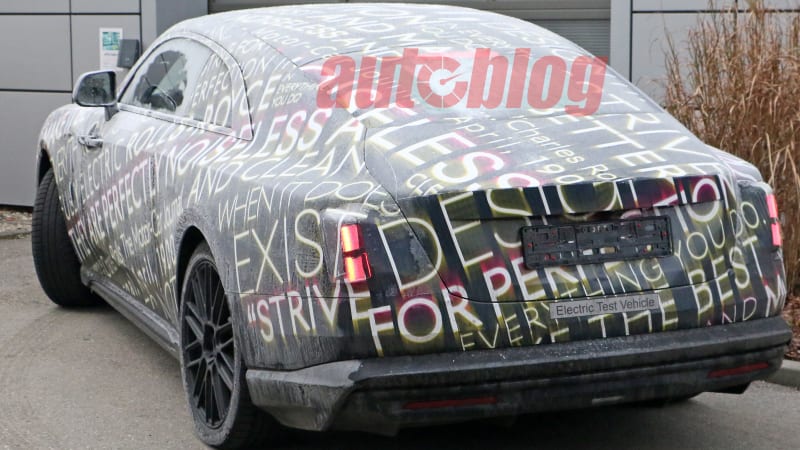 One of the last intriguing items of note is the angle of the rear tire when the driver has the steering wheel at full lock. It’s not an extreme angle of rear-wheel steer, but the rear wheel does appear to be turned in the opposite direction as the fronts. This car being a coupe, it’s reasonable that it wouldn’t need a massive amount of rear-wheel steering to be agile in a city, but it’s still a Rolls-Royce, so coupe or not, it’s massive.

Beyond those specific details, we can simply enjoy seeing the upcoming EV in clearer, closer photos than ever before. Rolls-Royce says the production car is coming in 2023, so we suspect there will be many more spy shots and small details released between now and then.