PORTLAND, ORE. – It is so easy to greet the Aston Martin DBX with a great big eye roll. Here we go again, yet another purveyor of beautiful sporting machines selling out to produce a bloated SUV that’s utterly anathema to all the cars that came before. Yet another cynical brand exercise where some classic styling cues and a desirable badge are applied to someone else’s SUV platform. And yet another SUV that’s hopelessly compromised by those same brand affectations. Worse, this is Aston Martin. If you take away the DB5-derived body style and GT driving experience, what exactly are you left with? Aren’t those the best reasons to buy one instead of a Porsche?

In other words, the arrival of a $222,000 Aston Martin wasn’t necessarily greeted by giddy clapping and the score of “Goldfinger” turned up to 11. Skepticism would be the word. Yet, immediately, it started to erode. It may be an SUV and certainly bloated compared to a Vantage, but it sure is pretty. And not just because of that trademark grille and Vantage-like ducktail. It’s all about the proportions. The pronounced body-length shoulder line and inboard fastback greenhouse may evoke Aston’s cars, but it also avoids the tall, slab-like profile of a Porsche Cayenne and most other SUVs. The wheels are pushed to the corners, elongating the body and creating the sort of long hood, short deck proportions one expects from a two-door GT and definitely not an SUV. Even without the styling cues, the thing looks like an Aston Martin.

The DBX is also not on “someone else’s SUV platform,” it was created by Aston Martin for Aston Martin. So unlike the Bentley Bentayga, Lamborghini Urus and earlier Cayennes, Aston Martin didn’t need to contend with the sort of existing, unchangeable hard points that lead to awkward proportions. This can also have practical benefits. Take that elongated wheelbase, for example, which is 2.6 inches longer than the Bentayga’s despite the entire DBX being 3.4 inches shorter. Much like the similarly from-scratch Jaguar F-Pace, I suspect Aston Martin made the DBX wheelbase so long for the aforementioned aesthetic reasons and because, unshackled by an existing platform, it could. Yet, like the F-Pace, the happy side effect to a long wheelbase is extra interior space. 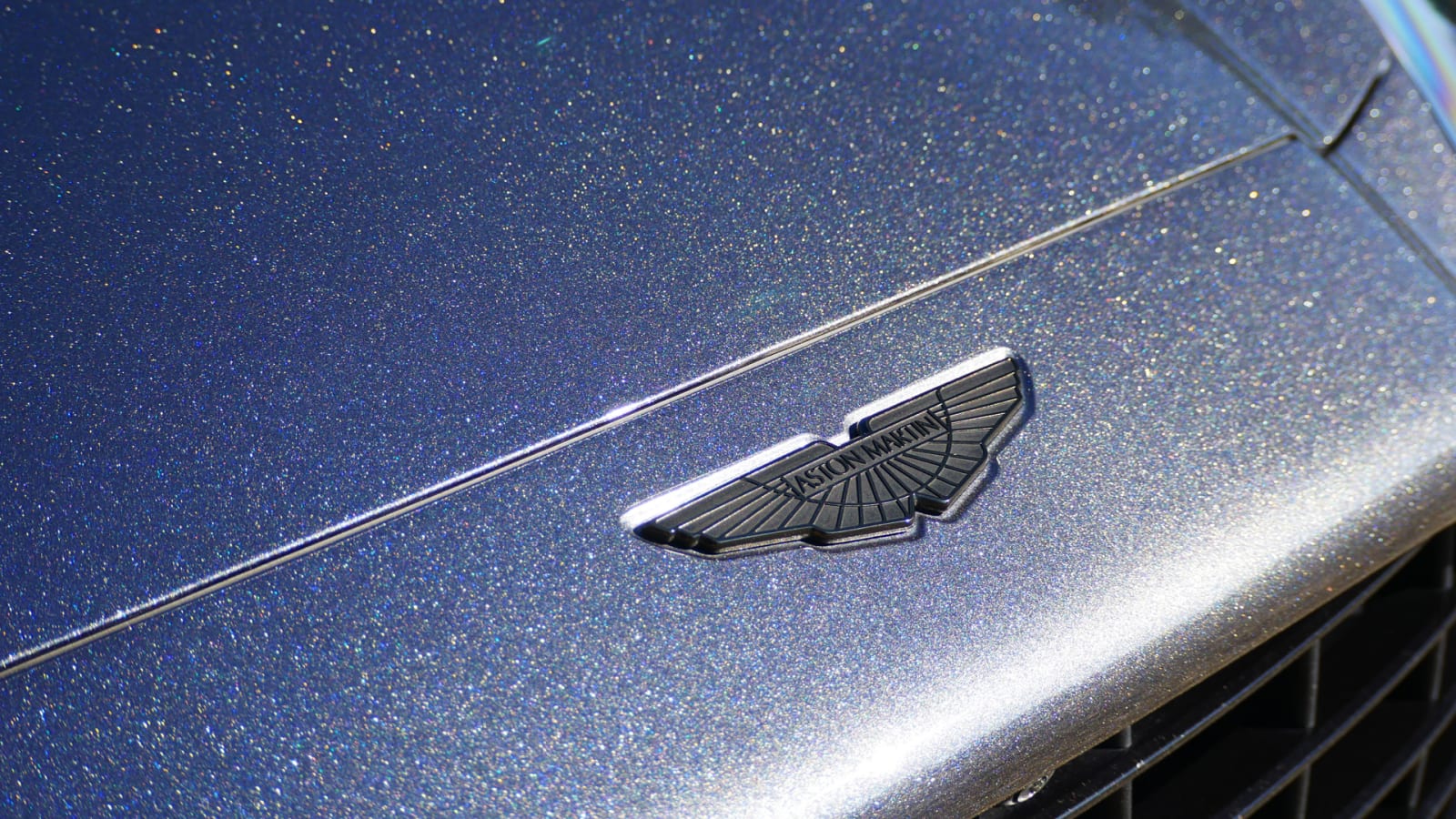 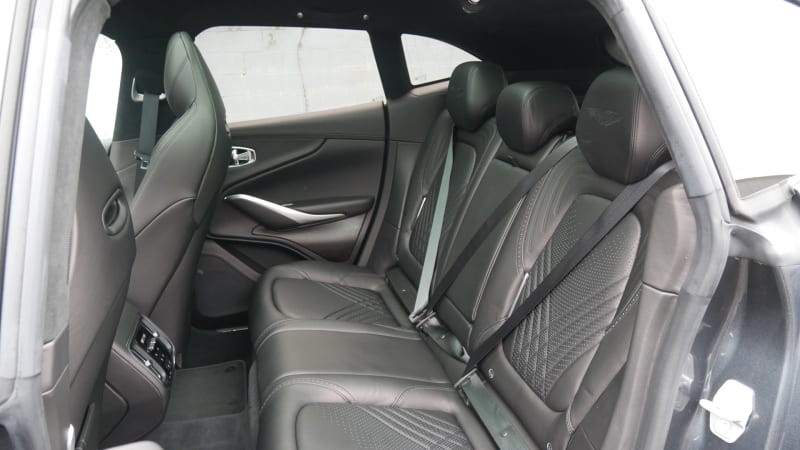 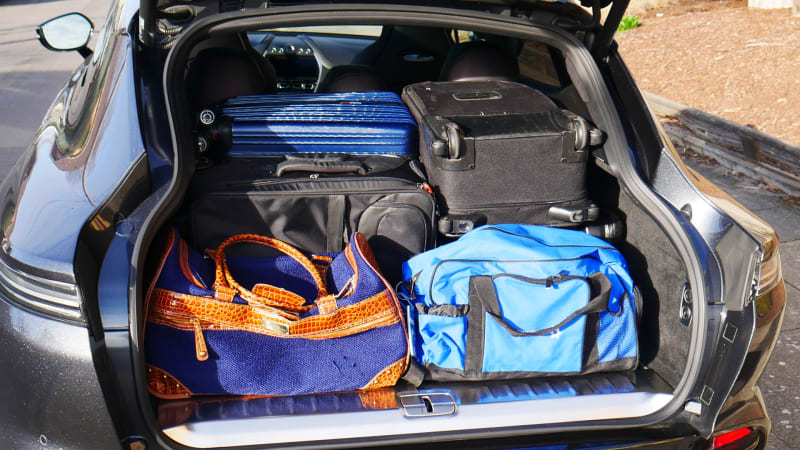 In the DBX, the amount of extra space is genuinely surprising. We fit an enormous Britax rear-facing child seat in the rear and had the front passenger seat pushed far enough back for someone 6-foot-3 to comfortably sprawl out. That’s rare for any SUV. There’s also abundant leg- and headroom for rear passengers as well. Meanwhile, that graceful tail end conceals far more cargo space than Aston’s official numbers indicate. In short, the DBX offers genuine utility and isn’t compromised by its brand or racy styling. If anything, it’s benefited by them.

So, it has the room for a grand tour, and unlike a DB11, you can bring the kid and the poodle along in this family-friendly GT. Well, can bring. For this drive, they’d be remaining behind. Google Maps was set for Astoria, Oregon, with a suitably grand scenic detour/route through the circuitous roads of the Clatsop State Forest. I’d even be driving through a town called Vesper, which seems appropriate for the official car brand of James Bond.

Under that beautifully proportioned skin is some serious engineering. Air suspension with adjustable spring rates and five-level height adjustment is standard, and is only the first cog in delivering exceptional ride quality despite riding on 22-inch wheels. The second is the 48-volt electronic anti-roll control system, which replaces traditional anti-roll bars and allows individual wheels to take advantage of their maximum suspension travel without upsetting the others. Among other benefits, this ensures that exceptional ride quality while also delivering body control in its Sport modes similar to the DB11. Add in a standard, torque-vectoring all-wheel-drive system and you have the pieces in place for a sensational performance-oriented vehicle, SUV or otherwise. 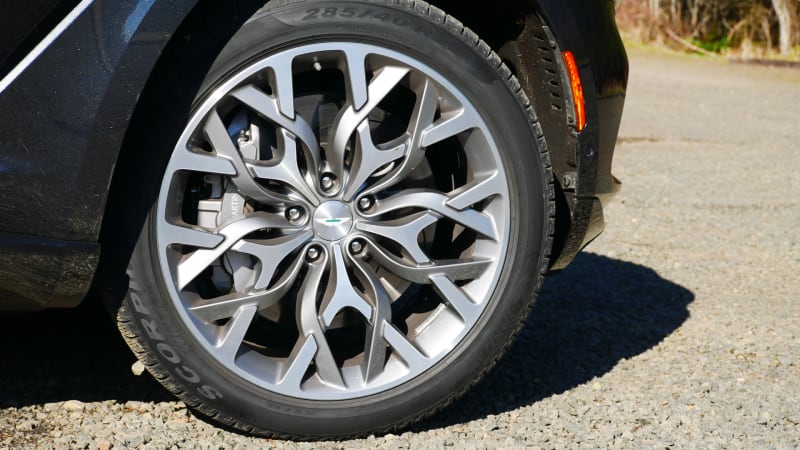 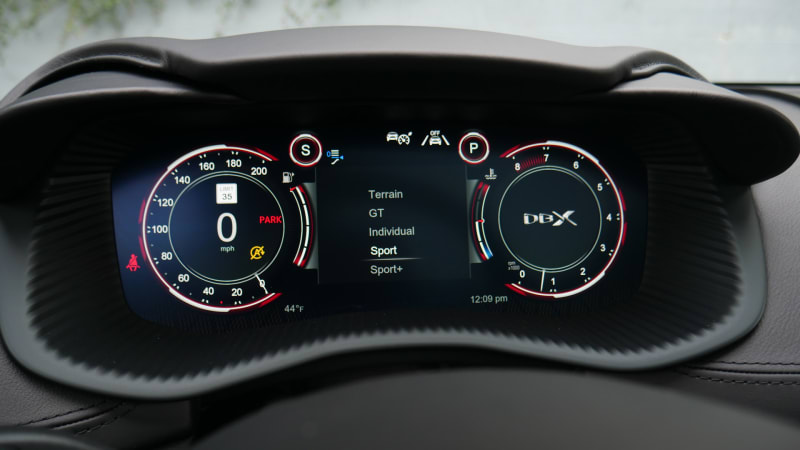 Unfortunately, this particular performance-oriented vehicle wore Pirelli Scorpion winter tires. This isn’t a complaint; we’ve had a number of cars show up wearing summer tires in February that end up getting parked for a week. With unseasonably high temperatures in the Portland area, winter tires were a sad trombone on this day.

Braking into the first real turn with enthusiasm, all four tires start to slide and plow forward with momentum. Stability control with the save. Only the lightest spackle of moisture proves to be enough to make the hard winters behave as such. Drier pavement yields less clenching results, but there’s never a chance to really push hard enough to let the anti-roll system, adaptive suspension and torque-vectoring really showcase their magic.

Which makes it even more remarkable that the DBX was so enjoyable to drive. No matter the pace, the steering is the best I’ve experienced in recent years outside of a few Porsches. You can feel the nuances of the pavement; the subtle dips, ripples and bumps detected by delicate tugs. Although effort increases slightly in the Sport modes, the quick steering always feels like you’re moving the wheel precisely and consistently through warm butter.

Ultimately, the DBX drives like a cohesively sporting vehicle, not just some go-fast componentry, stiff steering and suspension, and a loud silly engine applied to some otherwise ho-hum SUV. 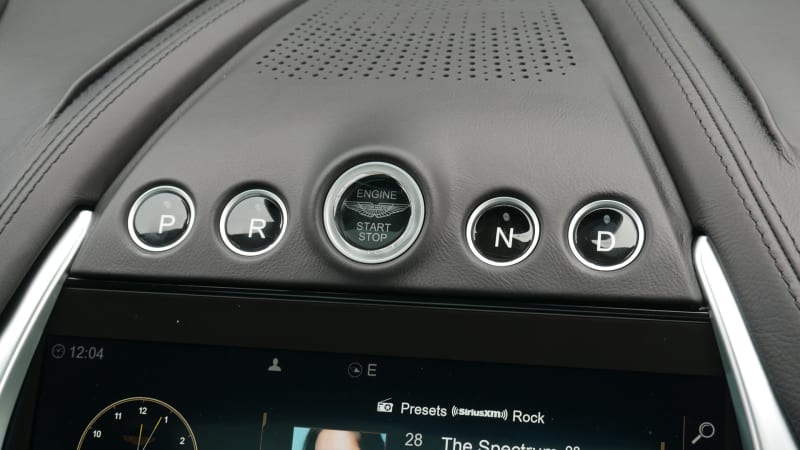 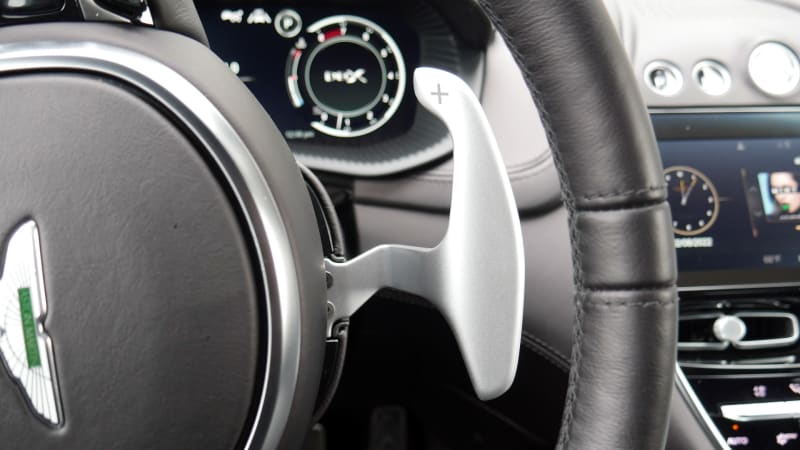 Indeed, the engine is neither loud, nor silly. Sourced from Mercedes-AMG, the 4.0-liter twin-turbo V8 produces 542 horsepower and 516 pound-feet of torque. That’s up from considerably from the DB11 and Vantage thanks to upgraded turbos, a different compression ratio and updated charge coolers. Aston Martin also changed the engine’s firing order to provide an audible character distinct from its use in AMGs. Perhaps this is why there’s an odd, slightly gravelly tone at times at throttle tip in. As revs rise, it’s not terribly characterful, but that’s to be expected of a turbo V8. It delivers smooth, effortless power throughout its range and is clocked at 4.3 seconds from 0-60.

It’s paired with an optional sport exhaust that barks enthusiastically at startup (or not at all if you select “quiet” mode to appease the neighbors — or more easily steal dad’s DBX). It belts out a nice warbling wail when given the beans, but thankfully keeps the pops and crackles to a respectable volume in the Sport and Sport+ modes. This is an Aston Martin and therefore has the license to put on a show, but it’s still grown up and classy about it.

A traditional nine-speed automatic transmission is standard, and its torque converter ensures refined, creamy smooth shifts in regular driving. Downshifts are readily engaged as needed with a throttle prod, but it would be nice if they were summoned with similar haste when braking into a corner. They do just that in Sport+, calling up a lower cog just as you would if using the gorgeous, real-metal paddle shifters, but that drive mode also turns off the traction control. Recall the earlier bit about the slip-slidey winter tires. Thankfully, there’s an Individual mode that lets you only set the transmission and throttle to Sport+. The steering and suspension only offer GT/normal and Sport modes, plus two Terrain/off-road settings. 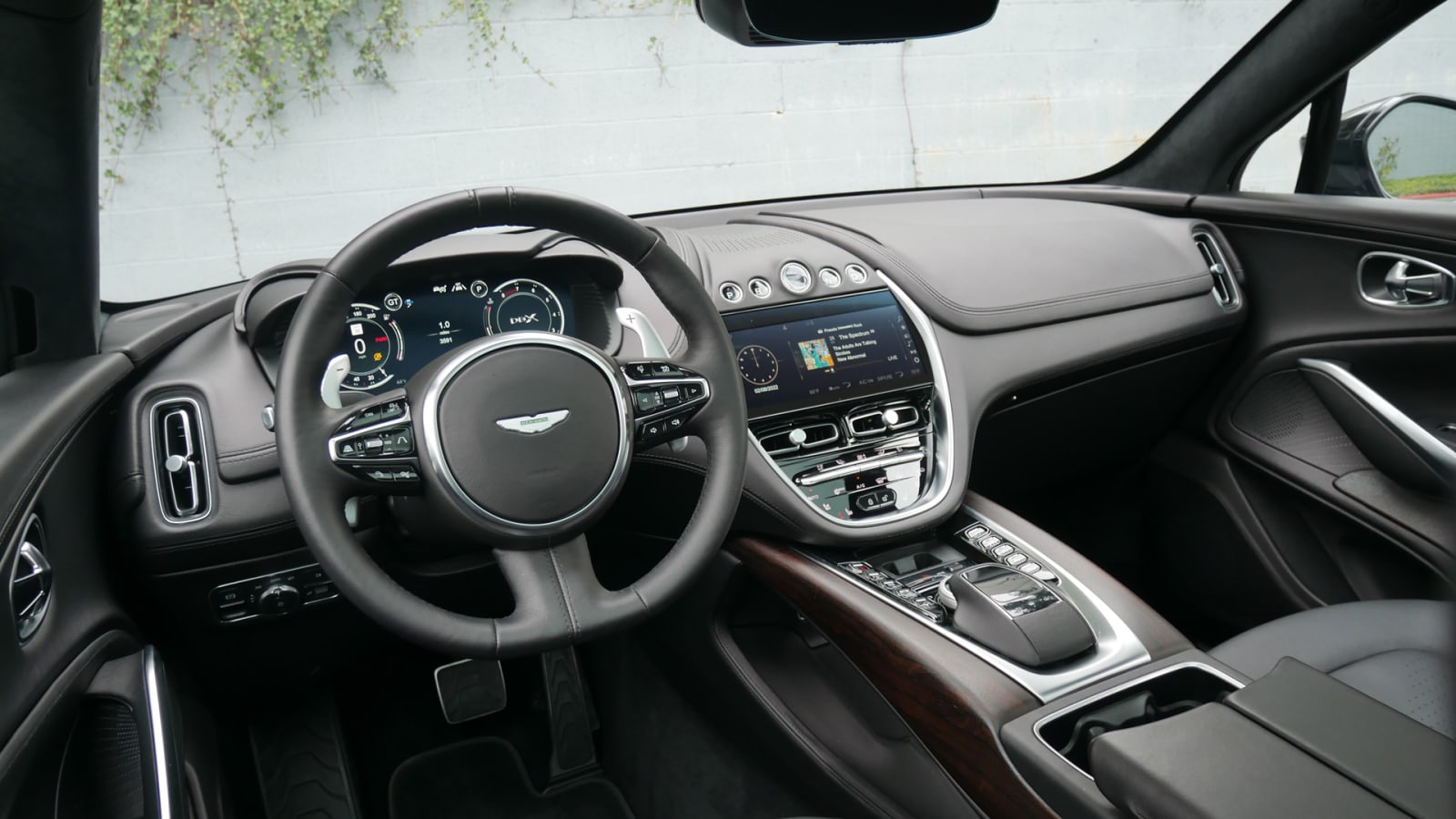 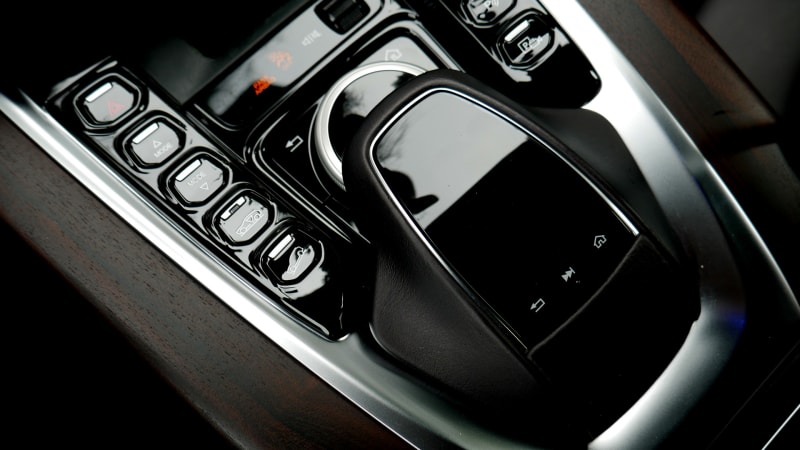 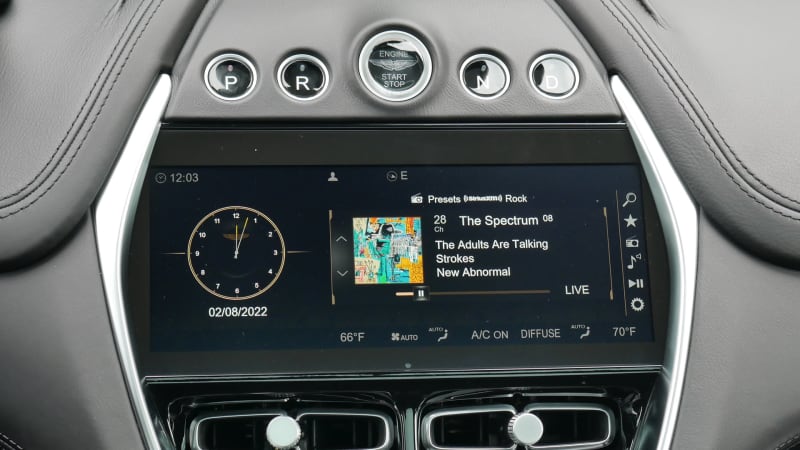 The engine isn’t the only thing by Mercedes-Benz. The stalks, headlight controls, power liftgate buttons and optional infotainment touchpad are among the interior bits and pieces sourced from Germany. There are enough Aston-exclusive controls to avoid looking like a GLE, though, and really, if you’re going to sample from someone else’s parts bin, Mercedes is a good one. Sure beats the Crown Vic steering wheel in a ’90s Virage or Miata door handles in the DB7. The infotainment interface itself is also derived from the final-generation Mercedes COMAND system, which means you don’t get touchscreen functionality. That makes using Apple CarPlay frustrating, but for everything else, the Aston version is a bit simpler and more logically arranged.

Ultimately, the important thing is that the ambience created by the buttery smooth leather and rich open pore veneer isn’t sullied by chintzy plastic bits as it was in prior Aston Martin generations. Maybe it’s not a Bentley, but this is a properly sumptuous and cohesive high-end luxury interior. It looks, feels and smells of a richer ilk than a Porsche … or most Mercedes, even. Sounds sensational, too, as the DBX has one of the best audio systems we’ve ever sampled despite being unbranded.

Its exterior build quality was also outstanding, with tight panel gaps, examples of sophisticated stamping throughout and the spectacularly metallic Xenon Grey paint. Now, does it all add up to a vehicle worthy of a base price of $185,900 for 2022 with an as-tested tally of over $222,000? Oh, probably not, as it starts $50,000 north of a comparable Porsche Cayenne Turbo Coupe. That’s sensational in its own right, but when we’re talking prices like this, the Aston’s beauty, its blend of comfort and driver engagement, its interior luxury, its greater customization and, most surprising of all, superior utility wouldn’t make forking over 50 extra grand a ridiculous proposition. It would sure make more sense than paying even more for the vulgar Lamborghini Urus or ghastly Bentley Bentayga.

If price is no object, this is one of the best new cars. Period. It’s just so shockingly well-rounded. It can be your sensible family hauler; it can be your beautiful weekend grand tourer. The DBX is basically like getting two expensive exceptional cars for the price of two expensive exceptional cars. Maybe that doesn’t equate to good value, but there’s no reason to greet it with anything other than giddy clapping.