2022 Audi Q5 Review | Middle of the pack with many versions

The 2022 Audi Q5 soldiers on in its second model year after a mid-cycle refresh, which included the addition of the Sportback versions of the Q5 and SQ5. As we predicted last year, the Q5 has remained the brand’s top-selling vehicle. Q5 sales actually increased 20% last year, as customers continue to favor the SUV format, with this particular nameplate hitting a sweet spot as the brand’s compact crossover, with a nice combination of luxury, drivability and roominess. We particularly like the Q5 55 TSFI e plug-in-hybrid, with its impressive acceleration, good fuel economy and available $7,500 federal EV tax credit.

By nature of its positioning, the Q5 faces stiff competition among its segment. Compered to its rivals, the Audi finds itself lacking in interior quality and space. Still it’s not a bad choice, thanks to its comfort, sporty styling and driving dynamics that feel at home both in urban traffic, winding rural roads and the open highway. Still, you ought to take a look at competitors including the Volvo XC60, BMW X3, Porsche Macan or Genesis GV70. You might still land on the Audi, but there’s a great, wild world of compelling luxury compact SUVs out there.

While big changes came to the lineup for the 2021 model year — like the addition of the Sportback body style — the 2022 Q5 sees mostly minor updates. The biggest news is the arrival of a new base model. As of this writing, Audi has not officially launched its new Q5 40 TFSI, but Audi has told Autoblog its introduction is “imminent.”

In changes to current offerings, the 45 TFSI gets the S Line exterior as standard. The 45 TFSI (including the Sportback) and 55 TFSI e plug-in hybrid get an optional Black Optic package. There’s also a new 18-inch wheel option for the Premium trim, and a standard power-adjustable steering column for Premium Plus. The SQ5 and SQ5 Sportback get standard carbon fiber inlays. The 55 PHEV gets standard sport seats and, most importantly, a 3.8-kilowatt-hour increase in battery capacity, for a total of 17.9 kWh. That boosts its electric range from 19 to 23 miles, and makes it eligible for the full $7,500 federal tax credit (as opposed to $6,712 for the 2021 model). 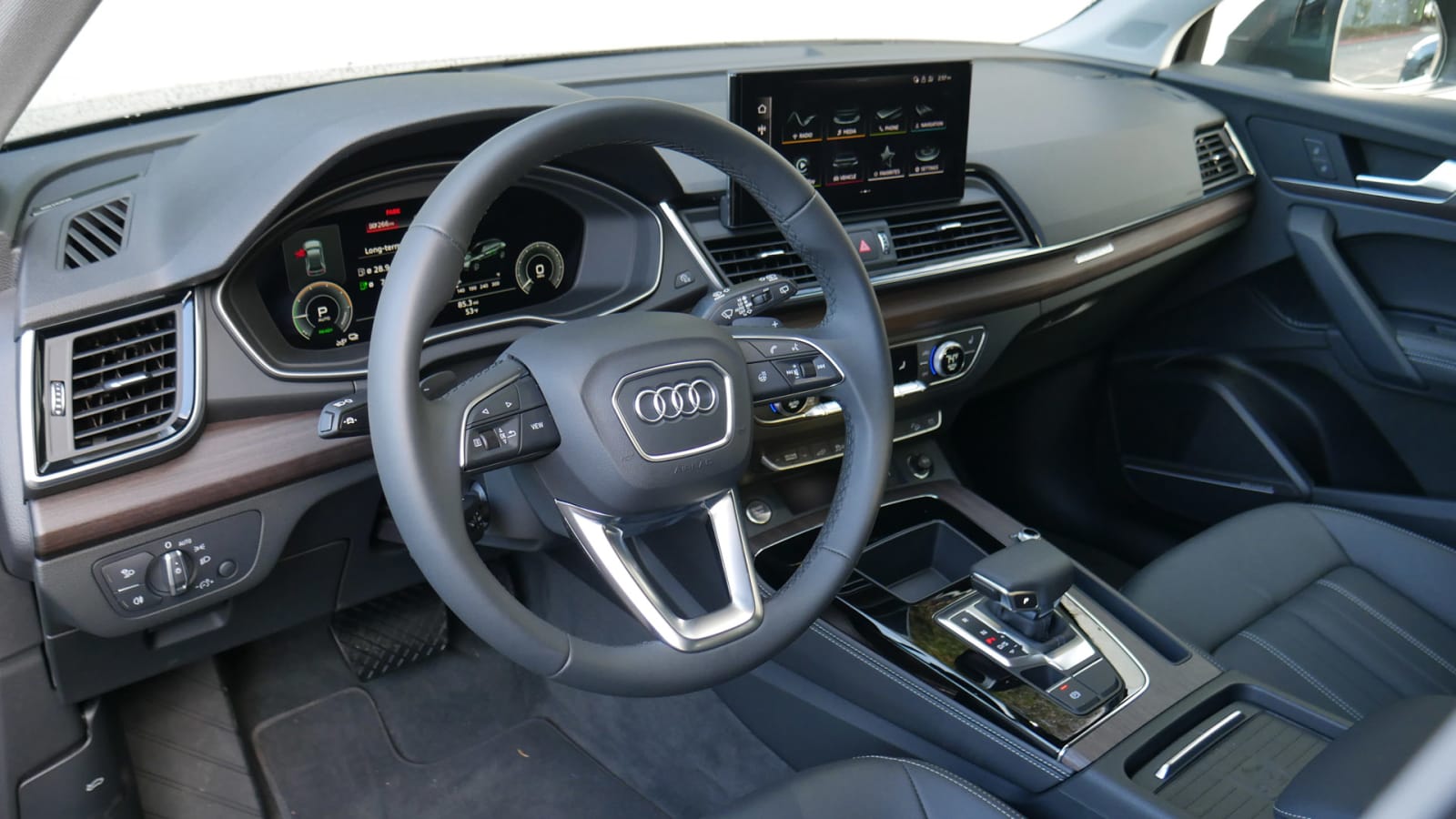 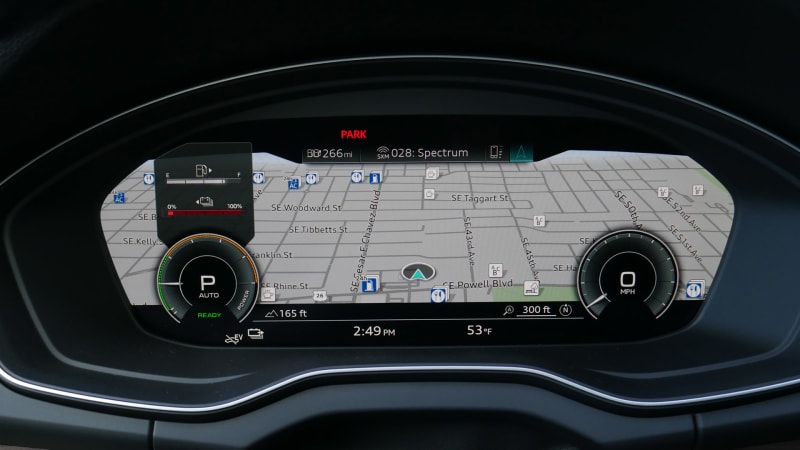 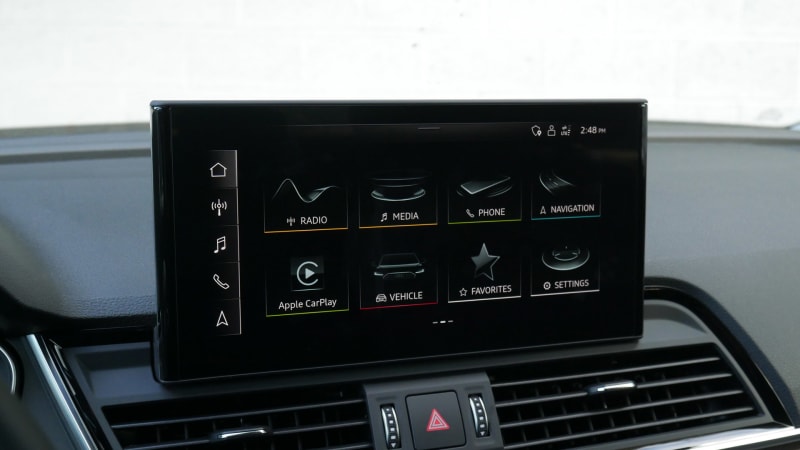 What are the Q5’s interior and in-car technology like?

The Q5 and Q5 Sportback’s interior is tasteful, with a design that doesn’t distract or repel. The leather sport seats are firm but comfortable, providing good support underneath your legs. Materials appear high quality, but look closer, and many of the plastics lower down in the cabin are disappointingly cheap. Its functionality is also disappointing – the center console is peppered with small bins of questionable value. One must also choose between using the cupholders and keeping items in the under-armrest bin due to a sliding cover that doubles as a wireless charger. At least the cupholder can be optionally cooled and heated, a great feature that allows allowing you to quench your thirst with a cold gulp of water or jolt of hot coffee over longer drives.

We have mixed feelings about the Q5’s latest MMI tech interface, too. While we like the functionality of the touchscreen, we miss having redundant infotainment controls on the center console. On the other hand, we always welcome the inclusion of physical controls for climate settings, something pricier Audis have gone away from in favor of touchscreen controls that don’t do the job as well. 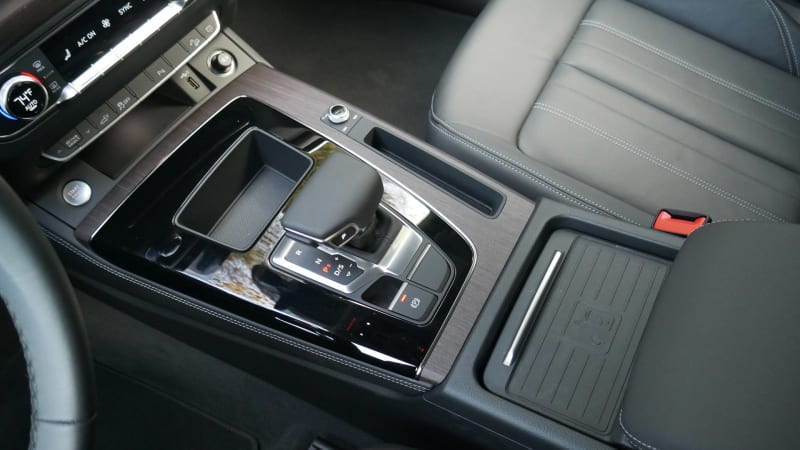 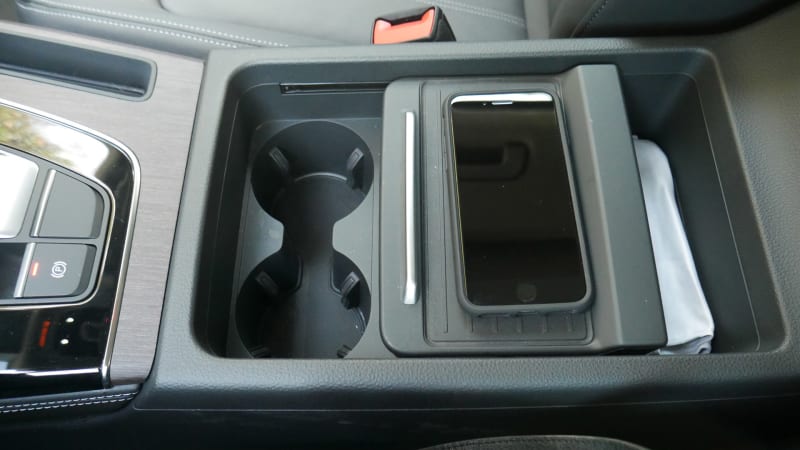 The Q5 is one of the smallest compact luxury crossovers, especially in terms of cargo capacity. Its 25.9 cubic feet of space behind its back seat is near the bottom of the segment and seemed even smaller than that in our testing — it fell short of the also-small Mercedes-Benz GLC in our luggage test. Now, the Q5 does provide greater flexibility than most due to its sliding back seat, which increases cargo capacity. That’s definitely a good thing, but you also reduce passenger space in the process. That’s not ideal since the back seat doesn’t have much space to lose – in our back-to-back test drives of the Q5 and its key competitors, we found that it had the least spacious back seat. Maximum cargo volume is listed at 54 cubic feet with the rear seats folded.

Of course, the Sportback models shrink that cargo capacity (below right), but perhaps not as much as you’d think. It ranges from 24.7 to 51.9 cubic feet, depending on whether or not you fold the rear seats, which represents a smaller sacrifice to style than the other crossover coupes make.

When it comes to exterior dimensions, the Q5 is comparable to most competitors. Its curb weight is also mid-pack and its ground clearance comparably generous. That said, it feels much smaller when behind the wheel, but we’ll touch on that more below. 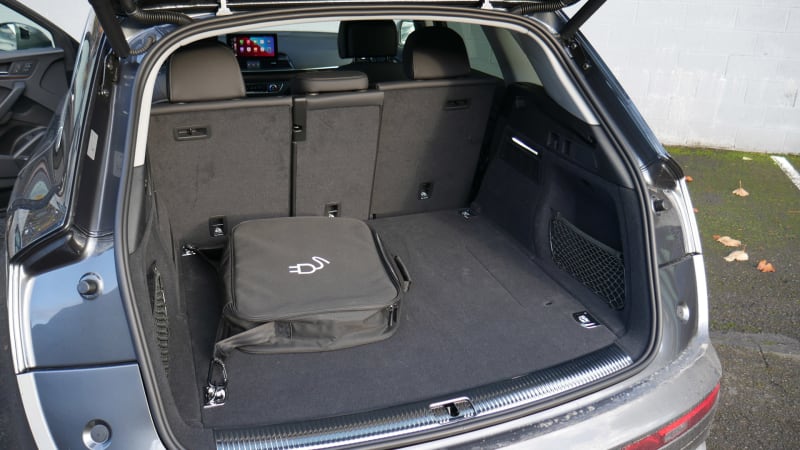 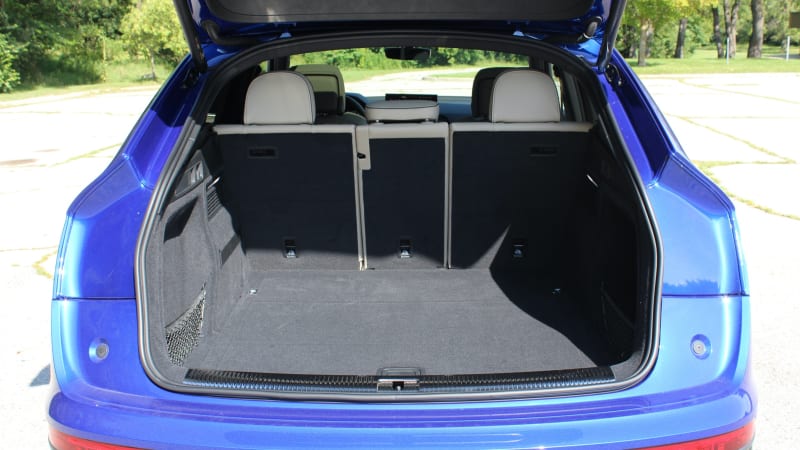 What are the Q5’s fuel economy and performance specs?

The Q5 45 TFSI Quattro has a 2.0-liter turbocharged inline-four bolstered by a mild-hybrid system that powers to vehicle systems and effectively smooths out the automatic stop/start system rather than enhancing acceleration. A seven-speed dual-clutch automated manual is standard. Output is a competitive 261 horsepower and 273 pound-feet of torque, with a 0-60-mph estimate of an also-competitive 5.7 seconds. EPA-estimated fuel economy is 23 mpg city, 28 mpg highway and 25 mpg combined. “Quattro with Ultra” all-wheel drive is standard, indicating Audi’s system that primarily drives the front wheels under cruising conditions to save fuel but sends it rearward as needed in various scenarios.

The plug-in hybrid, or officially the “Q5 55 TFSI e quattro,” adds an electric motor and 17.9-kWh battery to a version of the 2.0-liter turbo engine. Total output is 362 hp and 369 lb-ft of torque, with the 0-60 time falling to 5.0 seconds. The EPA says it will go 23 miles on a charge, which is slightly better than the 2021 model, and useful enough to limit gasoline use for many commutes.

On the other end of the spectrum is the SQ5 (and SQ5 Sportback) performance model, powered by a 3.0-liter turbo V6 good for 349 hp and 369 lb-ft of torque. It has a traditional eight-speed automatic (and a great one at that) and a sport-tuned version of Quattro (without Ultra) that also transfers torque between the axles but defaults to a rear bias. Its 4.7-second 0-60 time brings it well within reach of the BMW X3 M40i in terms of straight-line performance, and evens it with the Mercedes AMG GLC 43. Both the SQ5 and SQ5 Sportback return 19/24/21 mpg.

Audi also plans to launch a new entry level powertrain for the Q5. As of this writing, the Q5 40 TFSI hasn’t been released yet, but Audi told Autoblog that its release is “imminent.” The 40 uses a version of the turbocharged 2.0-liter four-cylinder engine producing 201 horsepower and 236 pound-feet of torque, routed to all four wheels via Audi’s S-Tronic seven-speed dual-clutch automatic transmission. 0-60 mph stretches to a still-respectable 6.8 seconds. Despite the significant power drop, fuel economy is virtually the same as the 45 TFSI with estimates of 23/29/25 mpg. 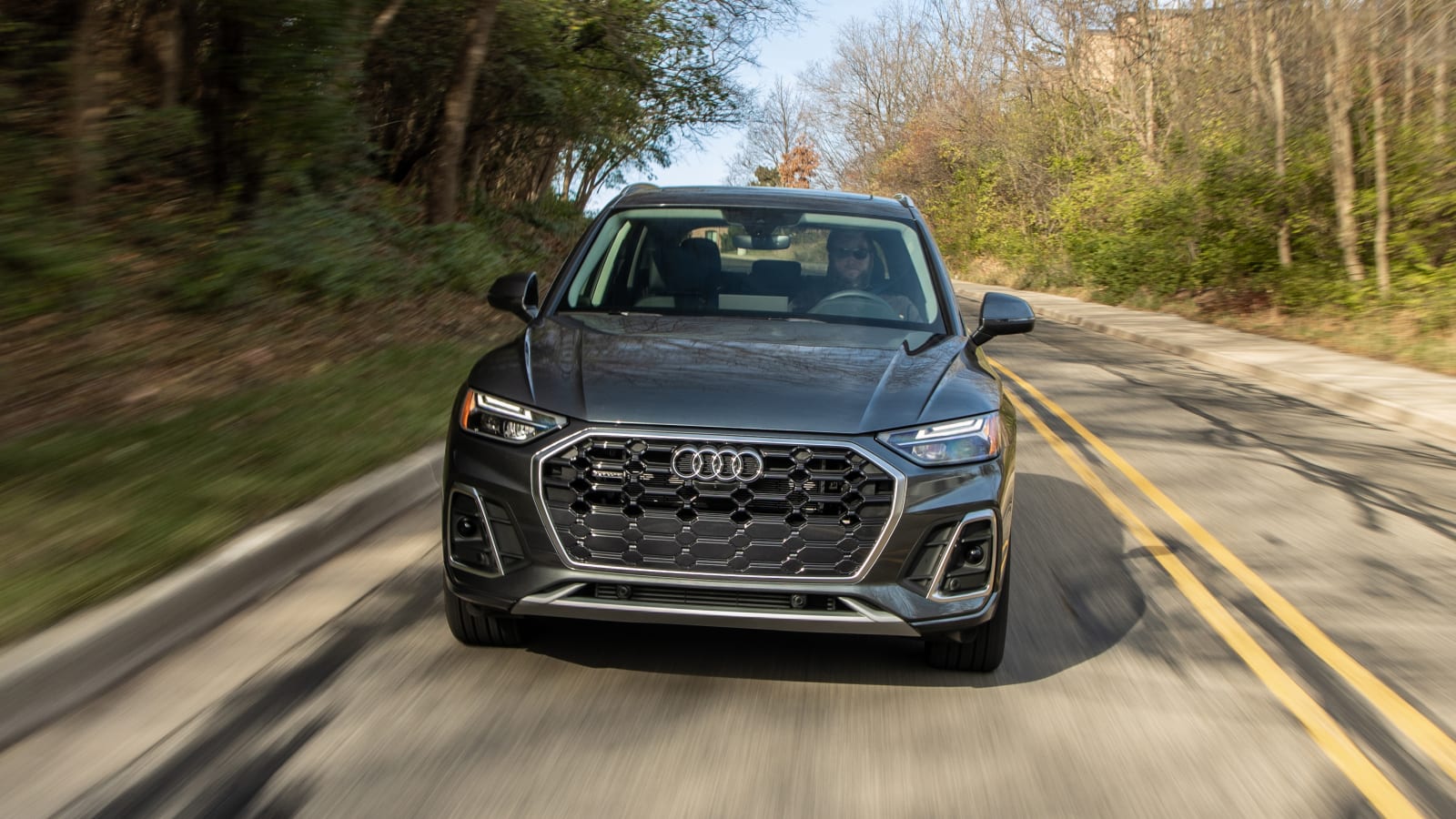 The Q5 feels smaller behind the wheel than most rivals, transitioning through successive corners with poise thanks to a well-sorted chassis and intelligent Quattro all-wheel drive. The ride is buttoned down and sophisticated, striking a terrific ride/handling balance without fancy adaptive dampers. The steering is rather numb, though, and the Dynamic effort setting is more like the one-size-fits-all setup of previous-generation Audis. Thankfully, an Individual mode allows for the heftier steering without the caffeinated Dynamic powertrain settings.

The available 2.0-liter turbo engines most buyers will end up with are strong engines backed up by one of the more intelligent, well-executed all-wheel-drive systems around. The seven-speed dual-clutch automated manual isn’t quite as smooth as a traditional automatic, but it also seems likely that many won’t notice.

We’d highly recommend considering the 55 TFSI e plug-in hybrid, which is far more powerful and efficient, and given federal and state tax credits, could easily end up being cheaper (or at least barely more expensive). The electric motor also smooths out the four-cylinder’s edges in sound and feel, resulting in a level of refinement reminiscent of a V6. When driving with a full battery, the Q5 largely behaves like a full electric car with smooth, silent and torque-rich acceleration. 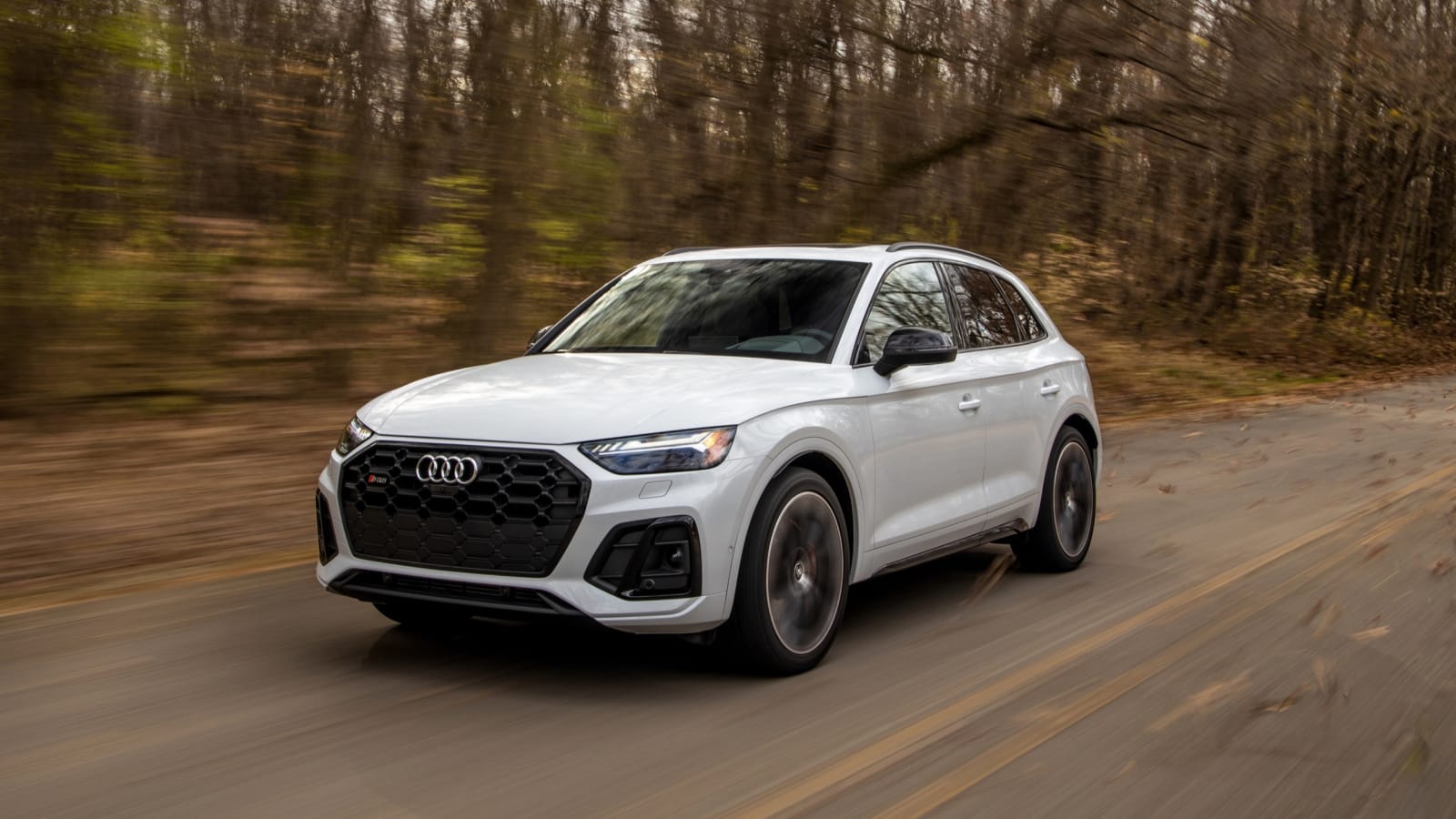 For those interested in the higher-octane Audi SQ5, we would suggest checking out our full first drive review. It’s an entertaining, sporty crossover with excellent handling, especially if you go all in on the S Sport Package — which upgrades to an adaptive air suspension and sport rear differential — and Dynamic Steering. The result is slightly more speed than the plug-in, with more car-like handling and pointier steering. We’re not sure that’s enough given the plug-in’s benefits.

The Sportback versions of the Q5 and SQ5 drive almost identically to their full-bodied counterparts, though the Q5 Sportback, sadly, is not offered with the plug-in powertrain. And even though the Sportback’s suspension setup is sportier than the standard Q5’s, the extra firmness doesn’t significantly reduce comfort. We like that the Sportback offers this by default, as it helps back up the vehicle’s more aggressive looks with tangible, if subtly so, on-road dynamic improvement.

What other Audi Q5 reviews can I read?

We dig deeper into the changes for ’21 and provide a more in-depth review of the interior and driving experience. 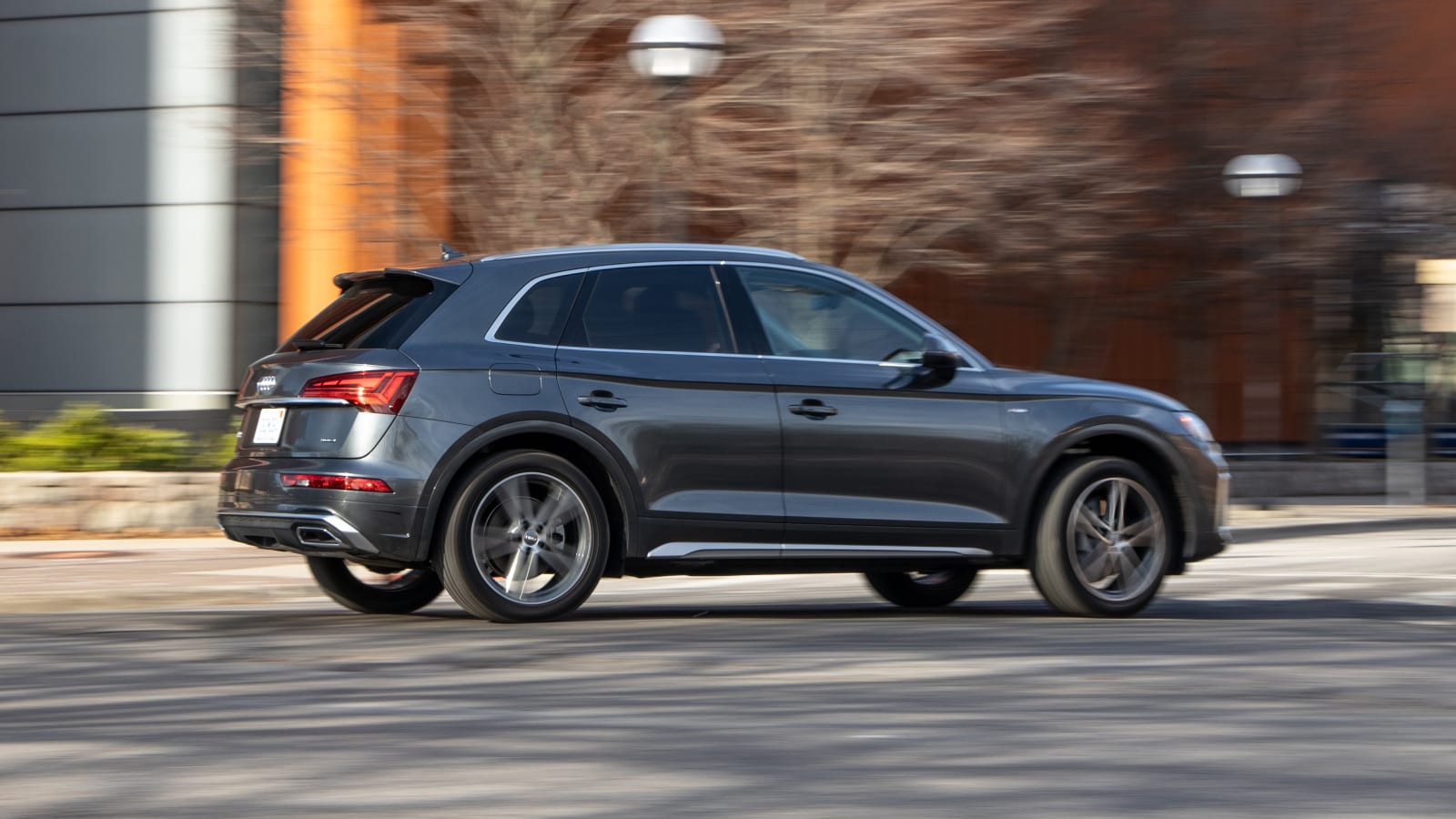 We take our first spin in the Sportback versions of the Q5 and Sq5, and find a familiar driving experience, with crossover coupe styling and a few other, more subtle differences. 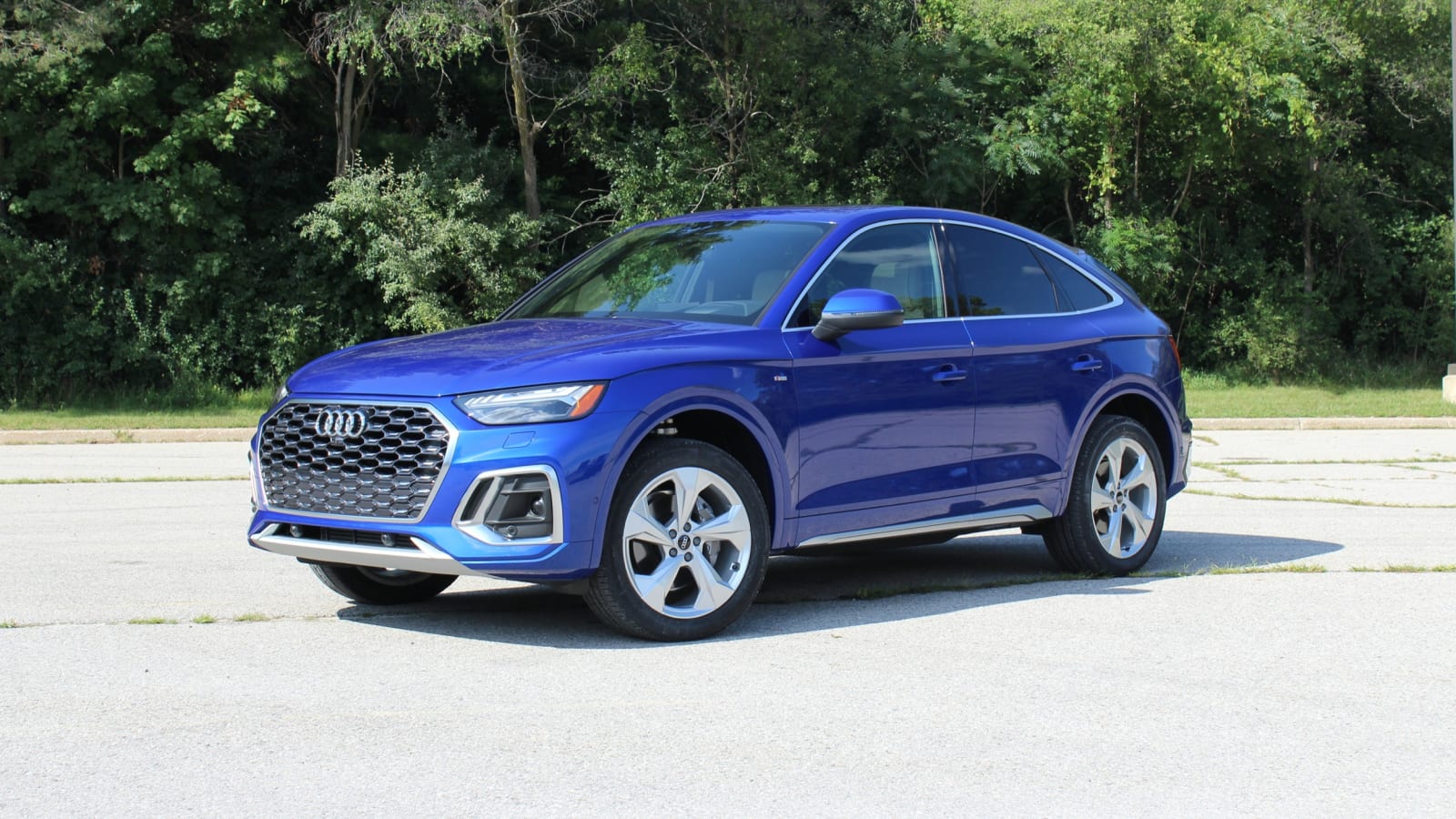 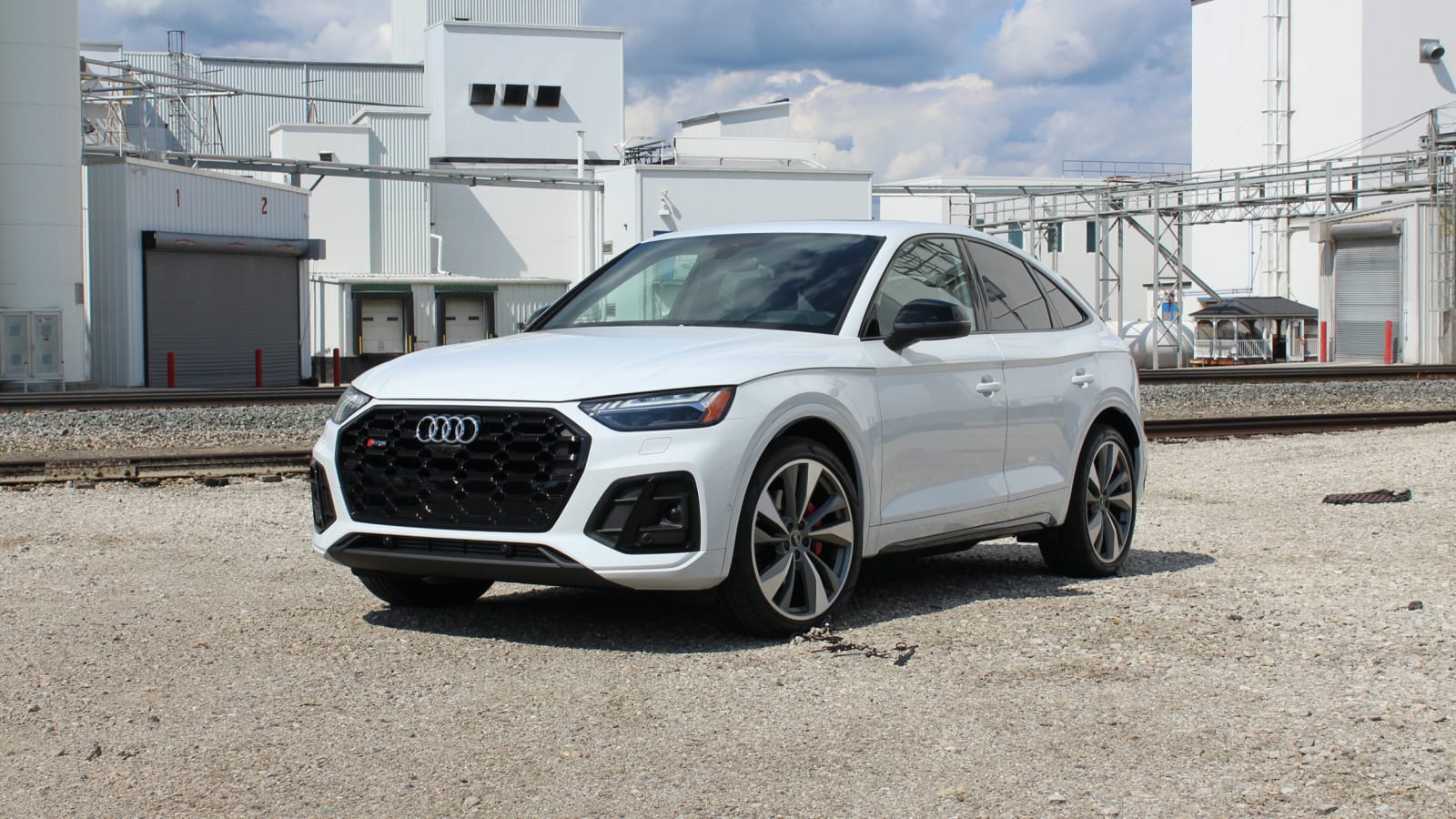 We look at how much the Q5 can fit behind its raised back seat … including with that seat slid forward to add more space. 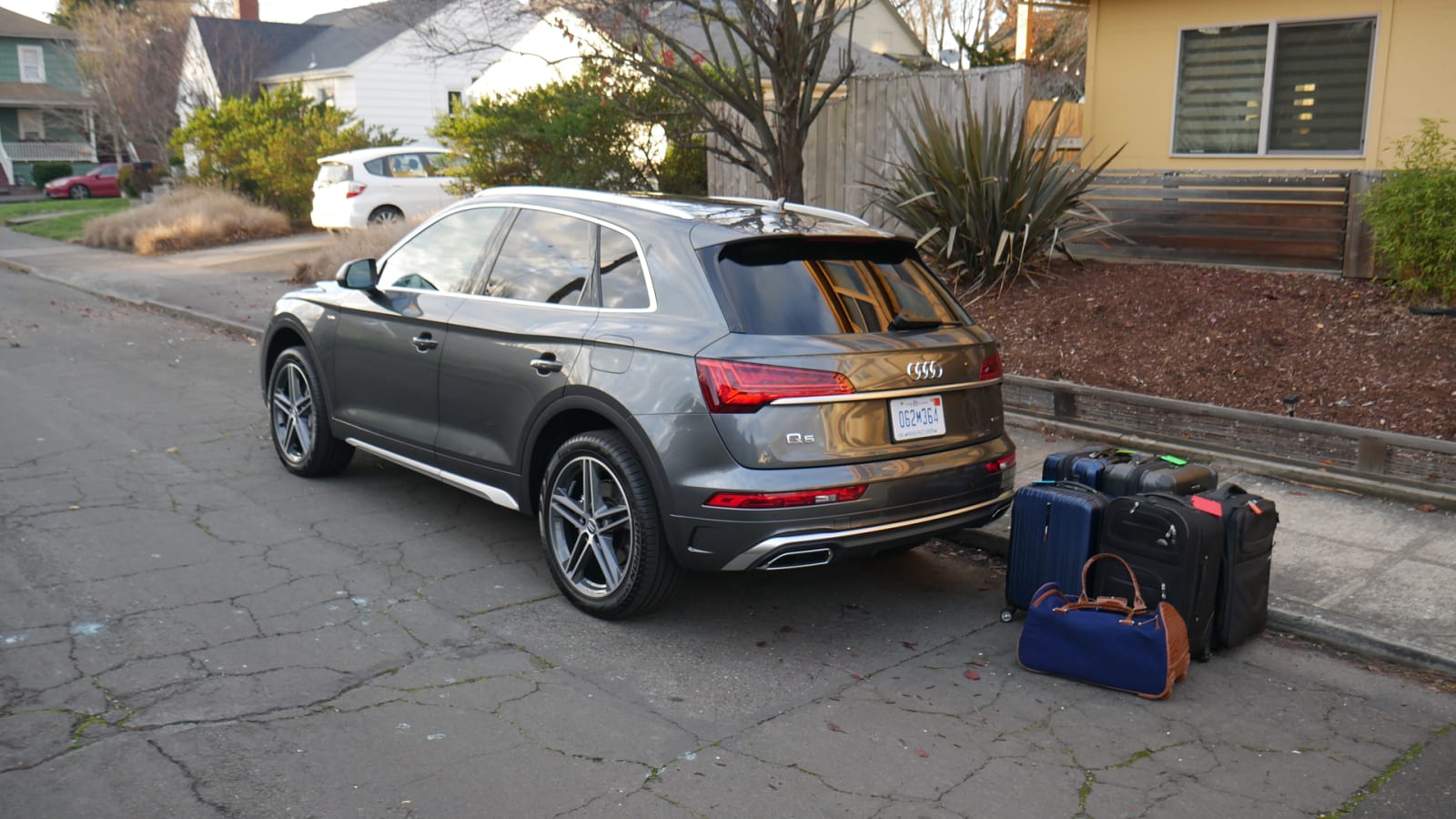 Our review of the high-performance SQ5, which is broadly unchanged mechanically for the 2022 version. 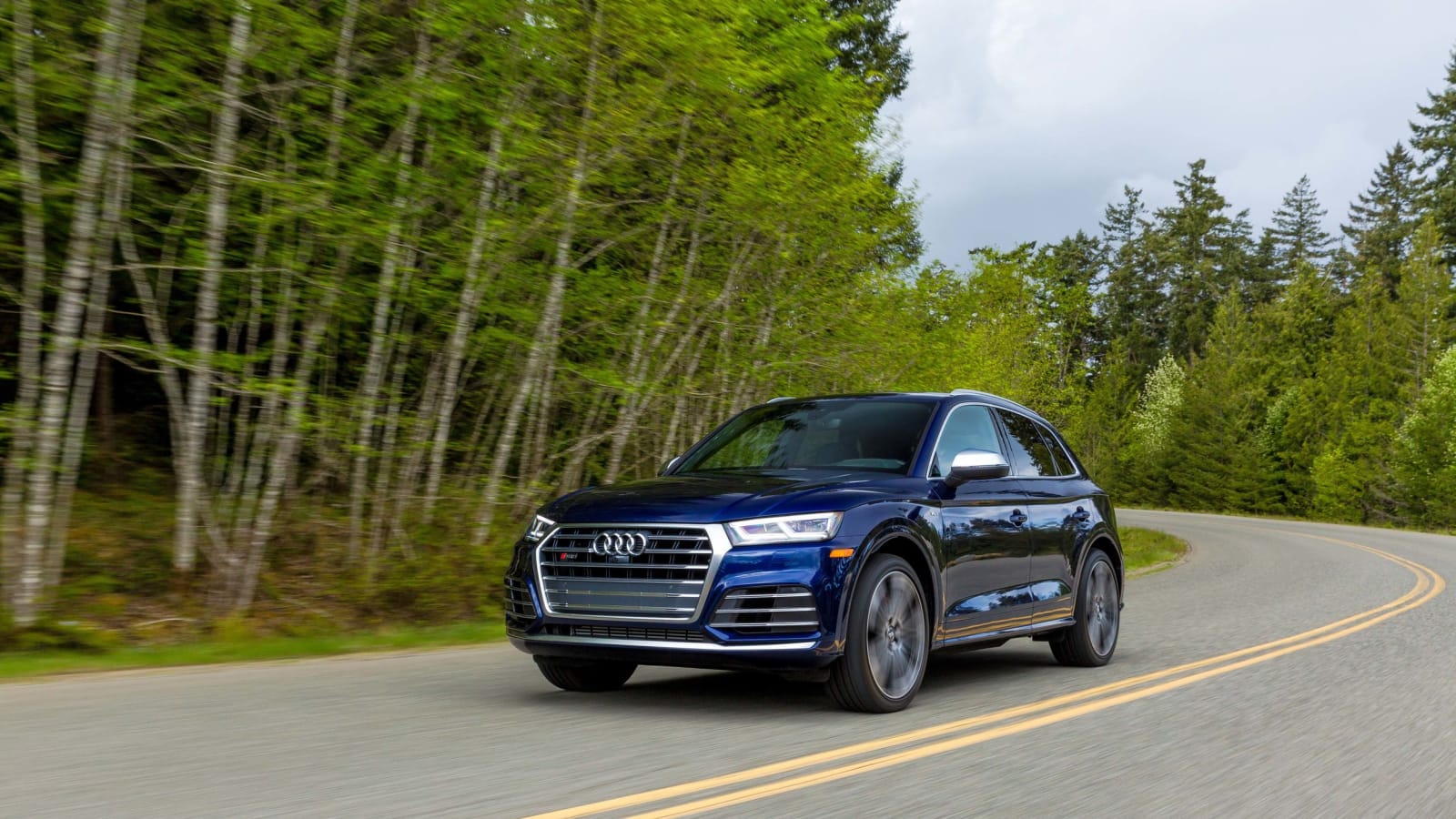 How much is the 2022 Q5 price and what features are available?

The Prestige bumps things up considerably in cost and equipment to include fancier exterior and interior lighting, acoustic glass, a power-adjustable steering column, heated rear seats, heated and cooled front cupholders, integrated navigation and a Bang & Olufsen sound system. Some of these upgrades are available on lower trim levels through packages or as standalone items.

The price breakdown for the Audi Q5, including the soon-to-be-launched Q5 40, is as follows: 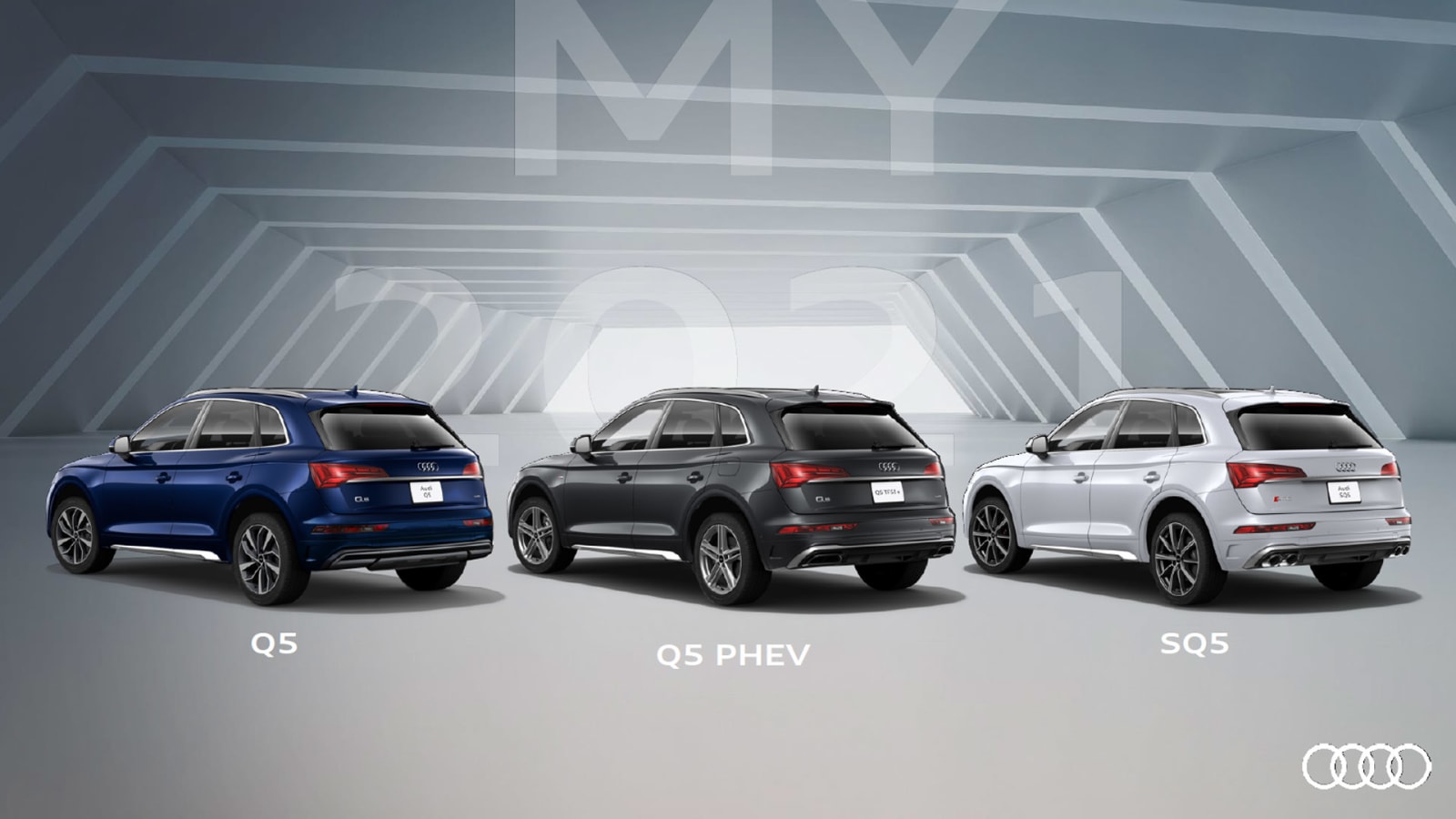 What are the Q5 safety ratings and driver assistance features?

The government gave the 2021 Q5 a perfect five stars in all categories but rollover where it got a totally normal four-star rating. We expect these scores to carry over for the 2022 model year.

The 2022 models carry over the Insurance Institute for Highway Safety’s highest “Top Safety Pick+” recommendation from 2021. The Q5 and Q5 Sportback earned top “Superior” ratings for crash protection and vehicle-to-vehicle crash prevention, and slightly lower “Advanced” rating for vehicle-to-pedestrian crash prevention. The headlights earned the top “Good” rating for the Prestige trim, and the slightly lower “Acceptable” rating for Premium and Premium Plus models.