The 2022 Nissan Pathfinder has 16.6 cubic-feet of space behind its raised third row. That’s basically the same as the Honda Pilot (16.5), a bit bigger than the Toyota Highlander (16.0) and a lot bigger than the Mazda CX-9, but a fair bit smaller than the Hyundai Palisade (18.0), Kia Telluride (21.0) and VW Atlas (20.6). All of those links go to their respective luggage tests.

Alright, so that’s how the Pathfinder’s cargo space compares to those on paper. You know the drill, here’s what it is in terms of actual stuff. 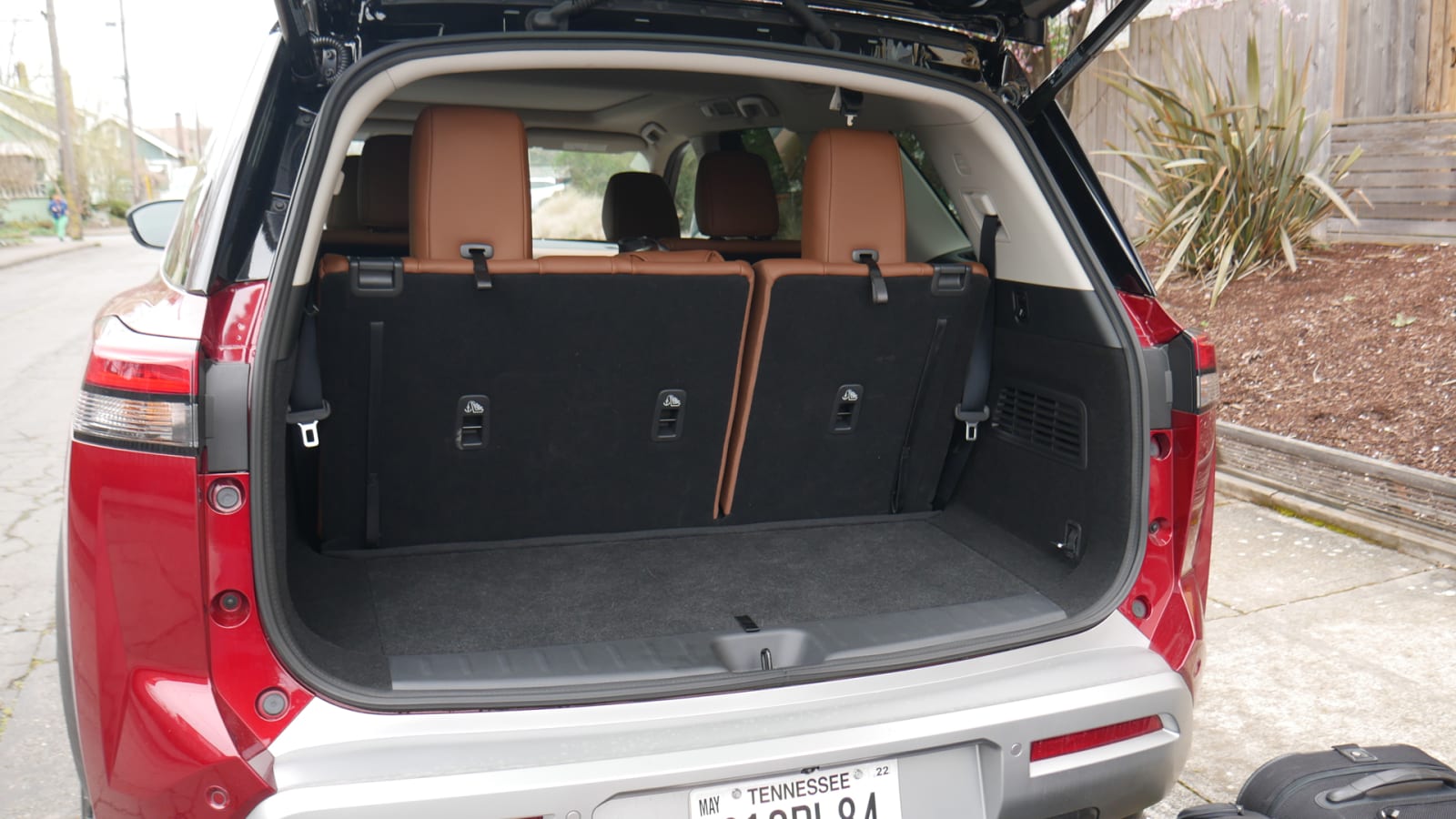 You know, not a lot to report here. This at least looks like 16.6 cubic-feet of space when compared to all those other SUVs. 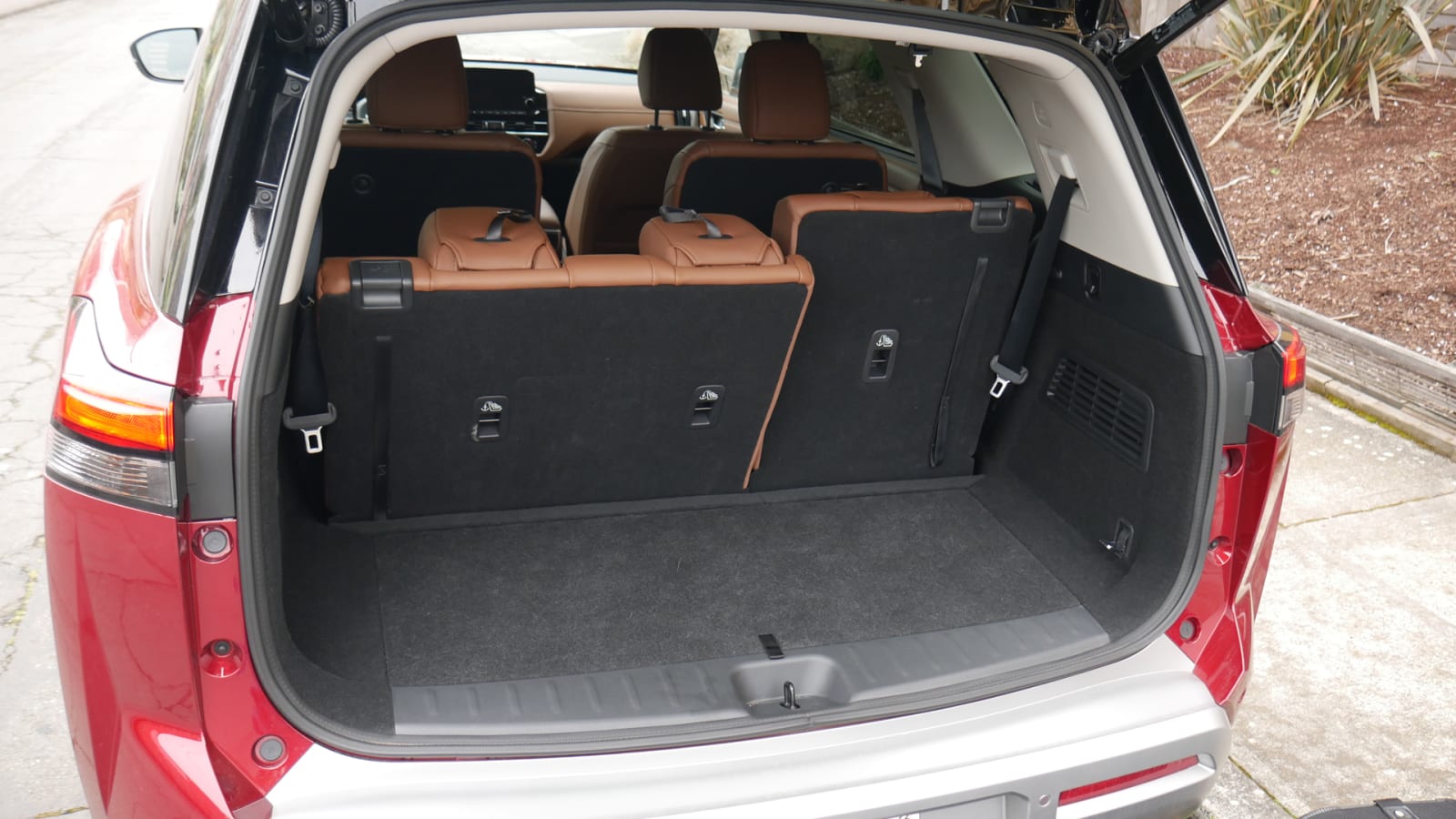 Like others, the Pathfinder’s third row reclines. You can see the recline range above. As always, I set the seat at an angle that seems comfortable enough for an average-sized adult or teenager to sit back there for some length of time. 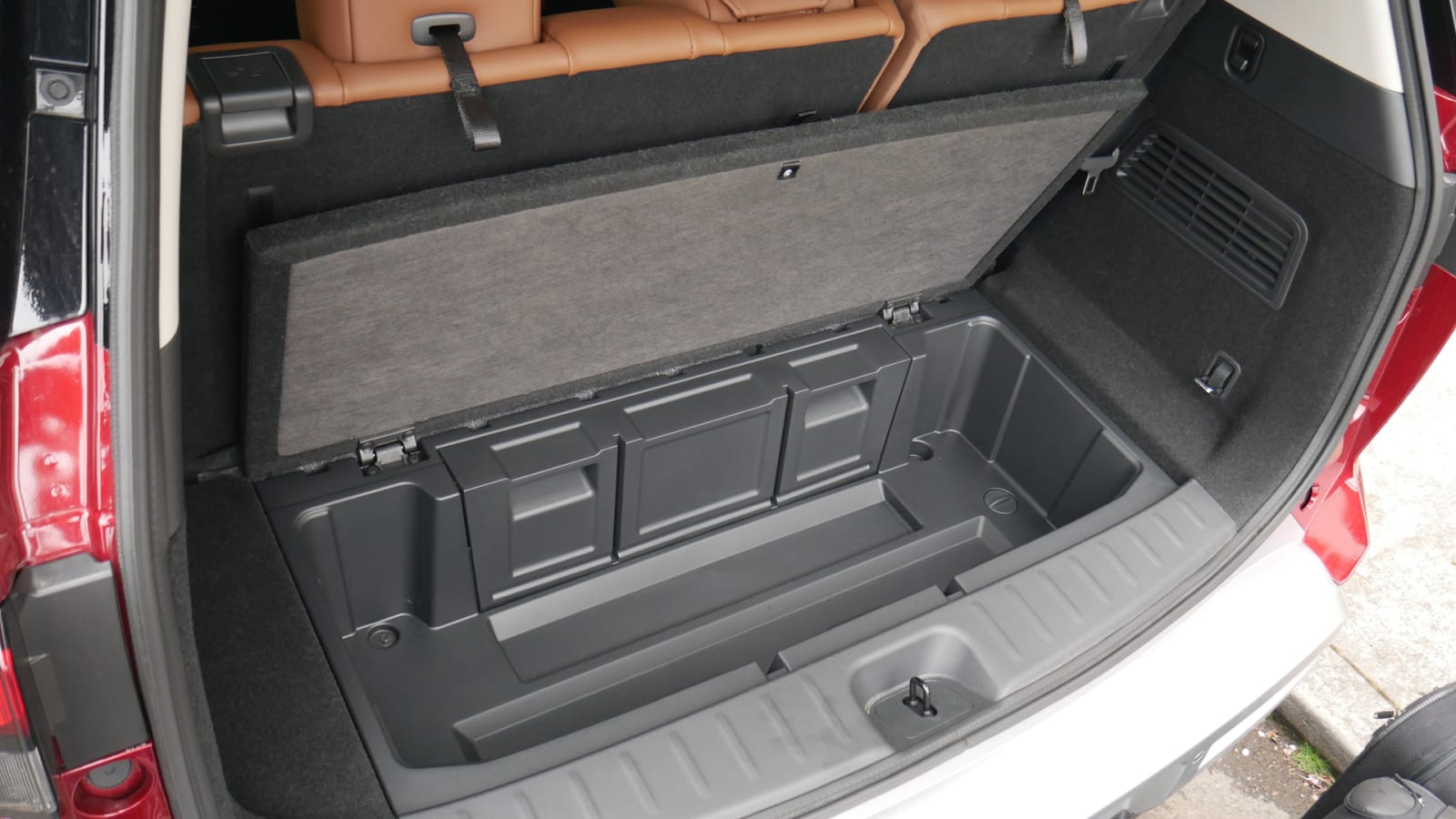 Second, the Pathfinder has underfloor storage, as others do in the segment. Unlike the Telluride and Pilot, however, that underfloor storage doesn’t really open things up enough to effectively expand the available space. It’s more like a storage bin. It’s also not as large as the Hyundai Palisade’s similar underfloor bin, which similarly doesn’t help in bag stacking. More on this later, though …

As with every luggage test, I use two midsize roller suitcases that would need to be checked in at the airport (26 inches long, 16 wide, 11 deep), two roll-aboard suitcases that just barely fit in the overhead (24L x 15W x 10D), and one smaller roll-aboard that fits easily (23L x 15W x 10D). I also include my wife’s fancy overnight bag just to spruce things up a bit (21L x 12W x 12D). 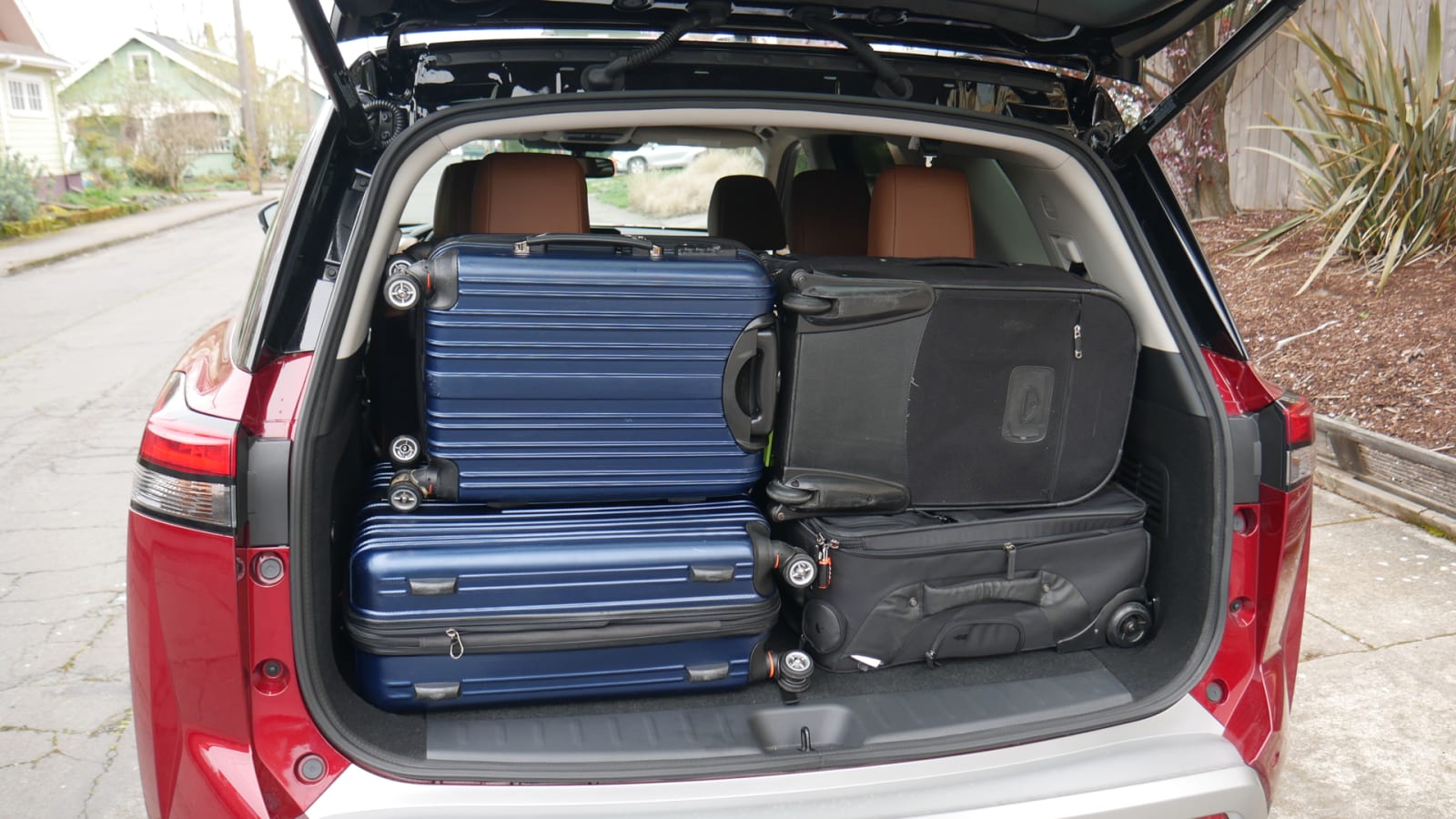 Here you go. This would be one of the large bags and all three carry-on bags. This is indeed better than the Highlander and CX-9 (neither can fit the bigger bag), but does fall short of the Palisade (it can swallow both big bags plus the two larger carry ons).

Ah, but there’s something missing! 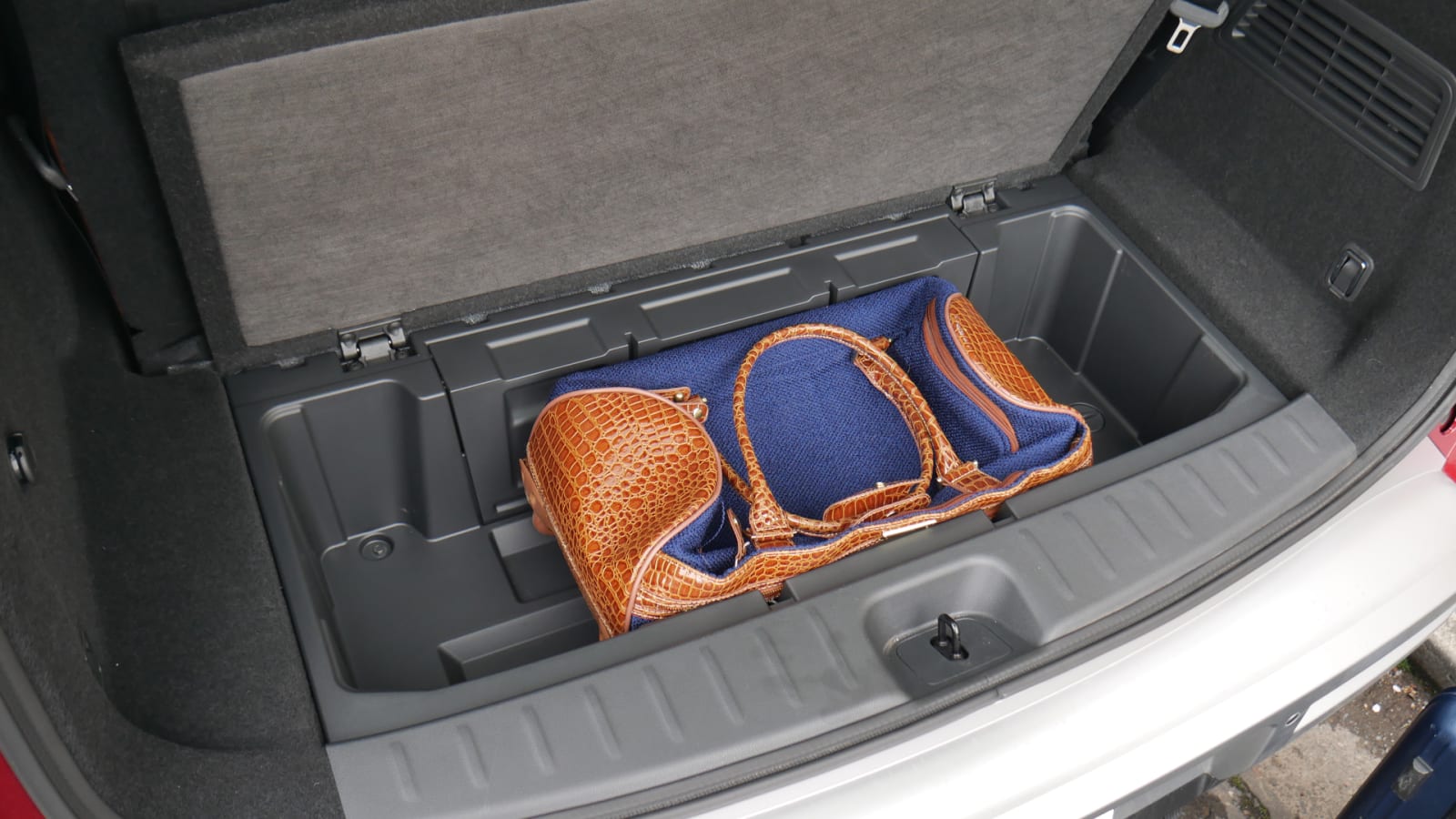 The under-floor bin is technically large enough to swallow the fancy bag. Sure, it’s crushed at the corners, but what’s inside would probably be OK, and if not this bag, the oft-featured blue bonus duffle bag also fits in here (forgot to take a picture). I suspect the Palisade also could’ve done this, but I tested that back in September 2019, so I don’t know for sure.

What I do know, however, is that the Pilot and Telluride take better advantage of their underfloor storage. By lifting or removing their floors, you can swell their capacity. The Pilot can hold the same bags as the Pathfinder plus the un-squashed fancy bag and almost certainly a second duffle. The Telluride, meanwhile, can fit all five of the biggest bags plus some odds and ends.

Where does that leave us? Well, pretty much where the specs say they should be, with the exception of the Pilot. Its more functional under-floor storage does give it a leg up over the Pathfinder despite near equal specs.