We’ve never considered the Lexus NX a leader in its segment. While a premium compact SUV promising Lexus reliability and finishes seems like a perfectly reasonable proposition on paper, the NX didn’t strike us as the proper execution of that philosophy. Well, it was redesigned from the ground up (What, you couldn’t tell?) for 2022 and now packs a new interior, vastly improved (but still imperfect) tech and a four-pronged powertrain offensive comprising two gasoline-only offerings alongside two hybrids.

While NX models powered exclusively by gasoline are perfectly acceptable transportation devices, we wouldn’t necessarily recommend them over any of their competitors. However, both hybrids offer powertrains that are not yet commonplace among small luxury SUVs. The NX 350h hybrid returns a whopping 39 mpg combined, which is exponentially better than its gas-only competitors, even if its acceleration is lacking. However, we particularly like the new NX 450h+, which largely shares its plug-in hybrid powertrain with the also-excellent Toyota RAV4 Prime. PHEVs in this space are few and far between, and with 302 horsepower and 37 miles of all-electric range, the 450h+ checks boxes most manufacturers can’t even advertise; only Volvo offers a compelling alternative.

While the NX may not look new, it’s in fact a clean-sheet redo based new, fundamental architecture that supports expanded electrification. This innovation has spawned a new plug-in hybrid model dubbed 450h+. The PHEV offers 304 horsepower and 37 miles of all-electric range and now sits atop the NX heap, with the standard hybrid slotting beneath it wearing a “350h” badge. There’s also a new base model featuring the same gas-only naturally aspirated four-cylinder as the Toyota RAV4. You can read more about all the changes in Autoblog’s NX first drive review. 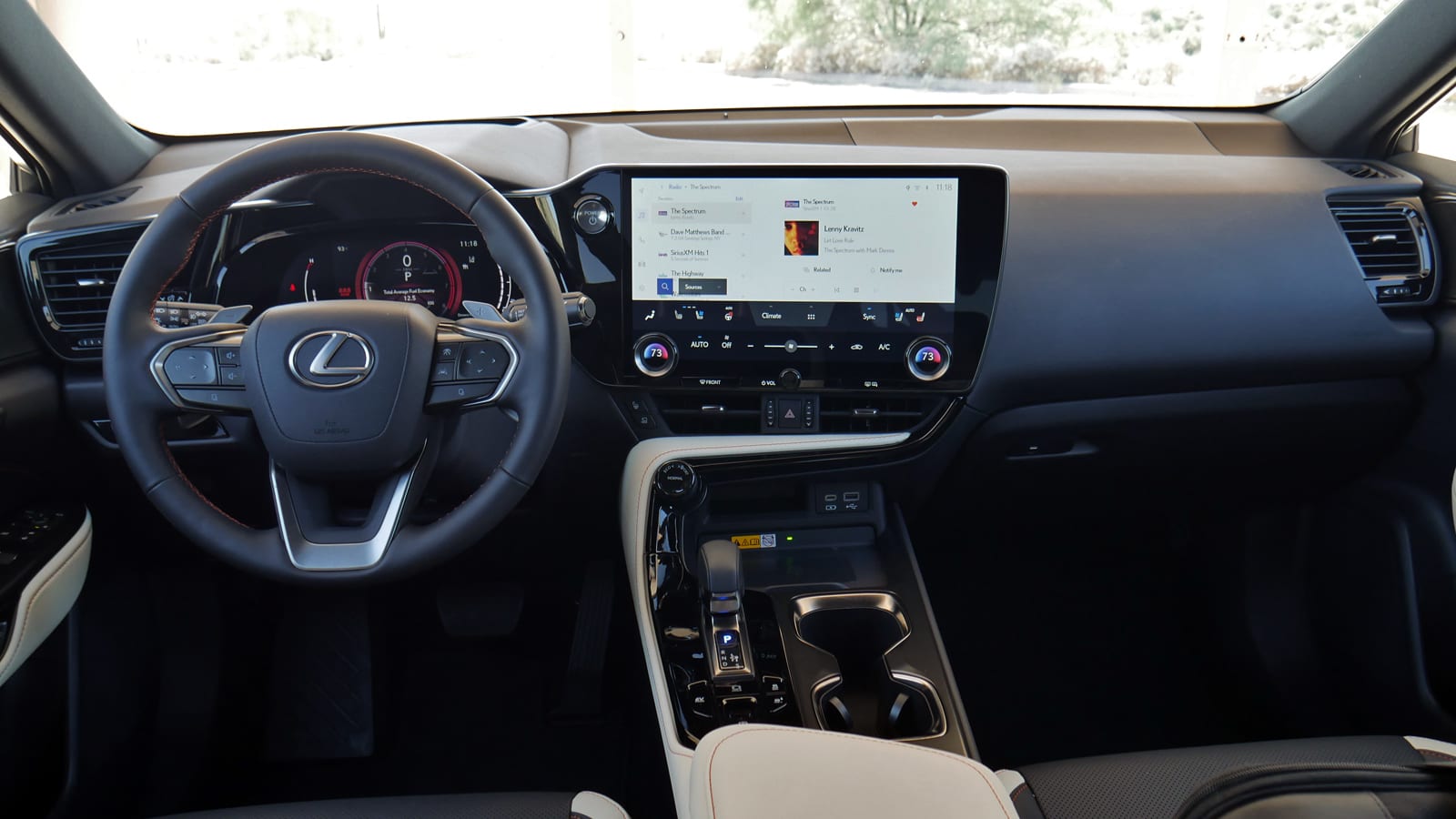 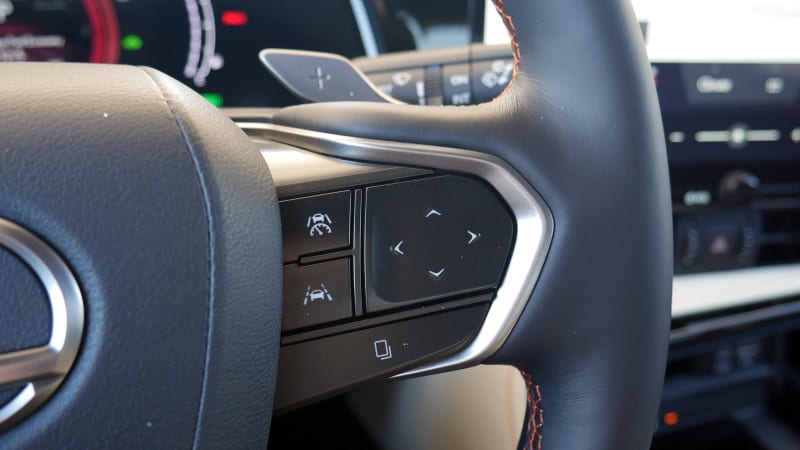 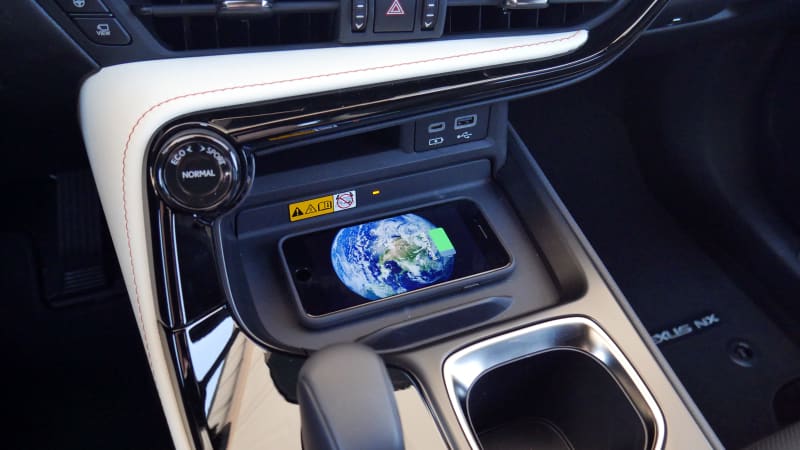 What are the Lexus NX’s interior and in-car technology like?

While it may be difficult to tell the second-generation NX apart from its predecessor from a quick glance at the exterior, the same cannot be side of the cabin. The 2022 NX sports a redesigned interior bereft of the silly old touchpad infotainment interface Lexus committed to when this very model was introduced way back in 2014. A new touchscreen (yes, touchscreen) unit sits atop a center stack that no longer juts into the front passenger space. Instead, it sits over a concave center console that houses a new, Prius-inspired gear selector. The basic layout shares virtually nothing with the mainstream Toyota RAV4 and the materials used are appropriate for a Lexus. That said, we could do without the silly electronic door handles.

While the redesigned cabin helps the otherwise-identical-looking NX from coming off as completely stale, the biggest upgrades are technological, not aesthetic. The new infotainment is powered by a standard 9.8-inch screen with dedicated physical climate control toggles or an optional 14-inch unit that incorporates a dedicated blend of touch-sensitive and physical comfort controls blended into the screen’s lower bezel. No matter which you choose, you get a physical volume knob. This represents a vast improvement over that found in the previous NX (and basically every other Lexus) but lacks split-screen functionality and some other basic items, like a dedicated home screen.

The infotainment screen is fitted to a panel that blends into the instrument display, which itself features a 7-inch screen. Sixty-four-color ambient lighting is available, along with wireless charging and a 10-inch head-up display (it’s controlled by unmarked buttons on the steering wheel, which is weird and can be difficult to use). There’s also wireless Apple CarPlay and Android Auto, integrated music streaming services such as Apple Music, a digital phone key, user profiles for car settings, digital rearview mirror, plus an AI assistant that responds to natural speech commands. 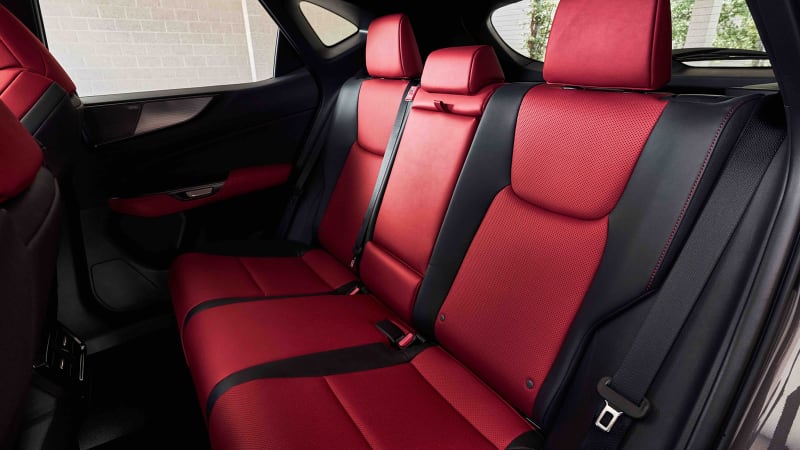 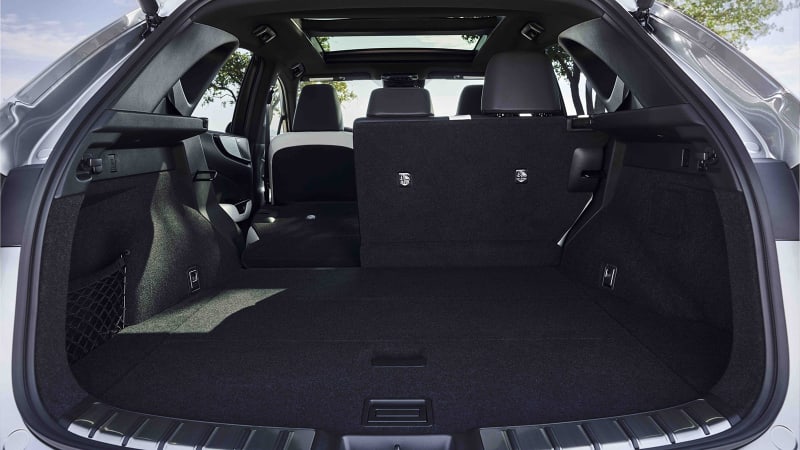 How big is the Lexus NX?

The Lexus NX fits into the compact luxury SUV segment. Populated by the likes of the BMW X3, Audi Q5, Acura RDX and new Genesis GV70, this class seems to grow larger every year — both in terms of the size of its constituents and the sheer quantity available. The NX itself gained an additional 5 cubic feet of cargo volume with its redesign but that did virtually nothing to improve its stature in a field where it remains one of the smallest entries, comparable to the likes of the Alfa Romeo Stelvio. In fact, although the NX’s exterior dimensions significantly exceed those of subcompacts like the BMW X1, Audi Q3 and Mercedes GLA, its interior dimensions are quite similar. In this way, it’s not unlike non-luxury midcompact SUVs like the Mazda CX-30. 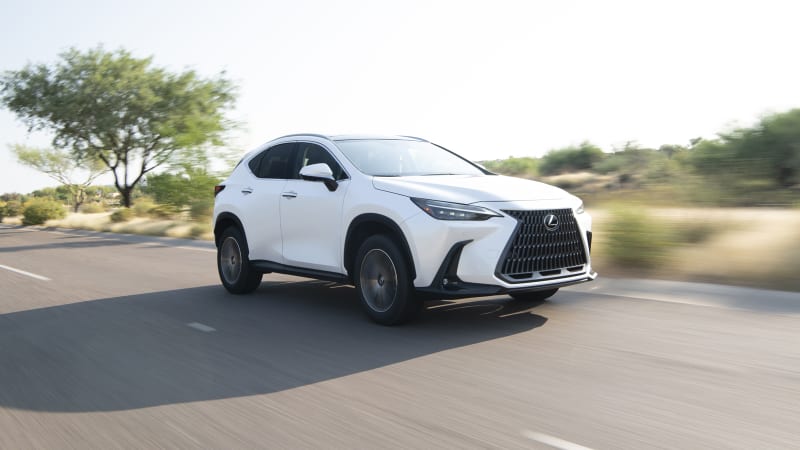 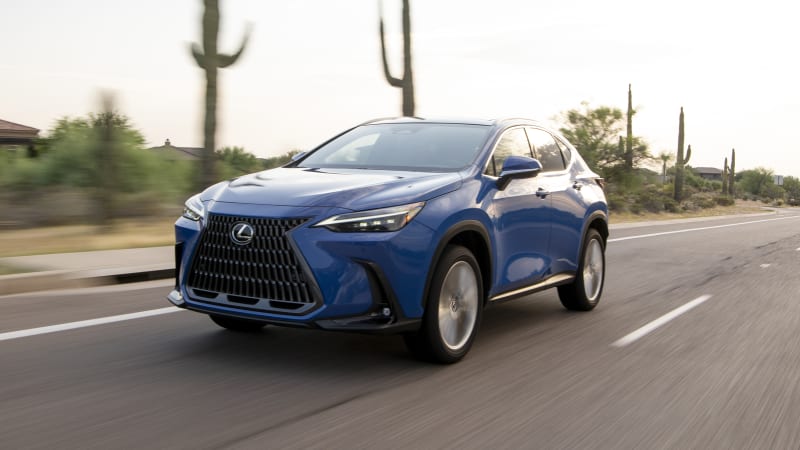 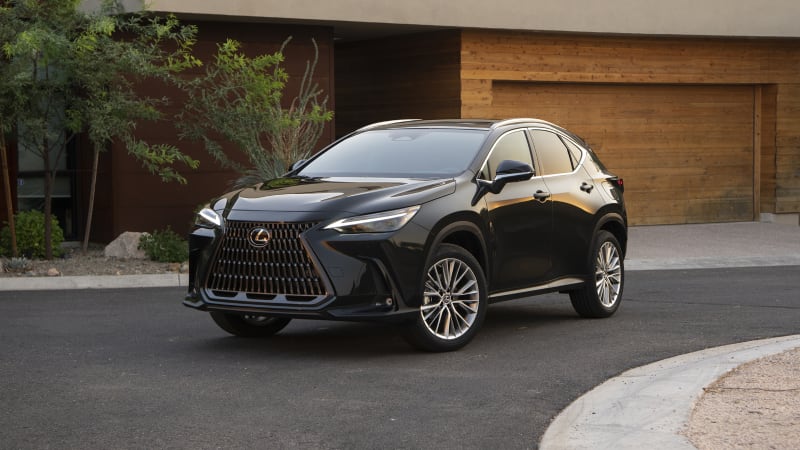 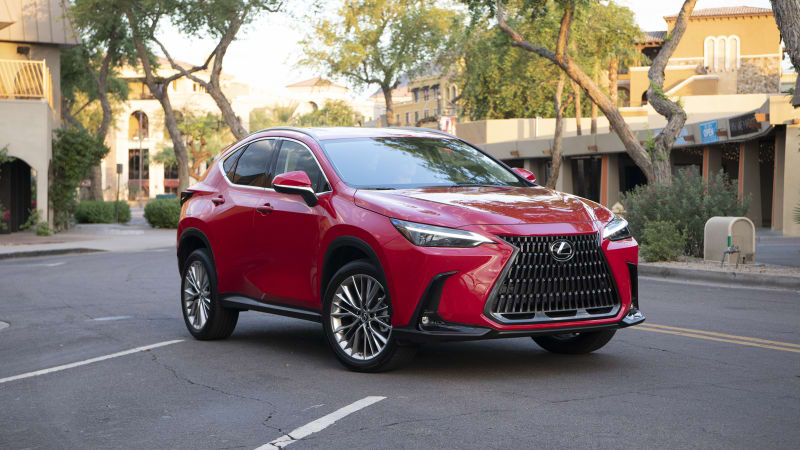 What are the NX’s fuel economy and performance specs?

The NX now comes with four available engines and is offered in both front- and all-wheel-drive configurations.

The new NX 250 (above, top left corner) has a 2.5-liter naturally aspirated four-cylinder. Paired with an eight-speed automatic, it produces 203 horsepower and 184 pound-feet – just as that engine does in its platform relative, the Toyota RAV4. With front-wheel drive, this is rated at 26 mpg city, 33 mpg highway and 28 mpg combined. Opting for all-wheel drive only costs 1 mpg (both city and highway), for final figures of 25/32/28.

The NX 350 (above, bottom left corner) and its new 2.4-liter turbocharged inline-four are good for 275 hp and 317 lb-ft of torque. That output exceeds the BMX X3 xDrive30i, Mercedes GLC 300 and Acura RDX, especially in terms of torque. Oddly, though, its estimated 0-60 time of 6.6 seconds is also about a half-second slower than the X3 and GLC despite its power advantage. It’s rated at 22 mpg city, 29 mpg highway and 25 mpg combined with its standard all-wheel drive.

Ultimately, the most appealing powertrain option is found in the new NX 450h+ plug-in hybrid (above, bottom right). Its electric motor provides the smooth, effortless punch expected of a PHEV thanks to its 304 total system horsepower. Lexus says the NX 450h+ can do 37 miles on electric power alone. Once that’s depleted and it starts behaving like a regular hybrid, you’re looking at 36 mpg combined. Yes, that’s down from the standard hybrid, but remember, you’re getting another 63 horsepower and a much bigger (read: heavier) battery.

A tow package available starting later in the 2022 model year allows the NX to trailer up to 2,000 pounds. 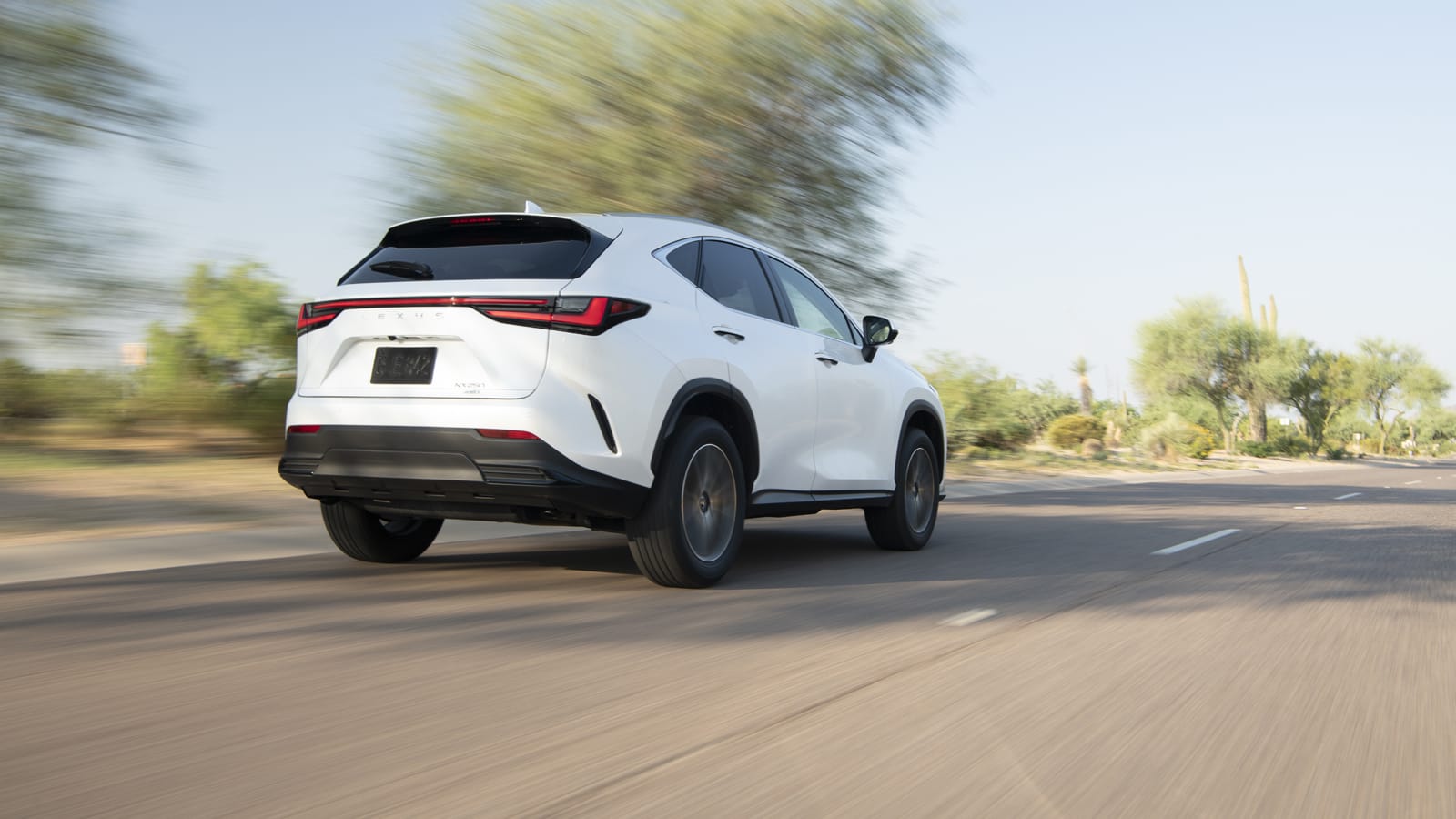 The NX’s powertrain overhaul transformed it from one of least-potent compact crossovers to one of the strongest on paper, but it’s still not really a performance-focused model. The 450h+ plug-in hybrid and 350 turbo are both powerful but heavy, and the softly suspended NX (even in F Sport guise) errs on the side of comfort. The seats are adequate, but we’d like to see more adjustment for the base position and perhaps some additional thigh support.

Apart from these quibbles, the NX is a generally pleasant drive. The ride is comfortable, though we’d caution you to skip the F Sport and its bigger wheels if that’s your priority, even if that package’s included adaptive suspension helps smooth out the rougher edges a tad. The NX’s short wheelbase relative to the competition should make it easier to maneuver in tight spaces, but its FWD-based powertrain mostly negates that advantage; its turning radius is virtually identical to the GLC 300’s.

What other Lexus NX reviews can I read?

2022 Lexus NX First Drive Review | Believe us, it really is all new 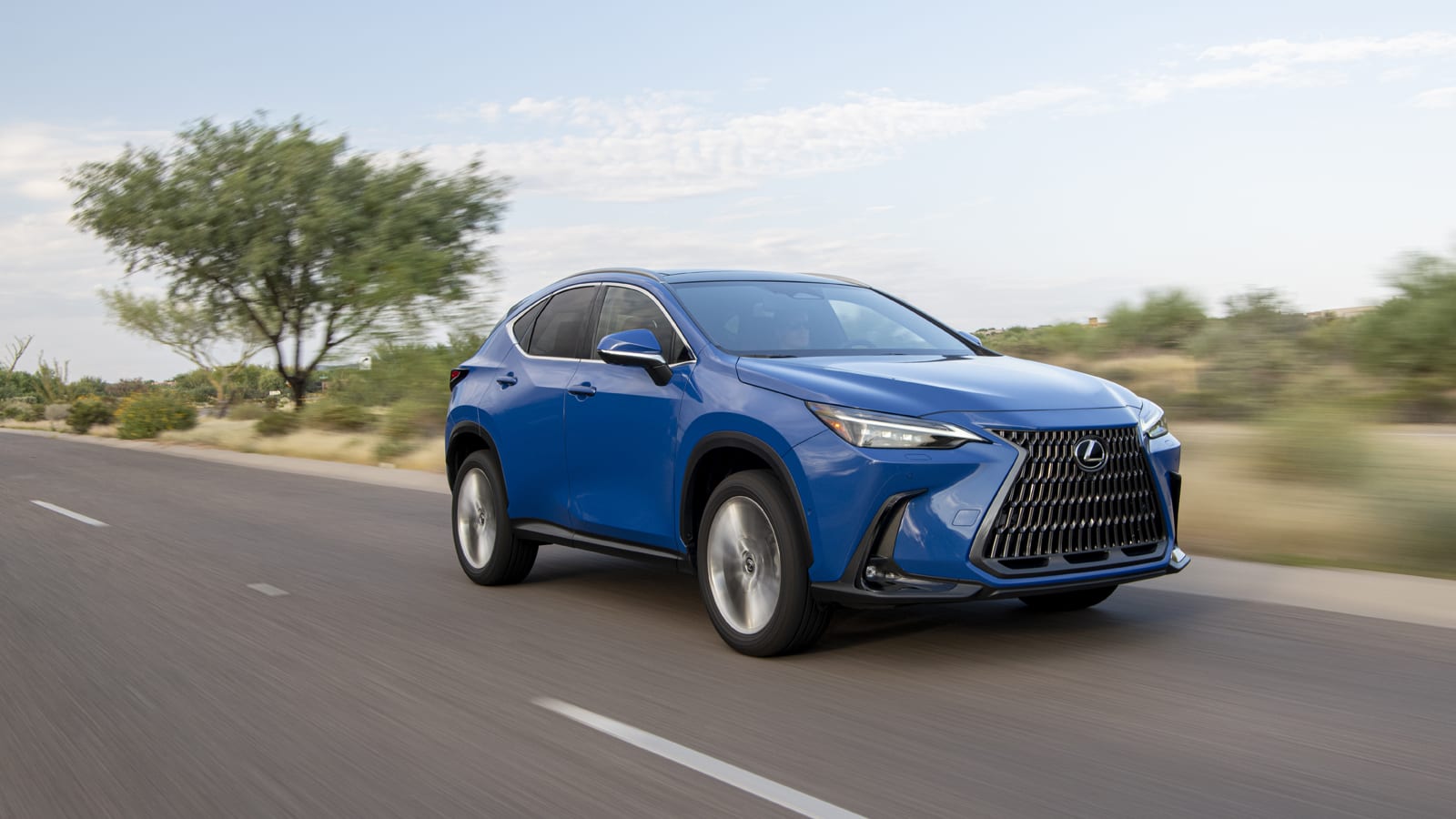 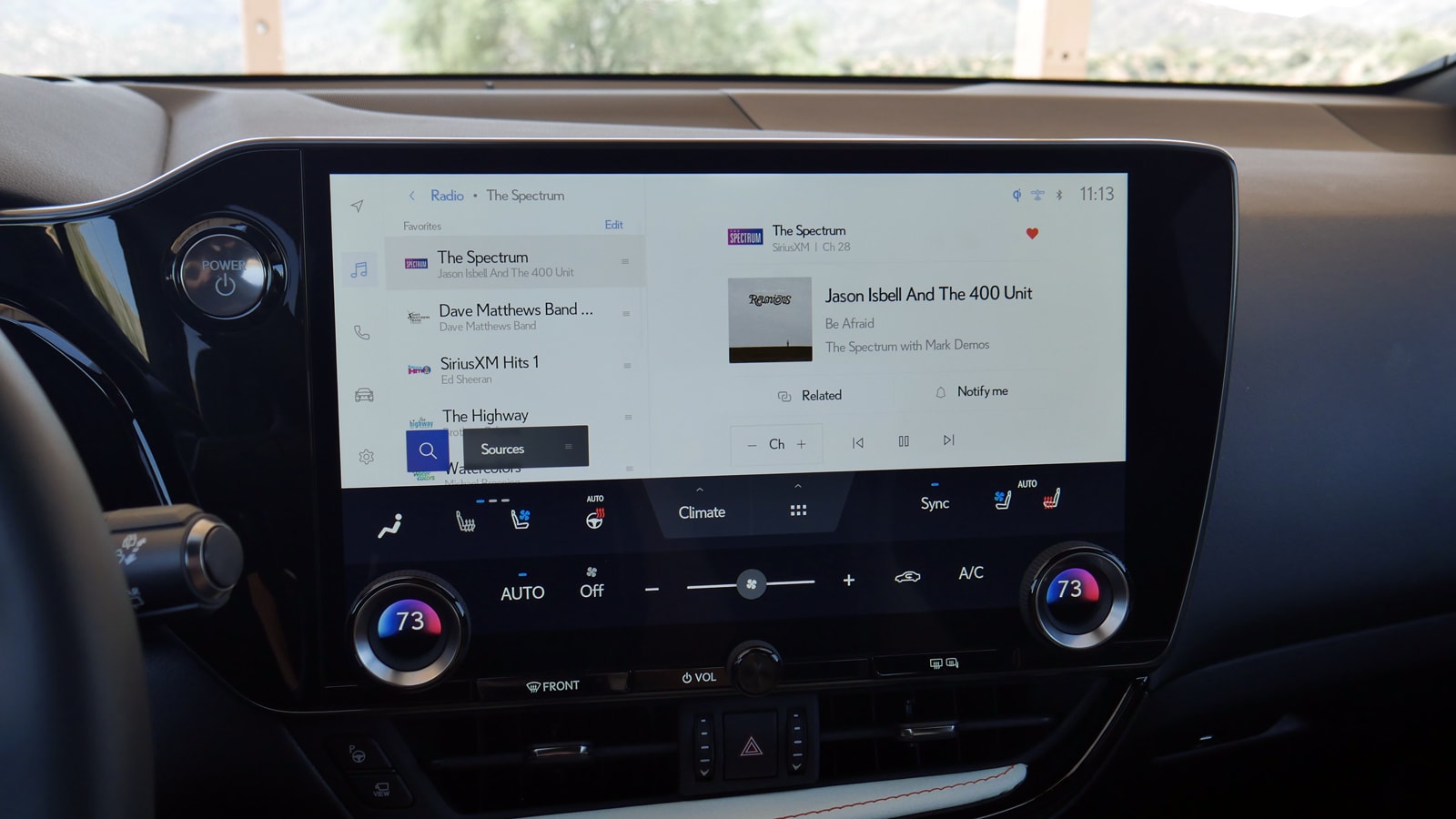 How much is the 2022 NX’s price and what features are available?

The NX can be had in six different variants, starting with the NX 250 at $39,025. This FWD model is fairly barebones, offering synthetic seating surfaces, eight-way power adjustable front seats, a 10-speaker audio system and wireless Android Auto and Apple CarPlay. LED headlights and DRLs are also standard, as are auto-dimming side mirrors.

Higher-end models are available with such luxury features as an excellent 17-speaker Mark Levinson audio system, integrated navigation (with the 12-inch infotainment system), a heated steering wheel and a power liftgate, among many others.

Each trim above the base comes standard with AWD and increasingly robust powertrains and interior packages. Both the turbocharged NX 350 AWD and the NX 450h+ can be optioned with an F Sport handling package. Here’s a full trim breakdown with destination charges included:

What are the NX’s safety ratings and driver assistance features?

The 2022 Lexus NX has not yet been crash tested by a third party but the previous model was awarded an IIHS Top Safety Pick+ for 2021 and an overall 5-star rating from NHTSA. We expect the new model to perform similarly.

Standard safety equipment on the 2022 NX includes adaptive cruise control with stop/start functionality; forward and rear collision detection, avoidance and automatic emergency braking; lane keeping assist and lane departure warning with steering intervention; automatic high beams and blind-spot warning. The car will also prevent you from opening the doors if it detects incoming cars and cyclists from the rear.